For Club and Country Around age 13, Michael Shackleton, DTM, decided to follow in the footsteps of South Africa’s great social justice leaders, such as Nelson Mandela, Tony Leon, Helen Suzman, and Colin Eglin. “I was inspired by their outlooks to bring people together and make positive contributions to the broader society,” Shackleton explains.

His aspirations included holding public office so he could join fellow leaders in enacting policies that would ensure a united, economically strong country for the next generation.

Now, at age 33, Shackleton has fulfilled many of his public service dreams, representing diverse constituents while serving in the local, provincial, and national levels of the South African government. He is one of only a few people in his country’s history to do so. Fittingly, in 2019, he was named one of the country’s 100 Young Mandelas of the Future by News 24, a major news outlet in South Africa. It’s a feat he says never would have happened without Toastmasters.

“Toastmasters has given me the tools I need to make my life a success. I always say that it hasn’t made me better than others, but it has certainly made me the best version of myself,” notes Shackleton, a partner in Shackleton and Mohapi Attorneys, a civil and criminal litigation firm in Pretoria.

Shackleton joined Open Society Toastmasters, also in Pretoria, in 2011, determined to overcome a serious stutter he had developed in his first year at the University of Pretoria, brought on by the devastating loss of his parents and looming financial hardships.

“It knocked my confidence and left me extremely anxious about how I’d go on in life,” he says. Fortunately, his paternal grandparents stepped in to pay study fees. Yet his stutter persisted, threatening his professional and political aspirations.

“When I joined Toastmasters, I had narrowly missed out on becoming a city councilor in Pretoria. It was clear that my stutter contributed in a big way to this scenario. It was also negatively affecting my job opportunities,” Shackleton says.

After polishing his speaking skills during three years of Toastmasters club and public speech experiences, Shackleton was elected a Pretoria city councilor.

“Toastmasters certainly helped me overcome stuttering in public speaking by placing me in many situations, such as speaking to small and large crowds, and even being interviewed on the radio,” all of which were significant confidence-boosters, he says. Shackleton was later recognized by an international youth organization as an outstanding South African for his accomplishments, including mastering his stutter.

Shackleton has continued as a dedicated Toastmaster. He is 2021–2022 Area Director for Y4 in District 74, overseeing four corporate clubs and one community club. He serves on the District Ethics Committee, and is a founding member of South Africa’s Midrand Groundbreakers in Midrand, and a member of Accenture Toastmasters Club in Johannesburg. He has held numerous club offices, countless meeting roles, and is a frequent guest speaker in his community.

He also set his sights on higher public office. He studied law, following the careers of his political heroes, Nelson Mandela and former Parliament member Tony Leon. Shackleton completed his master’s degree in constitutional and administrative law in 2017. The following year he became a member of South Africa’s Parliament, taking a seat in the National Assembly. In a country of 57 million people, only 400 citizens are allowed at any one time to occupy one of these seats for a five-year term.

He completed his public office trifecta in 2019, when he became a member of the provincial legislature in his province—Gauteng—the economic hub of South Africa.

Shackleton is determined to work within South Africa’s decision-making bodies to repair what he calls his country’s “deeply divided and fractured past.” He credits Toastmasters for giving him the skills, vision, and confidence to serve his country.

“Toastmasters has given me the ability to make public speeches in legislative houses and communities and to genuinely listen to community members from all walks of life, to take up their issues and deliver. In South Africa, we have 11 different official languages, all racial groups, and multiple religions. Political and even daily success in ordinary life depends on harnessing the very best of diversity and living harmoniously across socioeconomic and racial lines,” he says. “Toastmasters promotes respect for diversity and the innate talent that we all have.” 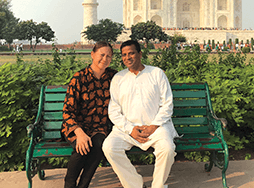