Onstage mishaps can be mortifying. But you can rise above an unwelcome surprise.

Have you ever experienced an onstage mishap? In this entertaining Toastmasters Podcast episode, Caren S. Neile shares her personal “oops” moments and gives tips on how to overcome an unwelcome surprise.


I still dream about my most embarrassing public speaking experience. But at least I no longer wake up screaming.

Picture a luncheon crowd of 200 women. Now, imagine a stage so wide that as someone with a very small frame, I feel that I have to do something spectacular to fill it. To make a point, I run across the floor in my high heels. And I fall. Spectacularly. The audience gasps. All I want to do is get up and run once more—this time to my car.

Happily, the story doesn’t end there. I pick myself up, make a joke, and go on with the presentation. Everything is under control. The nosedive is apparently forgotten. Then, for some reason I will never understand, toward the end of my speech I start to take off across the stage once more. As I lift my left foot, all the women cry out in unison, “Don’t run!”

I have never brought together an audience so well.

Let’s face it: We all mess up sometimes. And even when we don’t, things happen beyond our control. As in the case of the speaker who suddenly had to dash to the restroom in the midst of a major speech—more about that later—the key to speaking success is not to learn to be perfect. It’s to expect the unexpected.

“The more I’ve learned to laugh at myself and let the crowd laugh with me,
the easier it has been to turn mishaps into magic.”

Turns out I’m not the only one who has fallen onstage. So have the megastar singers Harry Styles and Pink. Music legend Madonna and guitar ace the Edge, from the Irish supergroup U2, fell off the stage. Former U.S. President Barack Obama fell climbing a stage, as did Oscar-winning actress Jennifer Lawrence on the way to accepting her golden statue.

Then there’s South African Toastmaster Verity Price, DTM, who in 2007 was touring her country—talking about a record she had made—with a renowned motivational speaker. In Johannesburg, she listened to him give her a “rock star” introduction to the enormous crowd.

“I felt like I had finally hit the big-time,” says the Cape Town singer and speaker. “I bounded up the stairs, only to trip on the final step and sprawl headfirst across the stage. The oxygen was sucked out of the room as 600 people gasped in unison.

“But without missing a beat,” she continues, “I looked up from the floor and said into my headset, ‘Well, folks, I can only go up from here!’ The crowd roared with laughter as I gathered myself up off the floor, dusted myself off, and started my talk. They were so relieved that I was okay with what had just happened, it created instant rapport with 600 strangers.

“When I finished,” she adds, “more than half the room signed up for the album I was selling.” So it’s not just you who has been, or will be, the butt of a blooper. And not all of them involve falling. International pop star Justin Bieber once vomited onstage. Beyoncé’s hair got caught in a fan in the midst of a performance, and singer Demi Lovato accidentally pulled off their own hair weave.

What to do if you want to avoid such ego-busting experiences? As you can imagine, the experts agree that an ounce of preventing embarrassment is worth a pound of overcoming it. So first, speak often. When you have enough experience onstage, you can more easily think on your feet. Do you suffer from performance anxiety? Set about mastering techniques to control it.

Then, prepare your speeches so well that not only will you be less apt to forget them, but you will also be calm enough to recover should anything go awry. Finally, check out everything you can beforehand. Is your outfit in good shape? (Heel not loose, zipper closed, button not about to pop off?) Did you bring everything you need so you don’t have to count on the venue to supply it? Did you check the microphone, and is there a spare battery available if necessary? Are your props close at hand? If you use them, is your stool and/or easel sturdy? Is your marker fresh? Or is the PowerPoint all set?

To ensure that you are prepared, you might even make yourself a simple checklist. And by all means, it’s a good idea to refrain from eating and drinking a lot before presenting. (I’m looking at you, Justin Bieber!)

“A few years ago, I walked into an Evaluation Contest just as the doors were closing,” he recalls. “So did another member. Seeing us both, the contest chair announced, ‘And just in the nick of time, here’s our test speaker.’”

An error can actually make the audience empathize with you.

The contest chair then called over Daroowala and quietly reminded him that he had agreed a month earlier to locate a test speaker. Unfortunately, he had completely forgotten. Was he embarrassed! So what to do at the 11th hour?

“As a seasoned Toastmaster and serial contestant,” he explains, “I instantly recalled World Champion [of Public Speaking] Craig Valentine’s famous advice: ‘You don’t get ready, you stay ready!’ I instantly offered to be the test speaker and pulled out a story I’d told before.” How to Defuse Embarrassment

Sometimes the best-laid plans just aren’t enough. We can’t always anticipate what can go wrong. So here’s a quick guide to help with those inevitable embarrassing moments. When you become familiar with these tips, you will be able to choose the right response to a situation at a moment’s notice. (Notice that the first letters of the six points spell “mellow.” Learn to stay mellow, and all will usually work out just fine.)


Move on from it.

Remember, the audience doesn’t know what you’ve planned. If what you omitted or misspoke isn’t important, simply ignore it. But if you’ve forgotten something that’s essential to a speech, don’t get embarrassed! You can always say, “Now what I haven’t told you yet is ...” This makes you seem clever for building suspense. And if the audience can’t miss the problem, like hearing a loud burp, simply don’t make a big thing of it, and they won’t either. Excuse yourself, and continue. You are the guide for your speaking safari. If you show that you are in control, your listeners will feel safe. In fact, an error can make them empathize with you. That’s because nine times out of 10, your audience doesn’t want you to fail. That would make them nearly as uncomfortable as it would make you.

If we forget a name or a date, or misstate something, we can usually get away with something like, “I always forget that because ...” Maybe you meant to say “Eleanor” and instead you said “Phyllis.” No worries. You can always say, “I always call her that because she looks so much like my Aunt Phyllis!” (Unless you’re speaking in a court of law, a little white lie can be forgiven.) Or if you left a prop at work, you might say, “Imagine the ball that is at this moment sitting on my desk because I ran out of the office so quickly to be here on time.” We can all relate!

“I’ve learned that when you are okay with things not being okay, then not much can actually embarrass you,” says Price, the South African speaker. “The more I’ve learned to laugh at myself and let the crowd laugh with me, the easier it has been to turn mishaps into magic.”

If you’ve got a natural sense of humor, and if the mood of the room is light, or needs to be lightened, go ahead and joke about the problem. Your slip falls to the stage from under your skirt? Try saying, “Oops! At least it’s not a pink slip [a metaphor for getting fired]. I just hope that doesn’t come next!” Or there’s the old standard for anything embarrassing that happens: “Believe it or not, I planned that!”

Okay, so I didn’t immediately learn not to run across the stage (Did I mention I was wearing high heels?), but I certainly won’t ever do it again. Ever.

Joyce Kaduki, DTM, of Kwanza Kenya Toastmasters in Nairobi, Kenya, once forgot her speech halfway through her club’s International Speech Contest. After blanking out for about 20 seconds, she left the stage. Although she felt mortified, the audience applauded her, which she found extremely encouraging. Then, after the other contestants took their turns, she returned to deliver her speech in full. She was not entitled to earn a ribbon that day, but she did gain valuable lessons about preparation.

“First,” says the former Area Director, “I learned that it’s always better to internalize, rather than memorize, a speech. That way, there will be no pressure of remembering word for word, and it gives the speaker the flexibility of substituting words or phrases should they forget something.

Think of a way to make use of your embarrassing moment in your speech. What did the woman do who urgently had to use the restroom in the middle of her presentation? She asked the audience a probing question, walked offstage, did what she had to do, and returned to supply the answer. Everyone thought it was a brilliant device for building suspense!

Even if you can think of no way to fix the error, it may help you to remember this: Yes, public speaking is important, but it’s generally not a matter of life and death. Try to put the incident into perspective. You, and your audience, will get over it.

So although none of us actually welcomes onstage embarrassment, if we think of it as one more speaking challenge to overcome, it can help us become more effective speakers. For my part, I’ve never fallen onstage again. To my knowledge, former President Obama, Madonna, and the Edge haven’t fallen again, either. And remember Verity Price? She did better yet. She went on to win Toastmasters’ 2021 World Championship of Public Speaking. So if you’ve experienced speaking embarrassment, you’re in great company. As Verity would say, you’ve got nowhere to go but up. 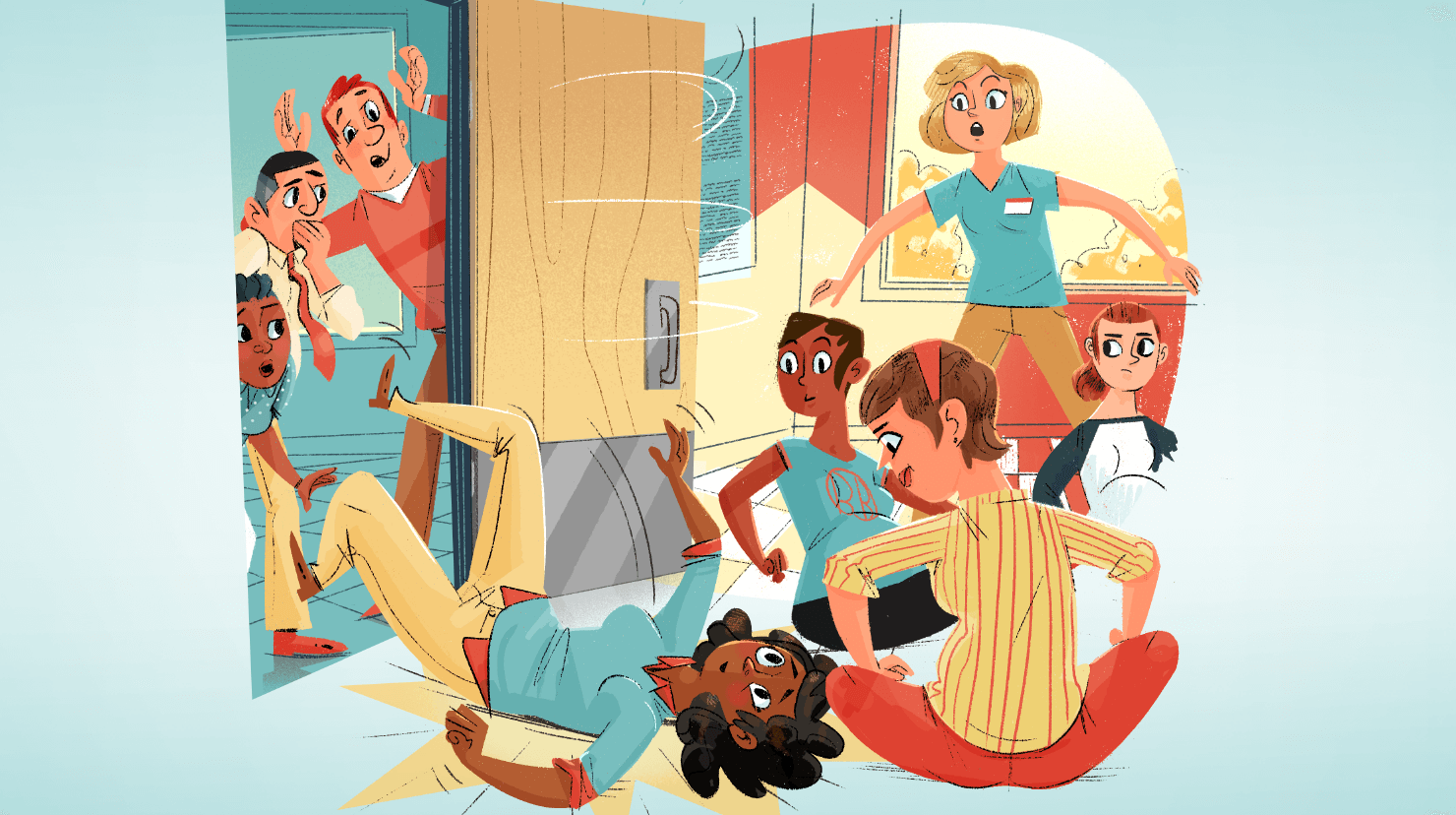 In a 2019 Toastmaster magazine article, Manoj Vasudevan, DTM, 2017 World Champion of Public Speaking, shared his own embarrassing speaking memory from which he learned a valuable lesson. He spoke at an event promoting Toastmasters that began at 7:30 in the evening. Vasudevan was the last to speak, and by the time he took the stage, it was 9:30 p.m.

Vasudevan had given this presentation before and received adulation, so he was confused when he noticed audience members were disengaged and almost falling asleep. As he put it, “Then it dawned on me: When I previously gave this presentation it was daytime. I hadn’t adapted the speech to a tired and sleepy audience.

“The experience was embarrassing, but it was helpful later in winning the 2017 Toastmasters World Championship of Public Speaking. In 2017, for the first time ever, the championship was held at night. When I took the stage at 9:30 p.m., I could sense that people in the room were tired and sleepy—but I had come prepared for that. The prior embarrassment was a blessing in disguise.”