The Power of First Impressions

In just seven seconds your audience will make assumptions about who you are. It only takes seven seconds for someone to look at you and form assumptions about your age, education, economic level, profession, heritage, and more.

For speakers, that means when you approach the lectern or take center stage, the audience sees more than just clothes, accessories, or makeup; those seven seconds are an opportunity to present who you are as a person as well as an effective communicator. Appearance is identity. How do we acknowledge and respect that?

Jill Swanson has 40 years of experience in fashion. She explains that the eye automatically searches a person’s face for a particular color and zones in on it. “If you’re wearing a red shirt, right away someone will notice your red lipstick,” she says. “If you have brown eyes and wear a brown shirt, that helps hold the person’s gaze a little longer.”

Swanson believes everyone has a signature color. “Color is huge,” she says. “Find out what your signature colors are—hair color, eye color, lip color. Look in the mirror and find something similar to your eye color for starters. Most of us have more than one color in their eye.”

Gianna Abao is a content creator from the Philippines, and was the 2021-2022 Vice President Public Relations of Manila Metro Toastmasters Club. She is a firm believer in the power of first impressions, and that emphasizing your strongest features is key in making that first impression last, especially on TikTok or Instagram, the social media platforms her club uses most often in marketing and outreach.

Let your own identity shine through in your speech. Let the audience get to know you and embrace who you are.

She considers her eyes to be her strongest feature.

“I like my eyes to be expressive,” she says. “When I do my makeup that’s where all the colors pop, as compared to my lips that are usually a nude color, like my cheeks.”

After you’ve achieved a certain level of comfort onstage or at the lectern, Stephanie Thomas, a Los Angeles-based consultant who works with actors and entertainers, recommends you standardize the look you’ve chosen for yourself. Find components of your style that become your go-to items, like a favorite shirt or tie.

She suggests practicing in front of a mirror to check clothes and makeup. If you wear something that shows bare shoulders or arms, don’t ignore that aspect of your appearance, she advises.

“Select colors that look great on your skin,” she says.

Thomas, a fashion expert, styles clients for events like the Oscars. She is also a professional speaker and reminds Toastmasters of the most important aspect of public speaking.

“The beauty in speaking is when you bring yourself to your speech.”

In 2019, Aaron Beverly became Toastmasters’ World Champion of Public Speaking while wearing a traditional Indian outfit. That would be unremarkable were it not for the fact that he is not Indian. In an auditorium filled with people from all over the world wearing their own nations’ traditional clothing, he might have come off as play-acting, treating the outfit as a costume. However, as his speech immediately made clear, he was about to tell his story of traveling to India to play a special role in his friend’s wedding. Wearing that outfit was impactful, effective, and ultimately, the apparel of a winner.


Wearing clothing or accessories from a country, culture, or religion other than your own carries the risk of seeming to misappropriate or misinterpret an outfit that is meaningful to someone else. Awareness of and respect for cultural and religious identity are crucial. In the pop culture arena, performers Selena Gomez and Katy Perry, among others, have been criticized for wearing a bindi, the jewel worn by many Hindu women between the eyebrows. In Hinduism, the bindi is a reminder to always keep God in mind and ties to the belief that all people have a third eye looking inward. Wearing it as an accessory risks insult to some people.

Ramona J. Smith, the 2018 World Champion of Public Speaking, says she always prepares for a speaking engagement in another country by researching beforehand.

“You just have to ask,” says Smith. “But not YouTube and not someone who’s never left the continent, but the people who are actually inviting you. If I’m going to a Muslim country, I’m asking questions before I even fly out, like do I need to cover my head, is there anything I need to be mindful of, any clothing that I shouldn’t wear?”

Terri Morrison and Wayne A. Conaway, the authors of Kiss, Bow, or Shake Hands, advise readers that in most of Asia, white is associated with death and funerals. So showing up onstage with a white carnation in your lapel might be concerning. Red and gold are considered lucky colors. Yellow connotes majesty, the authors write:

“Perhaps because of its association with gold, yellow was historically reserved for the highest-ranked people in Asia. In ancient times, only the emperor was allowed to wear yellow. This is no longer the case, although business attire is still in generally subdued colors.”

Remember those seven seconds? Don’t waste them trying to mimic the emperor.

While there is plenty of advice available about how to dress when speaking, you may find that the way we’re perceived can sometimes go beyond dress and is sometimes out of our control.

Tiffany Yu is a professional public speaker based in San Francisco, California. She was in a car accident at the age of 9 that killed her father and left her with one arm paralyzed and one of her legs disfigured due to severely fractured bones. She has learned to embrace who she is and focus on what she wants to do instead of how she is perceived. “I often talk about how this is the body I’ve been gifted from the universe because if my disability or the way that my body healed wasn’t supposed to be like that, then it wouldn’t,” says Yu.

Like other speakers with disabilities, it may be more than her well-tailored outfit that catches audience attention.

Sean Lawton, founder of Collective Speakers in Boulder, Colorado, represents speakers with disabilities. He finds that audiences sometimes have a monolithic view of disabled people, and often expect a disabled speaker to come to an engagement with an inspirational story, no matter what the actual topic is. And standards for appearance can be demanding.

“Dress is definitely an issue,” he adds. “Sometimes disabled speakers are told: ‘Tone down your disability.’”

That is not an option for Imani Barbarin, who has cerebral palsy and walks with metal crutches. Of course, mobility devices like crutches and wheelchairs aren’t attire, but they are part of a speaker’s appearance and can have a powerful impact on how he or she is perceived–and in turn, how comfortable a speaker using such devices feels in front of his or her audience. This may start within those first critical seconds when the audience initially sees the speaker. Barbarin’s crutches can be an unwelcome attention-getter. When she gets near the microphone, they can cause ear-splitting feedback.

People with disabilities don’t need to ignore their appearance—quite the opposite. Yu used to wear a standard muted business suit when she worked for an investment firm, but now that she has transitioned to a new career, her appearance reflects her mood.

“The beauty in speaking is when you bring yourself to your speech.”

“I experienced this trauma as a kid so now as a 34-year-old I say yes, we’re talking about disability and social justice, but it can also be fun,” she says. “I actually want that reflected in the clothing that I wear as well. I like to wear big colorful earrings because usually my hair is a little shorter and it’s black, so it stands out.”

She gives other speakers the same advice.

“If your preference is to wear a rainbow-colored dress and that makes you feel confident, then that’s great,” she says.

In the November 2016 issue of the Toastmaster, Christine Clapp, DTM, addressed some of the myths surrounding the World Championship of Public Speaking®. Among them was the idea that non-native English speakers and people who speak English with an accent cannot win. She countered this myth by pointing out the success on the championship stage of both Saudi Arabian Mohammed Qahtani, DTM, 2015 World Champion, and Darren Tay of Singapore, 2016 Champion. Neither was a native speaker of English and both spoke with accents. Same for Shurooq AlBanna, who, clad in the traditional clothes of her country and faith, was the first Arab to place in the championship when she came in third in 2013.

Follow in these champions’ footsteps—whatever your hairstyle, makeup, abilities, choice of clothing, or cultural background. Let your own identity shine through in your speech. Let the audience get to know you and embrace who you are. Let those seven seconds—and the moments that follow—work for you. It’s the best way for the speaking stage to bring us together.

As Beverly said in the conclusion of his championship speech, “Open your culture, your mind, your heart, to people who are different from you. Show the world that acceptance despite difference is not an unbelievable story.”

What is your audience thinking as you walk to the platform to begin your presentation? 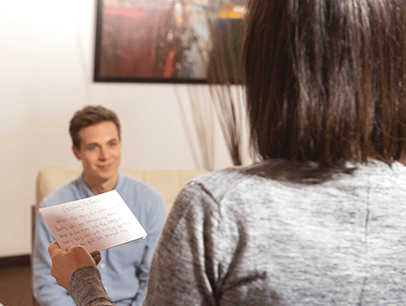