How to Persuade Others

Learn about your listeners, tailor your speech to their needs ... and brush up on your Aristotle. 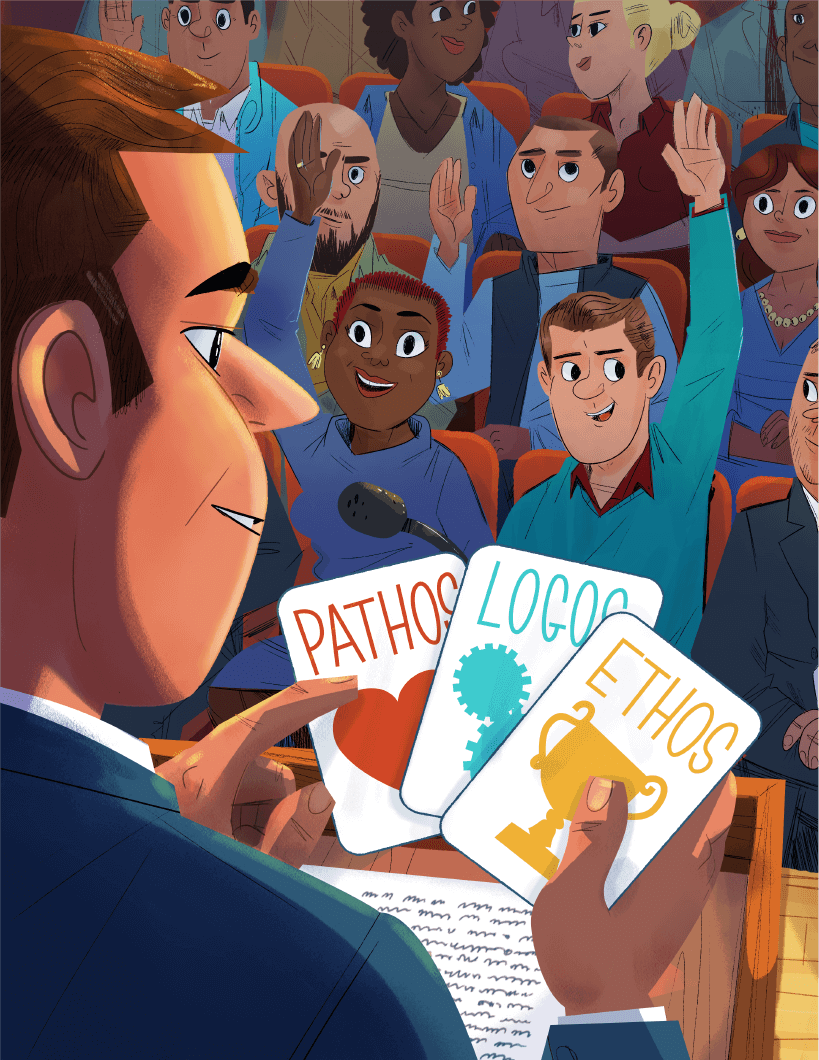 Persuasive speaking has always been among the most challenging of rhetorical exercises. It’s downright difficult to convince an audience to believe something or to take a particular action.

Why else do you think speakers were getting tips on this task as far back as the fourth century B.C.? That’s when Aristotle himself wrote Rhetoric, a treatise that outlines the foundational tenets of persuasive speech. The famed Greek philosopher focused on three ways an orator can appeal to an audience: ethos, pathos and logos. In short, ethos emphasizes the speaker’s credibility, pathos appeals to emotion and logos refers to reasoning—specifically, the structure and content of an argument.

The ancient ideas have stood the test of time. As Toastmasters teaches, you have to know your audience, and Aristotle’s ideas reflect that principle. Jeanine Turner, associate professor of communication, culture and technology at Georgetown University in Washington, D.C., says Aristotle taught the importance of adapting one’s messages to different groups. For Aristotle, “it was not about creating the slickest thing, but targeting your audience specifically and the ethos, pathos or logos that resonates with them,” she says. “It’s always about the audience.”

You need to assess your audience’s specific needs and tailor your speech to meet those needs. “The mistake of a novice persuader is saying what you want to say rather than what the audience needs to hear,” says Clay Warren, another Washington, D.C. university professor.

Once you know your audience, decide how to best incorporate and prioritize the three modes of persuasion to appeal to particular listeners. The “Persuasive Speaking” project in Pathways, Toastmasters’ new education program, offers valuable tips. (The project is in Level 3 of the Presentation Mastery path in Pathways.)

Talk to Your Audience

When you give a persuasive speech, it’s important to prevent a disconnect between what you say and what the audience needs to hear. One way to do that is to research and ask questions ahead of time. If possible, talk to audience members beforehand in conversational settings. Too often, “speakers come with a sales pitch,” says Kim Fredrich, a U.S. consultant originally from Canada who conducts sales training for non-salespeople.

She recommends interacting with audience members by “taking the temperature of the room. Ask for names and why they are there.” Observing nonverbal cues, gauging opinions with a raise of hands or electronic polling devices, and asking for feedback, are other ways to glean useful information.

Information from listeners may change the speaker’s goal. “The best questions [to ask audience members] are ones you are curious about because you are truly open to changing your narrative based on what they say,” says professor Turner. Too often, she notes, speakers aren’t truly listening, but rather, asking questions to “trap listeners into agreeing with us.”

Turner says it’s also important to remember that audiences are not homogenous. Even when audience members share demographic characteristics or a cultural background, their opinions and preferences can vary widely and may be influenced by geographic region, age, learning style and many other factors.

If you want to give a powerful persuasive speech, she says, don’t make broad assumptions about who you are talking to. Listen and learn. Audience-centered communication is about truly understanding audience members.

Warren, who has taught university courses in persuasion for more than 30 years—currently at George Washington University—says emotion has to support the rational or it will be hard to persuade anyone of anything. He isn’t advocating that persuasive speakers “kick out logos”; instead, he wants speakers to understand how logic fits into the overall persuasive picture.

“The mistake of a novice persuader is saying what you want to say rather than what the audience needs to hear.”

Persuasive speakers who rely heavily on logos have a limited ability to foster long-term persuasive change, says Warren. “Facts go through your brain like water through a sieve. But a story creates an emotional connection. If you get the emotion, you will remember. It is harder to attach an emotion to a number.”

“Heartfelt speeches should be well organized, crafted and rehearsed, just like analytical ones.”

As an example, he points out that many people can’t remember the date on which they got married, yet they can recount specific details when telling a story about their wedding day.

David Henderson won the 2010 Toastmasters World Championship of Public Speaking with an emotional speech about coping with loss. At the heart of the presentation was his story about losing a cherished childhood friend. For him, pathos is the most important part of persuasive speech, and storytelling is the key to pathos. Stories, he says, resonate with the deeply held values that motivate our thoughts and actions.

“To persuade people, you need to find something they already identify with and tap into it. The best way to do that in a non-confrontational way is by telling a story,” says Henderson, who also uses his persuasive-speaking skills in the courtroom: He is a civil rights attorney in Dallas, Texas.

Henderson is quick to add that logos and pathos are not mutually exclusive in communication. “Heartfelt speeches should be well organized, crafted and rehearsed, just like analytical ones.”

A final tip: To be convincing, you also need to be flexible, whether you’re delivering a persuasive speech or proposing a new work project, says renowned communication coach Nick Morgan.

“You can’t control everything in the moment. You need to have rehearsed so well that you can adjust on the fly if necessary,” he wrote in a post about persuasive speaking on his blog, Public Words. “It’s important as part of your persuasive arsenal that you always appear under control, poised and ready for anything.”

Toastmasters Tips for a Persuasive Speech


Christine Clapp, DTM is the author of Presenting at Work: A Guide to Public Speaking in Professional Contexts and a presentation skills consultant who helps professionals elevate their presence and expand their influence. Reach her on Twitter @SpokenAuthority.

5 Words to Make You More Persuasive 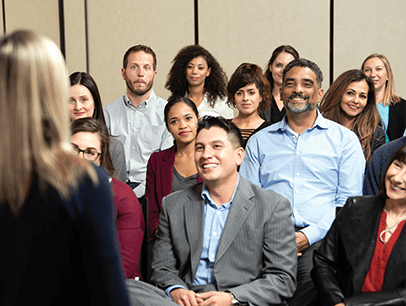 Who Are You Targeting?

Focus on your audience above all else.

One of the most common missteps in persuasive speaking is using logical fallacies. Simply put, these are arguments lacking in sound logic. Plenty of arguments that are fallacious or otherwise flawed are in fact widely accepted, say debate experts Kate Shuster and John Meany in their book On That Point: An Introduction to Parliamentary Debate. For example, the fallacy known as slippery slope, described below, appears repeatedly in public policy speeches.

Here are a few common logical fallacies to avoid in your next speech—or to be aware of when someone tries to persuade you of something.

Dave Zielinski, is a freelance writer in Minneapolis, Minnesota, and a frequent contributor to the Toastmaster magazine.

Toastmasters Tips for a Persuasive Speech 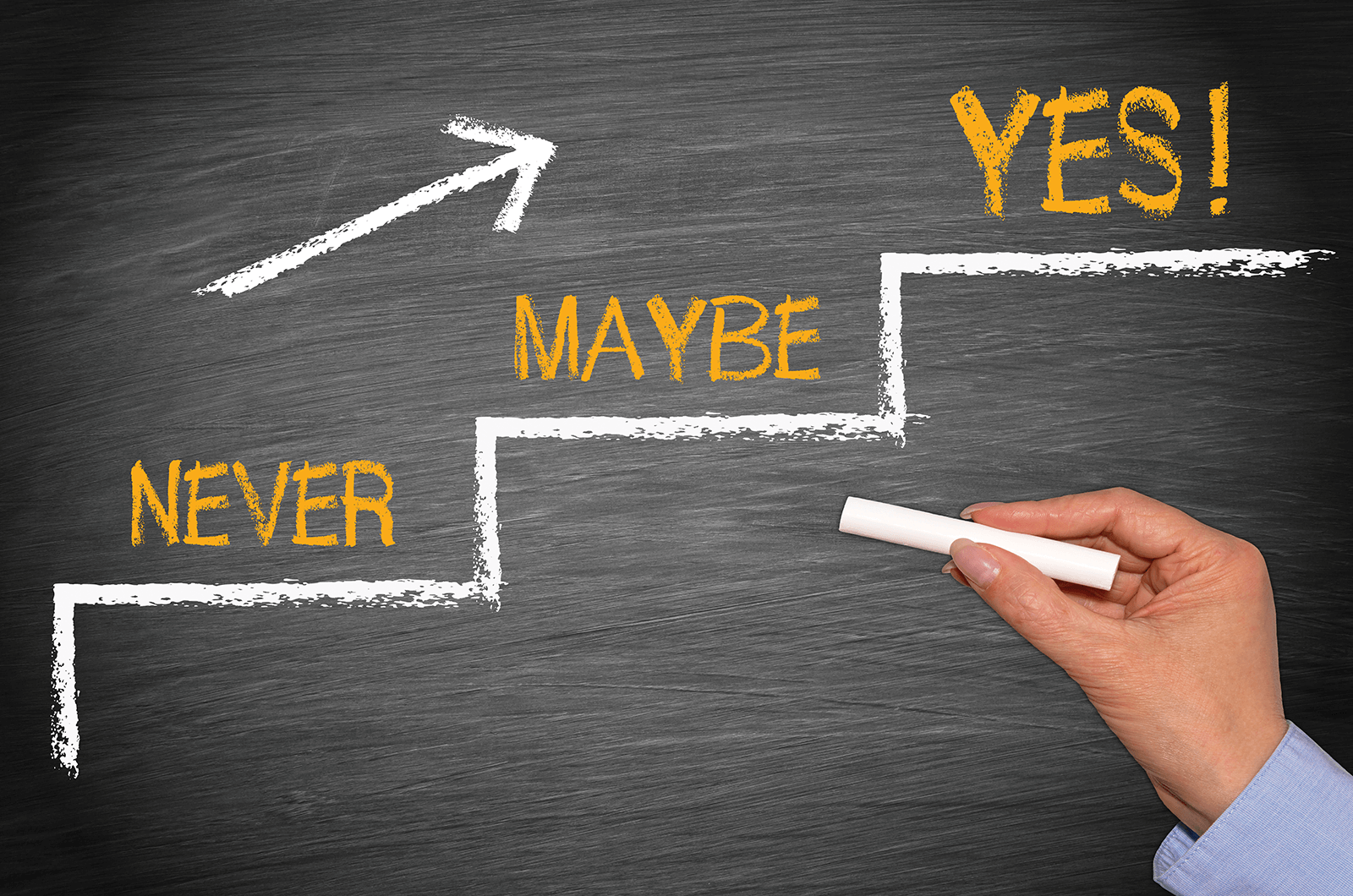 In a persuasive speech, your aim is to influence the thinking or behavior of listeners. You can do this in several ways.

Inspire: You want to inspire excitement in your audience about your topic or reinforce their existing ideas and beliefs.

Convince: You want to change audience members’ opinions or persuade them to develop the same opinion you have.

Call to action: You want listeners to take some type of action after hearing your speech, such as buy a product, try an activity or volunteer with an organization.

One key to making a powerful argument is knowing your topic well. Keep these suggestions in mind:

Language is important too. Include strong, descriptive phrasing whenever possible. The words you use have an impact on your audience.