Bobby Blackmon, DTM, has overcome steep obstacles to accomplish one goal after another. Bobby Blackmon, DTM, reads in braille to children at the My Children Childcare and Preschool in Tallahassee, Florida. Photo: Andrew Miller

When Walter “Bobby” Blackmon, DTM, was 5 years old, he dreamed of playing basketball and football, even competing in the Olympics. But those dreams ended one day when he was at a babysitter’s house and ran outside to find out why the chickens were making a terrible racket. Suddenly, everything turned hazy, then dark.

An emergency trip to the ophthalmologist revealed that Bobby had severe glaucoma in one eye and cataracts in both. He would never see again.

More than 40 years later, Blackmon is a Toastmasters star, recognized in North Central Florida as one of the area’s most charismatic and sought-after speakers. He belongs to three clubs, including We Can Speak-Podemos Hablar Toastmasters, where he is President. He is a coach, a sponsor, and a mentor. He has received 61 Toastmasters education awards, including Distinguished Toastmaster.

In 2017 he placed third in a Toastmasters International Speech Contest semifinal at the International Convention in Vancouver, British Columbia, Canada. The title of his speech was “The Day the Chickens Disappeared.”

Blackmon deals with his blindness constantly. “I have to believe in myself even when the odds seem incredible. Making things happen is what makes me flourish,” he says. “I keep trying and trying and know I’ll get there someday.”

Click play to hear an exclusive podcast interview with Bobby Blackmon, DTM, and the hosts of The Toastmasters Podcast.

Blackmon attended elementary school in Tallahassee, Florida, where he became fluent in braille, sang, played the trumpet, and wrote poetry. When he attended the Florida School for the Deaf and Blind, he discovered sports that he could do: the shot put, track, and wrestling. After high school, he attended Florida State University and studied English and creative writing.

Later, he took up the weightlifting sport called powerlifting, and in 2006 set a world record at an International Blind Sports Federation competition in the Czech Republic, lifting 427 pounds.

Blackmon credits “mind vision” for changing his dreams into reality. He visualizes where he wants to be, then figures out how to get there. Mind vision, he says, is behind his ability to accomplish work goals, navigate a room, even to play bumper pool, a billiards game in which he often beats sighted opponents.

In 2005 Blackmon was hired as a receptionist for the Division of Blind Services at the Florida Department of Education (DOE). He greeted visitors, transferred telephone calls, and answered questions. His coworkers noticed how warm and personable he was. One day a friend told Blackmon he should sign up for training in mediation, which involves helping two parties resolve a dispute.

He was the only blind person in a class filled with lawyers, judges, and other professionals. Some had been in mediation for years and were getting recertified. Although he felt intimidated at first, Blackmon did amazingly well, finishing third out of 20 in the class. When he returned to the DOE, he joined the conflict resolution team, where he helped interpret policy and resolve disputes for the visually impaired.

A work buddy suggested that Blackmon attend spoken word events in Tallahassee: weekly readings by writers and poets. He hesitated at first, but once there, Blackmon was entranced by the stories. He returned a week later with one of his poems. Although Blackmon says he “shook and shuddered all the way through,” the group’s director was impressed and asked him to return.

That night he decided to become a motivational speaker. “Reaching out to others—weaving a story—was super important to me,” he says. “And I always ended on a positive note, so everyone would know there was a reason for hope.”

“I was really blown away by their speeches,” he recalls. “Within 15 minutes, I was ready to join. This was a learning home for me, a home where I could learn and grow and become the speaker I wanted to be.”

Blackmon loved Toastmasters. His growing skills boosted his career at the DOE and within the year, he was leading the conflict resolution team. He realized that evaluating a speech was like resolving a dispute. “You have to listen carefully and identify the most important points.”

In 2017 Blackmon left the DOE to pursue motivational speaking, music, and writing full time. His colleagues hated to see him go. “He was always balanced and fair,” says former team member Michelle Levy. “His shoes were hard to fill.”

Modern computers and iPhones have a host of special applications to assist the visually impaired. In 2009 Apple introduced VoiceOver, which translates text to audible speech for iPhones, iPads, and iPod Touches. In addition, there are third-party apps that identify colors, describe objects, estimate a person’s age, and identify the value of paper money. Using the iPhone camera, Blackmon can call a special helpline and get advice on which tie best matches his shirt.

On his personal computer, he uses JAWS (Jobs Access With Speech), which operates much like VoiceOver on his iPhone. With JAWS, Blackmon sends and receives emails and uses Zoom.

He is so skilled with his technology that often people don’t realize he’s blind.

Blackmon’s Toastmasters mentees sing his praises. Lisa Curry is a new member of We Can Speak-Podemos Hablar Toastmasters in Tallahassee, who has known Blackmon since they were students at the Florida School for the Deaf and Blind. He helps her learn how to use nonverbal cues. She says he is “truly a wonderful person.” He also advises Derek Bell, another member of the We Can Speak-Podemos Hablar club, on how to be successful as a club and District officer.

Blackmon remains passionate about music and poetry. Much of his work is aimed at victims of violence. Blackmon had firsthand experience with domestic abuse. His stepfather, he says, was an alcoholic and often violent.

Blackmon also volunteers at prison Gavel Clubs. (Gavel Clubs provide the Toastmasters experience for those not eligible for regular membership). This past January he presented officer training for the Out of the Blue Gavel Club at the Jefferson Correctional Institution in Monticello, Florida. Afterward, the men said they appreciated how he treated them with humility and respect. In response, Blackmon noted, “Being blind is like being in prison—every day you must deal with it.”

Chuck Rabaut, DTM, is a fellow Florida Toastmaster who has been volunteering at prison Gavel Clubs for many years. Once he and Blackmon visited a Gavel Club at the Franklin Correctional Institution in Carrabelle, Florida. After the meeting was over and the pair were in Chuck’s car on the highway, Bobby asked his friend, “Are we going back to Tallahassee?”

When Chuck said yes, Bobby replied, “Then we are going the wrong way.”

Bobby pays attention. And he knows the right way.

Andrew Miller lives in Tallahassee, Florida, and belongs to PMI Tallahassee Toastmasters. He is a retired biologist who now devotes his time to creative writing, volunteering, and environmental consulting. His website is www.andrewcmiller.com. 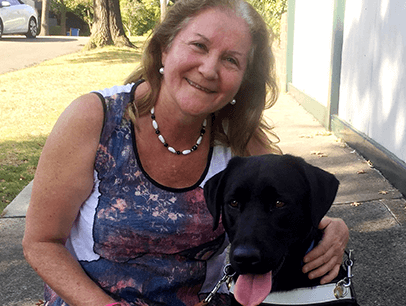 How my service dog and I became competent communicators.