Earlier this year, Chuck Rabaut, DTM, and I drove from Tallahassee, Florida, 30 miles to attend a meeting of the Driven by Destiny Toastmasters. This isn’t your typical Toastmasters club. These members reside in Gadsden Correctional Facility, a women’s prison.

Chuck isn’t your typical Toastmaster, either. He’s 88 years old, has been a member since 1974, and has made it his mission to help imprisoned men and women improve their lives through Toastmasters.

I heard about Chuck in 2019 while searching for local volunteer opportunities. During our first meeting, I learned that he oversaw 25 Gavel Clubs in prisons throughout northwest Florida. Gavel Clubs are groups who may be ineligible for regular membership in Toastmasters but through this type of club can still participate in the Toastmasters experience. Participants run the clubs themselves, and those who oversee the groups are called counselors. In some weeks, Chuck volunteered 80 hours and drove 1,000 miles. Occasionally he visited five clubs in a single day. When I asked what motivated him, his answer was simple:

“It has to be done,” he said. “Inmates need to be able to think on their feet, speak well, and work cooperatively. This will help them get out of prison and stay out.”

I was impressed and decided to volunteer alongside Chuck. A few months later, I joined the PMI Tallahassee Toastmasters Club. After Chuck and I arrived at Gadsden Correctional Facility for our visit earlier this year, we made our way to a small, well-lit classroom with white, cinder block walls and a gray linoleum floor. At the front of the room was a long whiteboard, covered with neatly printed math problems and rows of vocabulary words. Chuck and I sat at long tables with eight inmates, dressed in identical blue jumpsuits.

Chuck is 88 years old, has been a member since 1974, and has made it his mission to help imprisoned men and women improve their lives through Toastmasters.

Driven by Destiny Toastmasters remained open amid COVID-19 restrictions by separating the club into four groups that met separately. Everyone wore a mask and maintained social distancing. A club member named Kylee was the afternoon’s Table Topicsmaster. She was about one-third Chuck’s age. The Table Topics® theme was: “Book Titles”—members had to speak about various titles selected by Kylee. Responses were snappy and entertaining. The last title was: The Only Woman in the Room. Apparently, there was one person in particular Kylee wanted to respond to this one. She allowed the suspense to build, then pointed to Chuck.

Chuck hadn’t read the book, but when he heard “woman” he was reminded of an old country and western hit song. He jumped to his feet and began to dance and sing:

“Well, why don’t you love me like you used to do

How come you treat me like a worn-out shoe …”

When the applause subsided, Kylee said, “Chuck, I want to be just like you when I grow up.”

Chuck came from a broken home and spent most of his early life in orphanages. He quit high school then joined the Air Force where he received his diploma. Once he returned to civilian life, he earned a bachelor’s degree and then a master’s degree in management. In 1973 he was hired by the state of Florida to train prison staff on methods to deal with problem employees. Chuck Rabaut, a Toastmaster since 1974, addresses a group of inmates in a Florida correctional facility, wearing a mask due to COVID restrictions. Photo by Andrew Miller

Chuck joined Toastmasters to improve his speaking skills. He quickly realized that inmates would also benefit from the Toastmasters experience, and to that end he wanted to set up a prison club, but he never had the chance. In 1999 he retired but continued to work for the state of Florida part time. In 2011, while he worked part time at the Wakulla Correctional Institution in Florida, a group of inmates asked Chuck to set up a Gavel Club for them. This was the chance he had been waiting for and on September 4, 2012, the first meeting of the Northern Lights Gavel Club was held. “Once this idea caught fire, chaplains were beseeching me to set up clubs at their prisons,” said Chuck. Within several years he was overseeing more than a dozen clubs and the numbers kept growing.


Some of Their Stories

Toastmasters speeches given by inmates can be more poignant and evocative than those delivered in clubs on the outside. As a volunteer, I have listened to stories of poverty and domestic abuse, drugs, alcohol, child abuse, and almost always, hopes and dreams for women and their children.

What we heard from the women in Driven by Destiny was no exception.

The first prepared speech was “That’s So Taboo,” by a club member named Cynthia. She pointed out that even during these divisive times, we shouldn’t hesitate to engage with family and friends on topics such as sex, religion, and politics. Everyone should stay informed on important issues.

The next speech was “Scars,” delivered by Kylee, who had earlier served as Topicsmaster. She reminded the group that scars can be physical or emotional and always tell a story—usually of pain, stupidity, or lessons learned. Kylee said people shouldn’t be afraid to show their scars to others. “Your courage,” she said, “will give others permission to show theirs.”

Chuck provided names of previous members of prison clubs so I could learn about their experiences in Toastmasters. I contacted Jennifer Daniels, who is now the sole owner of a small trucking company in south Florida. She said that skills learned during her two-year membership in Driven by Destiny helped her to set up and maintain her company.

Anna (not her real name) was born in a Middle Eastern country and came to America as an adult. When she was incarcerated soon after arriving in the United States, she had to quickly learn a new culture and adjust to life behind bars. In one of her early speeches, she described this adjustment. She was a member of Driven by Destiny for three years and in the club she learned to express her opinions in front of others, something she hadn’t done in her native country. “Toastmasters gave me my voice,” she said. “And Chuck was my mentor.”

When Jerod Powers went to prison, he had no education or job skills. All he knew was “guns and drugs.” He had been in crime since age 14. In his early 20s, he was incarcerated in the Central Florida Reception Center in Orlando. He credits the End of Sentence Gavel Club, where he was a member for two years, with teaching him team building and networking. He is now a Distinguished Toastmaster and runs Faith for Freedom Ministries in Jacksonville.

Chuck will soon reduce his involvement with prison clubs. He has implemented a succession plan that will enable his work to continue with other volunteers.

I wanted to know how he has been able to run such a complex program. “It’s more than just me,” he replied. He gets help from about 10 volunteers. Slightly more than half are Toastmasters. Chuck raises 3,000 annually to cover membership fees and educational materials.

As we parted company after our meeting at the prison, he had one final comment. “You should realize that for inmates there’s lots more to Toastmasters than speeches. For some, this is the first time they have been complimented or heard kind words.”

Andrew Miller lives in Tallahassee, Florida, and belongs to PMI Tallahassee Toastmasters. He is a retired biologist who now devotes his time to creative writing, volunteering, and environmental consulting. His website is www.andrewcmiller.com.

Members of a prison club gain inspiration, honest talk and the skills to educate at-risk youth. 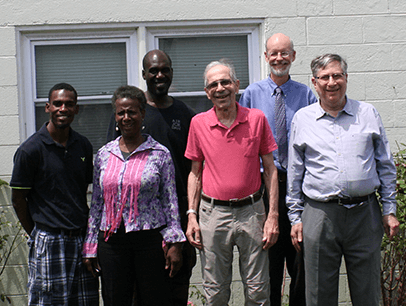