Know the rules and judging criteria before you compete.

As we get closer to the end of 2016, it is time to start thinking about the next International Speech Contest season, which for most districts begins in early 2017. Before crafting a speech for your club contest, you may find it helpful to separate the facts from the myths when it comes to the contest rules and judging criteria.

You have to be a seasoned Toastmaster to compete.

Participation in the International Speech Contest is open to any member of a Toastmasters club who has completed at least six speeches from the Competent Communication manual before the club contest, and who is “a paid member of the club, area, division and district in which he or she is competing.” The club must also be in good standing. Novice Toastmasters are welcome and encouraged to participate. Case in point: Ryan Avery, DTM, won the World Championship of Public Speaking in 2012, just a year and a half after he joined Toastmasters!

“Competing is for everybody,” says David Henderson, CC, the 2010 World Champion of Public Speaking. “Competing is the best way to rapidly improve your communication skills regardless of your experience level.”

Beyond the requirement that a member give at least six speeches and be in good standing, a few situations preclude a Toastmaster from competing in the International Speech Contest, according to the Speaker’s Certification of Eligibility and Originality form, which is available as a free download. You can’t compete in the contest if you are: 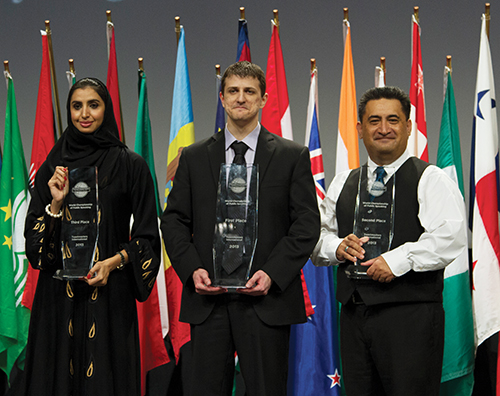 According to the current bylaws of Toastmasters International, “No person shall be excluded from membership in a club because of age (except those persons under 18 years of age), race, color, creed, gender, national or ethnic origin, sexual orientation, or physical or mental disability, so long as the individual, through his or her own effort, is able to participate in the program.” This inclusivity also extends to the participation and judging of contestants in the International Speech Contest.

But this hasn’t always been the case. Dilip Abayasekara, DTM, a past president of Toastmasters International as well as a two-time finalist at the World Championship of Public Speaking, notes one reason for the few women champs: Women were not allowed to join Toastmasters and compete in the International Speech Contest until 1973. “Just four years after [club membership] was opened to women, Evelyn Jane Burgay won the World Championship,” he points out. “Other women who won the World Championship were Marie C. Pyne, Arabella Bengson, and just eight years ago, LaShunda Rundles. They proved that the winner’s circle is accessible to women.”

This year, five of the 10 finalists in the World Championship of Public Speaking were women, and Josephine Lee finished in third place.

Abayasekara, an Accredited Speaker who placed second in the 1992 World Championship of Public Speaking, knows firsthand that speakers with accents can succeed in competition. A non-native English speaker, he recalls, “In the early years of my competition experience, I noticed that as I got to the region level, where there are much larger audiences than in district contests, I did not place in the top three.” 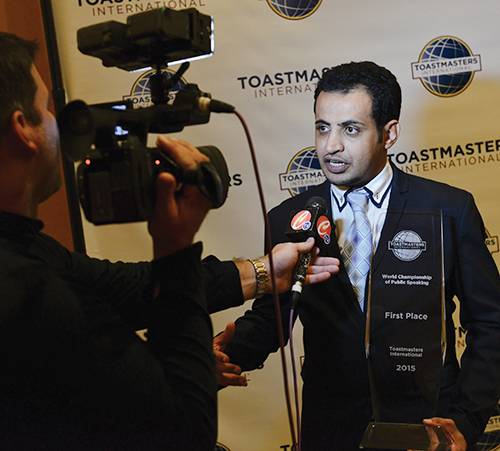 So he went to a professional speech coach. “My coach told me that she didn’t want me to lose my accent because my accent made people listen to me,” recounts Abayasekara. “What she did for me was to teach me to speak clearly so that people could understand every word I said.”  A recent example of a speaker with an accent who thrived is Mohammed Abdullah Qahtani from Saudi Arabia. A non-native English speaker, he captured the 2015 World Championship of Public Speaking. And this year’s World Champion of Public Speaking, Darren Tay, is a Singaporean who grew up speaking English and Mandarin.

Speech content and delivery are weighted equally by judges.

In fact, judging criteria are broken down as follows on the International Speech Contest Judge’s Guide and Ballot: content 50 percent, delivery 30 percent and language 20 percent.

Content accounts for 50 of 100 points possible on the judging ballot. Of those 50 points, 20 are dedicated to speech development (structure, organization and support material), 15 to speech effectiveness (interest, reception and achievement of purpose) and 15 to speech value (ideas, originality and logic).

Delivery accounts for 30 of 100 points possible. Of those 30 points, 10 each go to physical delivery (appearance, body language and use of speaking area), use of voice (flexibility and volume), and manner (directness, assurance and enthusiasm).

Language accounts for 20 of 100 points possible. Of those 20 points, 10 are for appropriateness (to speech purpose and audience) and the other 10 are for correctness (grammar, pronunciation and word selection).

The full ballot, including a further explanation of the judging criteria, is available in the Resource Library.

Some contestants make the mistake of treating the International Speech Contest as a theatrical performance. “During one spell of World Championships, it seemed that contestants often put on extremely energetic ‘performances,’ racing back and forth on the stage, using extreme vocal variety or overdoing body language,” says Abayasekara, who has judged speech contests at every level of competition. “Winners since then have proven that we still have a ‘speech’ contest; use of the stage, vocal variety, body movement and body language are important, but an effective speech continues to be an enlarged conversation with the audience, one person at a time.” You need not be an actor to succeed in the International Speech Contest.

Your speech has to be about the three D’s.

Some speakers assume they are at a disadvantage in the International Speech Contest if they haven’t experienced what Bonnie Maidak, DTM, calls “the three D’s”: death, disease and divorce. But they’re not. “I think the winners have been getting away from the three-D concept because they realize that there’s a certain amount of [audience] fatigue,” says the two-time chief judge for District 36. Maidak points to 2013 World Champion Presiyan Vasilev, who earned the title with a speech that recounted the near-universal life experience of changing a flat tire.

“By the time you get to the semifinals—maybe even district—contestants can speak equally well but they cannot write equally well. You cannot practice your way out of a badly written speech.”

The International Speech Contest Judge’s Guide and Ballot says about speech value, “The speaker has a responsibility to say something meaningful and original to the audience. The listeners should feel the speaker has made a contribution to their thinking. The ideas should be important ones, although this does not preclude a humorous presentation of them.” There is no requirement that speeches be about certain types of topics (such as the three D’s) or have a particular speech purpose (to inspire or to entertain, for example).

A speech that wins at one level will be competitive at the next.

Competition in the International Speech Contest usually starts at the club level in the beginning of each calendar year. Club winners advance to the area competition, then to the division contest and then to the district contest. Winners at the district level advance to the International Speech Contest Semifinals. Ten finalists advance from the semifinals to compete in the World Championship of Public Speaking. The semifinals and finals take place every August at the International Convention—about six months after the club contests.

“In the early stages of the contest, great oratory can overcome bad writing, but not in the latter stages,” says Henderson, the 2010 champ, who is a trial lawyer in Dallas with the law firm Simon Greenstone Panatier Bartlett, PC. “By the time you get to the semifinals—maybe even district—contestants can speak equally well but they cannot write equally well. You cannot practice your way out of a badly written speech.”

To advance to the highest level of competition over the course of six months, speakers must continue refining the content of their speech as well as their delivery skills. Many practice their speeches dozens, if not hundreds, of times, and they enlist the help of mentors as well as speech coaches between high levels of competition.

You can get disqualified by going outside the speaking area.

It is not true that speakers can be disqualified for moving beyond the speaking area designated by the contest chair. They may, however, lose points from judges under the category of physical delivery, explained on the judge’s guide as making “effective use of and stay[ing] within the designated speaking area.” 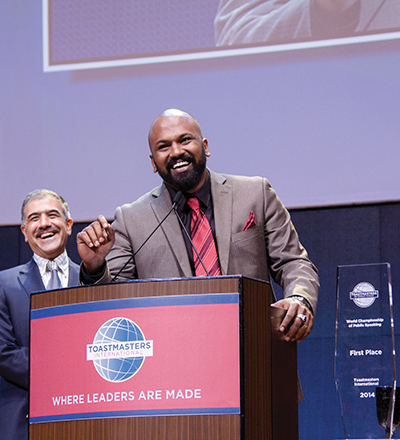 Speakers, however, are disqualified if they do not maintain eligibility and good standing at all levels of the International Speech Contest or keep their speech within time limits. (Disqualification happens when speeches are shorter than four minutes and 30 seconds or longer than seven minutes and 30 seconds.) Also, according to the Speech Contest Rulebook, contestants may be disqualified if more than 25 percent of their speech is “devoted to quoting, paraphrasing or referencing another person’s content” or if quoted, paraphrased or referenced material is not properly attributed. Only other contestants and voting judges may protest the eligibility of a contestant and/or the originality of a speech.

Judges are a great source for feedback on your contest speech.

Though Toastmasters is known for constructive feedback given by evaluators in club meetings, the role of contest judges is different. The Speech Contest Judges Training manual describes the difference between judges and evaluators best:

“A judge’s purpose is to select the speaker who has given the best speech on that day. Judges do not evaluate. Evaluators appraise a speech, measuring the speaker’s presentation against his or her purpose and then advise the speaker on how to improve the speech.

Some speakers assume they are at a ­disadvantage in the International Speech Contest if they haven’t experienced what Bonnie Maidak, DTM, calls “the three D’s”: death, disease and divorce.

“Judges’ decisions are confidential and judges are not to explain their decision to contestants, or tell contestants how they could improve. To do so distracts judges from their purpose, and can cause them to judge improperly.”

So don’t be alarmed or disheartened when contest judges decline to discuss your presentation or provide insights on how to improve—this includes all three types of judges: the chief judge (who briefs and oversees all judges at a contest), voting judges (who use a ballot to identify their first, second and third place winner among contestants) and the tie-breaking judge (whose ballot ranks all contestants numerically and is used only when there is a tie after tallying results from the voting judges). Instead, use evaluators in your club and in other clubs as well as mentors and coaches to get feedback on your contest speech.

Now that you’ve untangled the facts from the myths about the International Speech Contest, it’s time to start crafting a speech for your upcoming club contest. By competing, you will certainly hone your speaking skills. And next August, you may just join the pantheon of public speakers, like 2016 winner Darren Tay and others before him, who have earned the title of Toastmasters World Champion of Public Speaking.

Have questions? Send them to World Headquarters.

The International Speech Contest Judge’s Guide and Ballot includes a further explanation of the judging criteria.

Find the Judge’s Certification of Eligibility and Code of Ethics here.

The Speaker’s Certification Of Eligibility And Originality form shows who is ineligible to compete in a Toastmasters contest.

To learn about possible scenarios that judges face, see “The Art of Judging” section in the Speech Contest Judges Training Presenter’s Guide.

Christine Clapp, DTM is the author of Presenting at Work: A Guide to Public Speaking in Professional Contexts and a presentation skills consultant who helps professionals elevate their presence and expand their influence. Reach her on Twitter @SpokenAuthority.