Skip to main content
×
The Online Store is currently unavailable and should return by June 6, 2022. Somerville Toastmasters of Somerville, Massachusetts, held “The Toasties,” an awards show-themed meeting. Members were encouraged to dress up, and President Alex Thompson played the role of the red-carpet fashionista, interviewing members about what they were wearing to that week’s Zoom call. During Table Topics®, members practiced receiving fictitious awards (such as World’s Best Procrastinator) with tact and humility. David Pasternak came up with the meeting idea, served as Toastmaster of the Day, and created a video prelude and humorous interludes throughout the meeting. While no trophies were given, each speaker received an even more valuable gift—an evaluation! 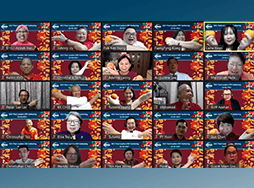