How To Quit Talking Quickly Radio commercials sometimes end with legal language that must be included but is said purposefully quickly so that the listener can’t fully process the information, and that’s the point. The producers of that commercial know anything said quickly is less likely to be processed or retained.

The same is true when you are sharing important information with an audience. The more quickly you speak, the more you diminish the resonance and impact of your point.


Why Speaking Quickly Hurts Your Speech

To understand the connection between speaker pace and audience processing, consider the roles of speaker and audience. As the speaker, you’re making a point you’ve understood and practiced for some time. Your audience, on the other hand, is hearing it for the first time. As such, they need to hear it, digest it, process it, determine its relevance, think about its application, and consider writing it down or tweeting it. Meanwhile, you’re already six sentences down the road.

Speaking quickly also blunts the clarity of your words and increases the risk of mumbling, making it even harder to be fully understood.

Unlike the voice in commercials, public speakers don’t typically talk quickly on purpose, so here are some reasons why they might:

Whatever the cause for quick-speak, it always decreases clarity and impact. Remember: Your audience needs twice as long to receive your point as you need to make it. And if they don’t successfully receive it, there’s no point making it in the first place.


I’ve never met a public speaking client or student who was able to slow down after simply being advised, “Hey, slow down.” That’s like telling someone not to sneeze, blink, or scratch an itch. So let’s talk about six tactics that do work:

If you speak with a loud voice—something I always advise to project competence, confidence, and authority—you simply won’t have enough breath to simultaneously talk quickly. Try saying something both loudly and quickly. Very difficult, right? Since volume in and of itself is a public speaking asset, use it also to decrease your speaking velocity.

Articulation is another effective speed-reduction tactic because it creates oratorical “speed bumps” that force you to slow down, while boosting your vocal clarity. When you use your mouth, not just your tongue, to increase enunciation, you’ll also come across as more committed—and feel more energized—because you’re making points with greater physical effort.

Pauses can be a speaker’s best friend because they give you time to choose your words with precision, draw attention to critical points, and bring your speaking speedometer back down to zero. Sure, you can rev up the pace again, but at least you have to build up to that level after every pause, which is much better than maintaining that speed constantly. When you pause, remember to take a quiet breath. That breath will further slow and calm you down.

If you fear how your pauses will be perceived, don’t sweat it. Audiences generally don’t remember short pauses—which are moments of nothing, after all—so use them strategically. Just don’t fill those pauses with crutch words like “ah” or “um,” which draw attention to them.

Find places in your presentation to pose questions to your audience, even if you’re only asking them to raise their hands. This technique brings your speed down to zero because you naturally won’t ask a question quickly, and you need to wait a few ­seconds for the audience to respond.


5 Put Breaks in Your Notes

Good speaking notes are like a cheat sheet, reminding you of the points you need to make. Notes can remind you not only what to say, but also what to do. Write the word “PAUSE” in your notes where you need time to allow a point to sink in. Also, break up your notes into concise bullets or phrases. This practice will condition your mind to think of your presentation as separate and distinct expressions—with built-in pauses between them—not as one big collection of words to sprint through.

Finally, if you find yourself running out of time as you’re speaking—which happens to the best of us—try to cut less important content, not speed up, because anything you rush will not be retained. As a general rule, your presentation should start with the most significant ideas and end with the least significant ideas, making emergency cuts easier as you progress.

In Toastmasters, we often learn the best techniques by watching others speak, so if you want to see great examples of a controlled and steady pace, look no further than three of my favorite Toastmasters International World Championship speeches from Dananjaya Hettiarachchi (2014), Manoj Vasudevan, DTM (2017), and Ramona J. Smith (2018).

As you watch these speeches—even just the first 30 seconds of each—pay close attention to their strategic use of patience, volume/energy, articulation/enunciation, and deliberate pausing. I believe those tactics were just as critical to Hettiarachchi, Vasudevan, and Smith’s success as their content and humor.

Reducing speaking speed is personally relevant to me because I’m admittedly a fast talker. Whether that’s due to nature or nurture (I do work in New York City), I know that I’m sabotaging my purpose as a presenter if I talk too quickly. These tactics—particularly ­volume, articulation, and pausing—keep my speed in check, and I hope they do the same for you.

Joel Schwartzberg is the senior director of strategic and executive communications for a U.S. national nonprofit, a presentation coach, and author of The Language of Leadership: How to Engage and Inspire Your Team and Get to the Point! Sharpen Your Message and Make Your Words Matter. Follow him on Twitter @TheJoelTruth.

Advice From the Pros

Need to Make an Impact? Get Loud

Turn up your volume for benefits far beyond simply being heard. 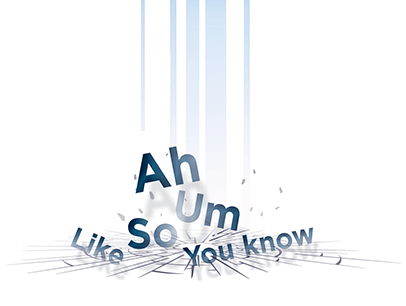 Learn to let go of the ‘ahs,’ the ‘ums’ and other filler words.

The rate at which you speak is closely associated with your personality. Consequently, the rate is difficult to change because it relates to how you think and behave—even how and where you live.

The most effective speaking rate is between 120 and 160 words per minute. You can easily keep within this optimum range by speaking rapidly enough to avoid being a boring drone, yet slowly enough to be understandable. By varying your speaking rate during a talk, you can also reflect changes in emotions and mood, as well as emphasize critical points.

A good speaking voice is an asset in every contact with others. It can help in gaining promotions, making sales, winning the respect of others, and improving your social opportunities, as well as in speaking effectively to audiences. Your voice is your greatest tool as a speaker. It’s the medium of your message.