If you can inspire people to laugh, you’ve found a way to draw them in, amuse them, and engage their interest in any speech … even on a dry topic.

“Realize that humor can lead to happiness, one of the best feelings on Earth to humans,” says Jessica Breitenfeld, President of the Spreeredner Toastmasters Club in Berlin, Germany, as well as a therapist. “If you can dive into humor, your speeches increase in power, relatability, and influence tenfold, because you’re harnessing the power of human connection.”

As Toastmasters we give all kinds of speeches to inform, persuade, inspire, and delight. Humor is an often forgotten ingredient that can improve every single speech. A sprinkling of levity at just the right moment can reach your listener’s heart and mind. Humor needs to be applied sparingly in some cases, and always with skill, but if you think you’re not the funny type, don’t give up just yet. Your Toastmasters club offers a great place to experiment with all forms of humor, from subtle wit to all-out tall tales.

Click play to hear an exclusive interview with Toastmaster and comedian Stephan Dyer and the hosts of The Toastmasters Podcast.

Humor can be applied in varying degrees. A joke can be subtle, making an audience smile, or it can be supercharged, producing raucous laughter. For anyone timid about using humor techniques, the good news is that plenty of the easy tactics listed below qualify for the “smile” range—you don’t have to be outrageous to add humor successfully. Andrew “Drew” Tarvin, a former computer science engineer for Procter Gamble, has built a successful career as a self-described “humor engineer.” Now a New York-based comedian, he speaks about blending work and humor before corporate audiences internationally. He encourages speakers to experiment with ways to make their audiences laugh and to be open to shifting tastes. “I think what people find funny is changing. Don’t let it be an excuse that stops you from improving as a speaker,” he says. “Learn how to adapt your message to meet your audience where they’re at.” Drew Tarvin presents his 2017 TEDxTAMU Talk on "The Skill of Humor."

In Tarvin’s viral 2017 TEDx Talk, “The Skill of Humor,” which has been viewed nearly 9 million times, he notes that all his material is “Rated M for Mom,” because he always wants his mother to be proud of his performances.

That kind of “general audience” rating is a useful guideline for business settings as well as Toastmasters speeches, Tarvin says. “Would you be comfortable with whatever you said or did showing up on the front page of your hometown newspaper (or blasted all over social media)? If not, then it’s probably not appropriate for the workplace.”


Humor can be a powerful tool in presentations ranging from a holiday toast to club meetings to business presentations. Veronica Dangerfield, a founding member of the Oakland Chamber Toastmasters in Oakland, California, uses humor in her job as a financial well-being educator for the Patelco Credit Union. When she makes a light joke during her introduction, she finds it provides an instant, relaxing connection with her audience. “With my last name, I always have a comic introduction,” she says. “I can usually mention the famous comedian Rodney Dangerfield, or with younger folks, I say that it’s a danger in their financial field if they don’t listen.” Humor offers a “virtual hug” for listeners and an invitation to be playful, she adds. As Dangerfield learned, humor is an effective tool in navigating workplace relationships. “My use of humor has made me successful in teaching people money skills. First, they are shocked to be laughing while learning about money,” she says. “Most people feel shame about money—but here is a comedian, telling them they did a fine job, so far.” Then, when she suggests they figure out how to do better, her students take action with renewed confidence. “Humor is a better motivator than shame,” Dangerfield notes. “When skillfully used,” she advises, “you can articulate the truth in a way that does not hurt anyone’s feelings.”


Four Ways To Be Funny

Rod A. Martin, Ph.D., a professor of psychology at the University of Western Ontario in London, Ontario, Canada, specializes in clinical psychology and has published his research on humor. In his 2007 book, The Psychology of Humor: An Integrative Approach, he classified humor into four fundamental categories, centered on a joke’s effect and its target. “Understanding the four styles helps you determine the type of humor you want to use,” says Tarvin, the New York engineer-turned-comic. These important distinctions offer a simple, practical approach to humor that puts speakers in better control of their jokes.

Tarvin, who has a large social media following, explains that many professional humorists pay attention to Martin’s four categories when crafting a joke. Of the four, making fun of yourself is one of the most successful approaches, he explains. If you want to be a transformational speaker, it’s better to focus on the positive methods. If you make jokes about yourself, people are more likely to listen.

Dangerfield, the financial health educator in California, encourages self-enhancing humor in her students for its uplifting effect. She also uses affiliative humor about everyone’s shared emotional experiences with finances. “Money is irrational. It’s based on emotions,” she says. “If you can see your behavior in a funny way that’s shared commonly, it’s not an internal judgment.”

For Tarvin, the New York comedian, using affiliative humor is key to becoming an effective corporate trainer, because it creates a positive environment where people feel part of a community. He cautions against using self-defeating or aggressive humor in the workplace. While it’s funny at open mic night (where anyone can try out comedy), you really don’t want to brand yourself as a loser or a bully around the office. For example, you could say, “My quarterly report worked out pretty well, especially considering that I wrote it at home. Even the crayon marks added so much.”

But contrast that with “My quarterly report from home was so bad that my kids’ crayon marks were the best part.” Placing blame (especially on children) can cross a line, making the joke sound inappropriate and possibly offensive.

Some people aren’t even trying to be funny and they win laughs, as Toastmasters Markus Seppälä, DTM, and Stephan Dyer, DTM, can attest. For many comedians, there is a moment of discovery. Seppälä, a founding member of the Basel International Speakers Toastmasters club in Basel, Switzerland, was building a speaking career several years ago. He worked at Johnson & Johnson as a specialist in executive compensation and employee share plans, speaking on topics related to compensation at conferences. But seven years ago, he realized at Toastmasters club meetings that he was also unintentionally funny. Club members laughed when he spoke while performing leadership roles, such as General Evaluator. Rather than shy away, he worked to develop his comedic skills. “I began going to comedy clubs. When one of them offered open mic shows, I gave it a go and never looked back.” Now Seppälä is a professional humorist and runs the largest comedy club in his city, Comedy Basel. (Learn more about him in this exclusive Q&A.) Dyer of Toronto, Ontario, Canada, also had no idea he was funny when he joined the Bay Street Breakfast Toastmasters Club in Toronto in 2012. “I just started speaking, and people would laugh regardless of the Toastmasters manual I was following,” he says. At the time, Dyer didn’t know enough about the science of humor to understand why people found him funny. “I was unknowingly using misdirection, comparisons, irony, exaggeration, and more,” he says.

A native of Costa Rica, Dyer is a former banking executive who gave a TEDxTalk about his journey to become a professional comedian and co-owner of Toronto’s Malpensando Comedy School, performing comedy in both Spanish and English.

Once you understand the four basic categories of humor, you’re ready to try some specific comedy techniques.

The rule of three is commonly called the comic triple when it results in laughter. The idea is simply that a joke can come in three parts—setup, anticipation, and punchline. It works because three is the smallest number the human brain needs to set up a pattern. For humor, the pattern is bent in a surprising way at the end. “Humans love novelty, and surprise creates delight,” notes Breitenfeld.

Here’s an example showing how a comic triple can work as a self-enhancing joke:

Another useful tool is visual humor, where something the audience sees, such as a funny costume, is part of the joke. That includes physical humor, which relies on humorous body language. Canadian comedian Dyer offers one caveat, “You have to be very clear in communicating the joke’s premise, or the crowd isn’t going to follow your physical humor.” Make sure the audience understands the joke’s setup before you perform the movements. Otherwise, it could be awkward when no one laughs while you’re showing off that unspoken punchline.

If you’re seeking a more subtle humor technique, try a pun—an amusing way to surprise with double meanings of words and phrases. For example, “He was fired from the calendar factory for taking a day off.” If you’re great with witty wordplay—wonderful! But be sure to adapt to your audience’s familiarity with your language.

One of the best ways to improve your humor skills, Tarvin suggests, is to watch speakers giving popular TED Talks, because humor is always a key component. “Take note of how they’re using humor to engage the audience or make a point.” Before long, you’ll be practicing these techniques in your club. Enjoy each smile and laugh, as you connect with your audience in a new way.


Beth Black is a freelance writer and editor who lives in Orange County, California. Learn more about her at PracticalPoet.com. 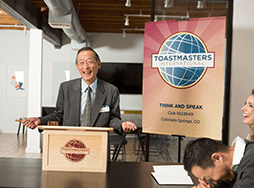 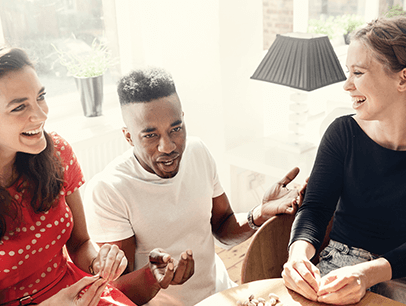 The Engaging Humor path is a popular one in the Pathways learning experience. Its projects help Toastmasters build skills as humorous and engaging public speakers, offering strategies on writing funny speeches, using effective timing and pacing, crafting strong openings, and even figuring out how to cope when your jokes bomb. (Hint: Don’t be mad at the audience.)

Learn to understand your own sense of humor and how it translates to entertaining audiences, especially by practicing in challenging situations or in impromptu speeches. The projects include interactive activities and videos, and culminate in an extended humorous speech that allows you to apply newfound comedic talents.

While experimenting with humor, remember these important tips: