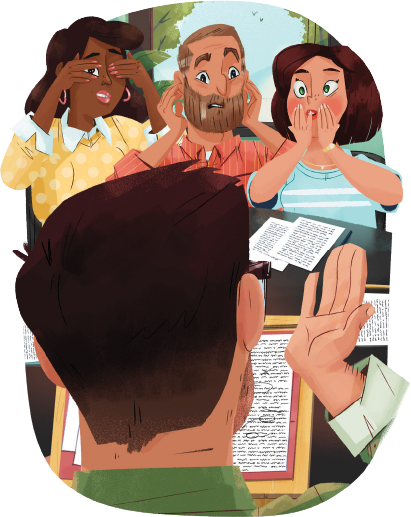 What do you do when a meeting goes wrong? Our club found itself in a troubling situation when our Table Topicsmaster asked us to speak on topics that were, in his own words, “sexually edgy.” Members were shocked and didn’t know how to react. Our guest walked out—and reported us to Toastmasters International World Headquarters.

With more than 75 years of combined Toastmasters experience in our club, none of us had ever encountered a situation like it. We took what we thought were reasonable steps. Individual members reached out and apologized to the guest, and we asked the Table Topicsmaster to apologize too. He didn’t get it. Instead of a quick “I’m sorry,” he sent emails that rationalized and defended what he considered a healthy conversation.

Then we got an email from Toastmasters International World Headquarters. We were told that the recent Table Topics segment may have upset some of our club members because of its content, and that some email communications between members afterward had not been appropriate.

As a club, we agree with the Toastmaster’s Promise to treat each other with “respect and courtesy” and maintain a “positive, friendly environment.” Yet somehow we had failed. Since a line had been crossed, we talked about the need to put some rules in writing. But that seemed like overkill in this exceptional situation with this particularly intransigent member.

What could we have done differently?

We looked to the Club Quality and Service team at Toastmasters’ World Headquarters for guidance. We were surprised to learn that Toastmasters International does not prohibit any speech topic, content or type of language. The organization’s policy on the matter states that Toastmasters recognizes that club members “may learn much about the world around them from listening to others’ speeches on a variety of subjects. This variety can add interest to meetings and stimulate thoughts and ideas.”

“If a topic makes you uncomfortable, speaking up may fill you with dread, but it’s also a chance for a challenging impromptu talk.”

At the same time, individual clubs do have the right to limit speech topics with the consensus of their members, the organization says. Toastmasters recommends that club leaders consider the specific context of their club when assessing matters of taste and sensitivity.

With 20/20 hindsight, we should have addressed the issue in real time at the Table Topics session. If a topic makes you uncomfortable, speaking up may fill you with dread, but it’s also a chance for a challenging impromptu talk. A good strategy is to acknowledge and redirect. Examples of what to say might be:

On the flip side, if you are presenting something you know can be a hot-button topic, follow the lead of one of our members who happens to be a sex educator. Her speeches often relate to her job, but she always starts with a warning about the content and tailors the speech to be respectful and avoid awkwardness. The Better Speaker Series offers a timeless tip: It’s important to know your audience. If you can relate to your audience, they will relate to you.

Another touchy area can be cultural sensitivity. I asked Ling, a Toastmaster who recently came to Canada from China, to give me her take on the subject. Spoiler alert: The answer is to make a personal connection. “I felt welcome when people took the time to talk to me and take an interest in me,” Ling recalls.

When she joined our club, we made the effort—as a group and individually—to include Ling in our conversations during breaks and invited her to join us for coffee after the meetings.

People may not mean to offend, but they can come off as being rude or uncaring through ignorance. From Ling’s point of view, “Language isn’t the big issue—it’s the cultural background and the different ways of thinking about things. I think people can be accepting if they make a sincere effort to understand other cultures. I don’t expect everyone to be the same, but if I sense people care and have a personal connection I feel more at home.”

In spite of coming from very different backgrounds, Ling and I have discovered common ground and interests. But more importantly, hearing her stories has expanded my knowledge on subjects that had been outside of my wheelhouse. Cultural communication is a two-way street. Ling was willing to open up to us when she invited our club to celebrate the Chinese New Year, and our group connection became even stronger.

When I think about culture, my mind jumps first to ethnicity or religion, but it’s bigger than that. Toastmasters’ policy is to help all people become better communicators and leaders, in an accepting atmosphere “regardless of race, color, creed, gender, national or ethnic origin, sexual orientation, or physical or mental disability.” While Ling’s observations are personal and specific to being a newcomer to Canada, they also apply to the larger issue of cultural sensitivity.

Another tricky matter that requires respectful communication is tardiness. How you deal with the issue depends on circumstances. Is it a one-off event like the issue with our bawdy Table Topicsmaster? Or is it a persistent problem for many?

If it’s an overall club problem, start with a self-check. Do your meetings always start on time? When I know that meetings consistently start 10 minutes late, I feel like I don’t have to be on time, either. 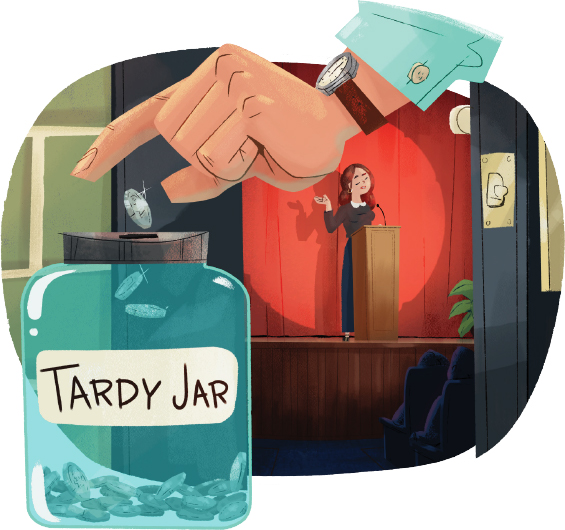 Next, speak to the tardy members privately. People may have a good reason for their lateness. When my dad was dying, I let my club know that if he was having a bad day, it would affect my attendance. Club members were very understanding. Although I was late or absent more than I wanted to be, I appreciated how I didn’t have to quit the club.

Who should be the one to talk to consistently tardy members? A good place to decide that is at a meeting of the club’s executive committee. Usually it falls to the president or sergeant at arms, but there may be someone else in the club with suitable skills willing to help out.

During an Ice Breaker, late arrivals can be especially distracting to the speaker. You could post a sign to let latecomers know to wait until the speech is done before entering the room. In some clubs, the general evaluator will call out tardiness. But if you don’t know the underlying cause, it may not solve anything and could put people off.

Personally, I like the idea of putting a nickel in the “late jar.” The jar could also be used for collecting other fines—like if a cell phone rings during a meeting. The idea is to keep the mood light but still send a message about what’s acceptable.

Or maybe your club will decide not to call attention to it. After all, people are late to meetings in real life too and chances are you’ll encounter the situation outside the club setting.

Although I joined Toastmasters to learn how to give speeches, I have also learned that communication is more than standing at a lectern. Working with my fellow club members to solve real-world communication and leadership problems has been an unexpected benefit.

Whether it’s dealing with inappropriate content, cultural insensitivity or a member who is always late, I have learned skills that I can apply in the wider world. Those skills are based on the core of the Toastmasters credo. It’s about communicating effectively in any situation—and effective communication often boils down to having respect for each other.