On the Write Path Now

Former actuary finds her passion in the world of words. 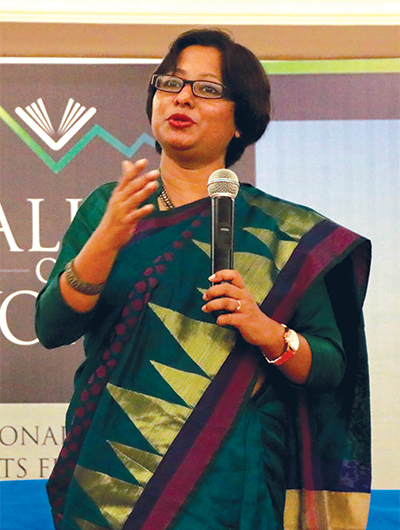 Sinjini Sengupta’s debut novel, Elixir, released in December 2017, has been a best-seller on Amazon in India. She has won awards in that country and abroad for her poetry and screenwriting—including for the film version of Elixir.

Considered one of India’s top female bloggers, she also contributes to pub­lications with international audiences, like the Huffington Post. And as a ­speaker, the native of Kolkata (once known as Calcutta) has given TEDx Talks and was a 2017 district finalist in the Toastmasters World Championship of Public Speaking. Her speech was on unconditional love.

All this acclaim in the world of words has happened relatively quickly for Sengupta, ACS, ALB, a resident of Gurgaon in Haryana, India. An alumnus of the prestigious Indian Statistical Institute, she had been working diligently as an actuary for several years, managing financial risk for a multinational corporation. She says she was “addicted to her healthy paycheck” and had no idea of other possibilities her life may have held.

In her 9-to-5 job as an actuary, Sengupta remained unaware she could “write anything other than PowerPoint slides for business presentations or bullet points on meeting-room whiteboards.” Then illness struck: depression, fibromyalgia, spinal problems, severe body aches. It all resulted in months of bed rest. Her doctors—she consulted more than a dozen—gave her a stern warning: It was either take a break from work, or face a total breakdown.

The jarring health crisis, however, turned out to be life-changing in a positive way. In its gloomy depths, Sengupta would discover her voice as a writer. Her creative soul emerged and flourished, and she has not looked back.

“I cannot exactly say if I picked up the pen or the pen picked me up, but something like that happened in between analgesics, physiotherapy sessions and long hours of medicated sleep,” Sengupta says. “When I left my job and was bedridden, I discovered writing more as a survival instinct, and I used it for catharsis.”

From Numbers to Narratives

Sengupta, a member of the Gurgaon Champions Toastmasters club, went from crunching numbers to crafting narratives that are eloquent, soulful tapestries brimming with raw, honest emotion. “Water!,” a poem she wrote in 2016 about love and relationships, was named a winner in a national poetry contest sponsored by the Times of India.

“When I left my job and was bedridden, I dis­covered writing more as a survival instinct, and I used it for catharsis.”

She’s also not afraid to voice strong and potentially controversial views. In her columns and speeches, she is a passionate advocate for emotional well-being and social reforms such as gender equality.

She gave her first TEDx Talk in November 2017 at a TEDx event in Meerut, Uttar Pradesh, India. Sengupta spoke on gender sensitivity in parenting, pointing out the biases inherent in children’s toys and Disney stories, for example.

At the same time, antagonizing and alienating her audience is the last thing she wants to do. She says she is all about open, honest dialogue, not diatribe and dogma. She has learned that being strident and self-righteous is a sure way to shut down conversation. 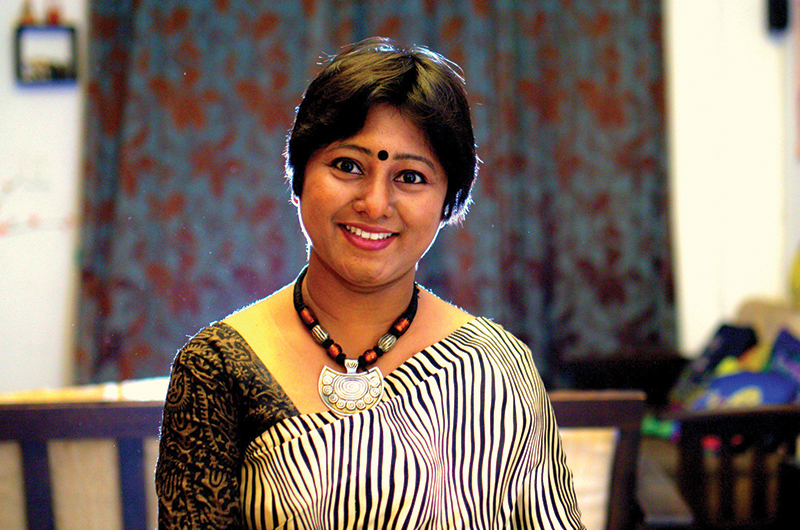 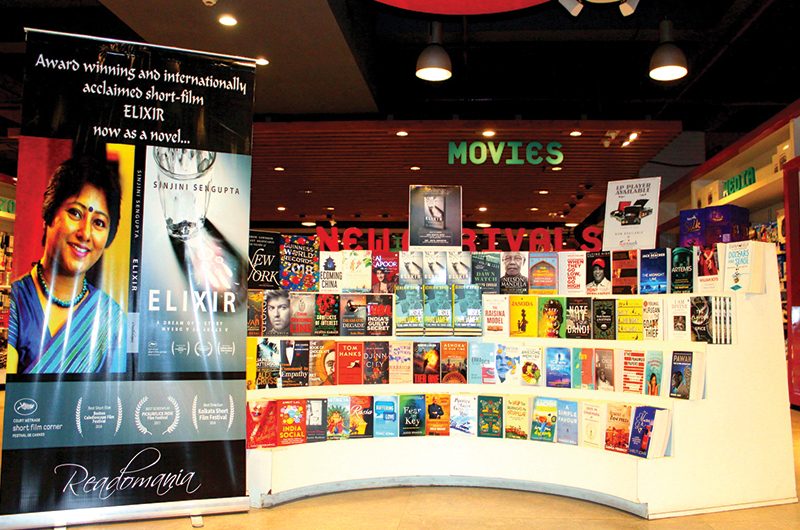 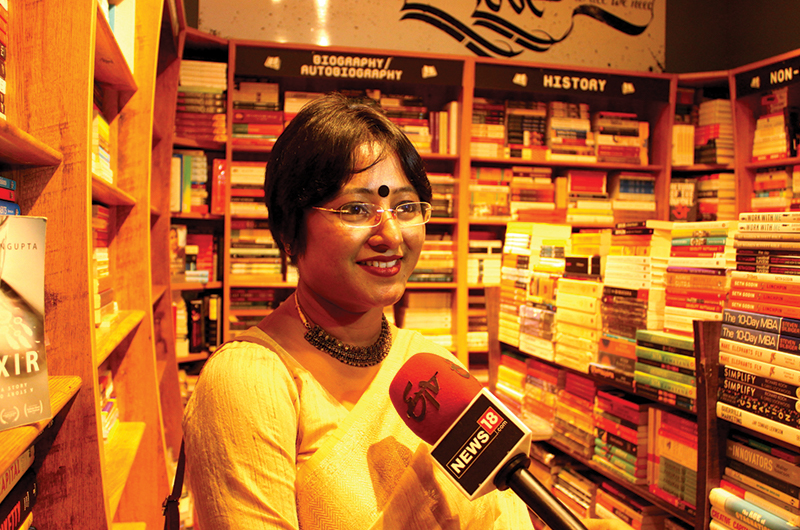 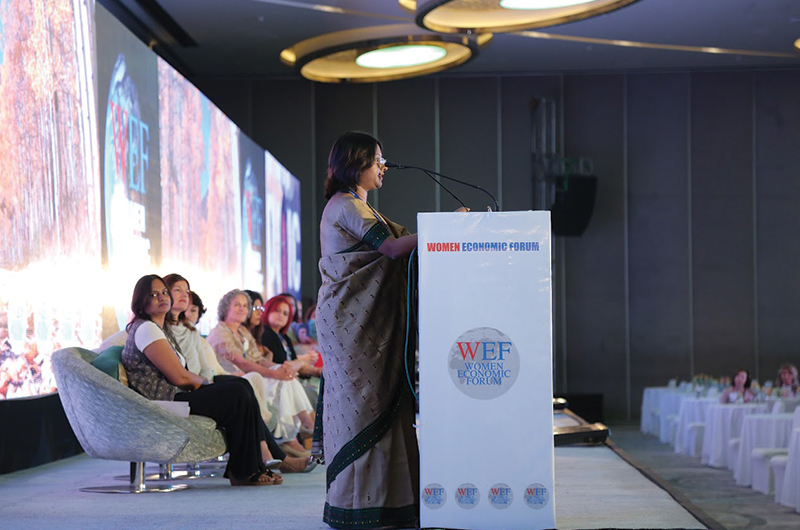 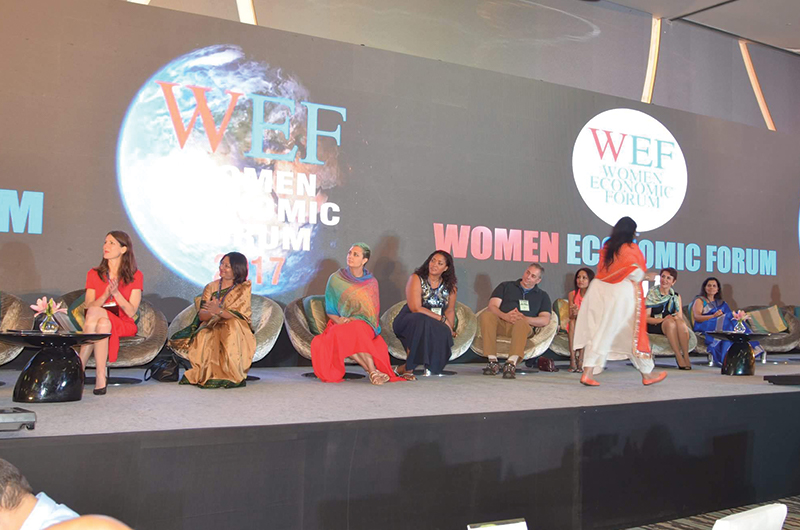 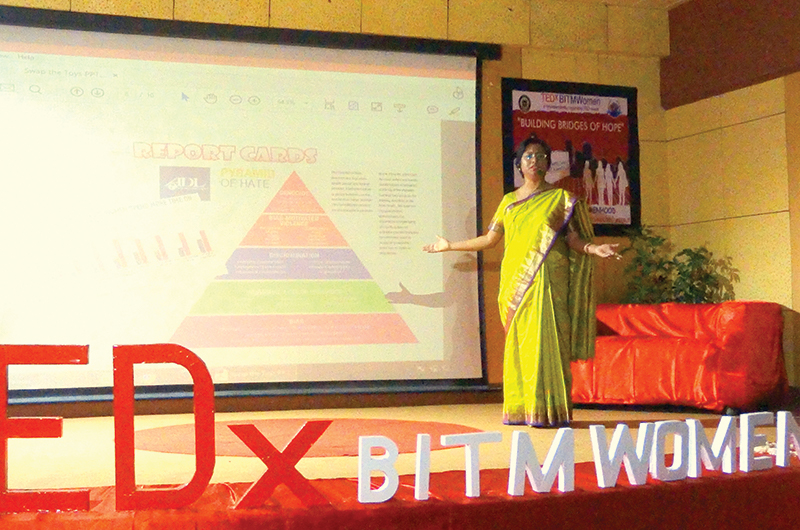 Though relatively new as a blogger and columnist, Sengupta says she has evolved in her approach. “A couple of years back, I’d take stronger stances and would be more black-and-white about what I thought was the right or wrong thing to do. I thought I knew a lot of answers.

“Now, I’ve mellowed in the ways in which I lay my protests, my claims.”

Sengupta, who writes in both English and the Bengali language, says change “can’t be brought about through divisive hatred. Change is a slow process and it has to be internalized. It can’t be forced on people.”

“During the contest season, whenever I met her, Sinjini came across as a very committed and focused person,” says ­Menon, a longtime Toastmaster who belongs to several clubs in India. “She had clarity of vision and knew her goals.”

Menon adds that Sengupta was easy to coach—she responded positively to his advice and was quick to make adjustments to improve her public speaking. “Sinjini is an asset for Toastmasters and serves as a testimonial to how our organization changes the lives of our members.”

Sengupta’s writing ranges from dreamy, evocative meditations to piercing commentaries on current events, social issues and the shared human plight. Some of her stories strike a chord mainly with her countrywomen in India. Most of them, however, cut across boundaries of ethnicity, nationality and gender.

In Elixir, she tells of a woman’s journey through conflict into redemption as she co-exists in two worlds: the mundane, grinding reality of her days, and the surreal, transcendent dreams of her nights. The distinction between the two realms gradually blurs. In truth, who’s to say which is more real, more valid, if the latter can bring happiness?

In 2016, Elixir was shown at the Cannes Short Film Corner, organized by the famed Cannes Film Festival in France. After the film was screened in Cannes, the response to it made Sengupta realize

“the story is neither Indian nor just about women.” Reflecting on the story’s themes—such as the lack of emotional connection in modern urban lifestyles—she says, “We are all headed in the same direction irrespective of our social, economic or geographic positions. Love is our common pursuit, and fear is our common demon.

“We have the same cracks and similar vulnerabilities in our lives, it seems, and we are all on our journey for redemption.”

The book started out as a short story that Sengupta wrote on her Blackberry on her ride back from work one night. It was then made into a short film directed by her husband, Anirban Guha. Elixir was screened at the Cannes event as well as international film festivals worldwide. It picked up a number of awards, including Best Short Film at Boston’s Bengali Film Festival Caleidoscope and Best Screenplay for Sengupta at the Pickurflick Festival in India.

After one of the screenings of the film, she received an on-the-spot offer for a book contract from an Indian publishing house. She didn’t even have a manuscript yet. Eventually, she turned Elixir into a novel. The whole process, she says, has been like a string of miracles.

Today, when asked about her plans for the future, Sengupta says she is reluctant to set goals for her creative life.

“I want to let myself be surprised. I want to trust my instincts, toy with my creative inspiration and follow my guts. The rest, I have come to believe now, will simply fall into place.”

Learn more about Sinjini Sengupta and her work at:

Her novel Elixir is available in paperback in India, the U.S. and Canada on Amazon and on Kindle around the world.