For many Toastmasters, a new year means a whole new set of goals. Will this be the year you run for a club officer role, lead a committee at work or earn a new education award?

Whatever your personal and professional goals, consider taking some cues from history-making athlete Lauryn Williams, a Toastmaster from Texas. Not only did Williams win an Olympic gold medal as a sprinter in 2012, she later won a silver medal in an entirely different Olympic sport: bobsledding. She became just the second American (and first American woman) ever to win medals in both the Summer and Winter Olympics. Only five athletes in all have accomplished this remarkable feat. 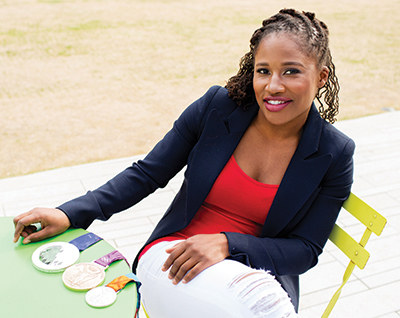 To excel at the highest levels of two sports, Williams made goal-setting a key part of her routine, and she continues the habit today. She writes her goals on a chalkboard wall in her house to hold herself accountable.

“I’m very task-oriented, so goals fit into my task category the same way I’d write down a task like getting my oil changed,” says Williams, a four-time Olympian and three-time medal winner. “It’s a way of reminding myself that something is on my list. Then I ask myself what I’m doing to get it done.”

Williams, CC, started running track when she was 9. She was always education-oriented, and in high school she realized her success as a sprinter could help her get a free college education. She made that a goal—and achieved it when she earned a full athletic scholarship to the University of Miami.


During her college career, she won many national honors and broke a series of sprint records. After her junior season, she began training for the Olympics—three hours a day, six days a week. Training included physical therapy, stretching, a proper diet and getting enough rest. “It really does make it a full-time job,” says Williams, a member of the TNT Toastmasters club in Addison, Texas.

The work paid off. In the 2004 Olympics in Athens, Greece, she ran the 100-meter dash in 10.96 seconds and won the silver medal. “It was a really gratifying moment,” recalls the 33-year-old. “Those medals represent so much more than just what they are materially. They are for the community, for my family and for my friends and coach. I received so many different levels of support that helped me get to that point that I really understood in that moment what it means when people say it takes a village to accomplish something great.”

“You just have to keep moving up through all the different levels of smaller goals to help you achieve those bigger goals.”

Over the next two years, Williams won several gold and silver medals while competing on the national and international levels. However, her 2006 season was cut short due to a hamstring injury. Coping with injuries is part of being a professional athlete, and Williams’ way of staying motivated during her recovery was to set small, manageable goals for herself. This applies to all aspects of life, she notes. Breaking a large goal into several smaller goals boosts your chance of success.

Williams recovered from the injury and continued her Olympics success. In the 2008 Games in Beijing, she came in fourth in the 100-meter dash, and in the 2012 Games in London, Williams and her three teammates won gold in the 100-meter relay race. Subsequently, she retired from track and field, but that wasn’t the end of her Olympic journey. In 2013, inspired by a fellow Olympic track athlete who became a bobsledder—hurdler Lolo Jones—Williams decided to try the sport herself. But she had to travel far from her home in Texas to do her bobsled training. “You have to go to where the bobsled tracks are: Calgary, Canada; Park City, Utah; and Lake Placid, New York.” 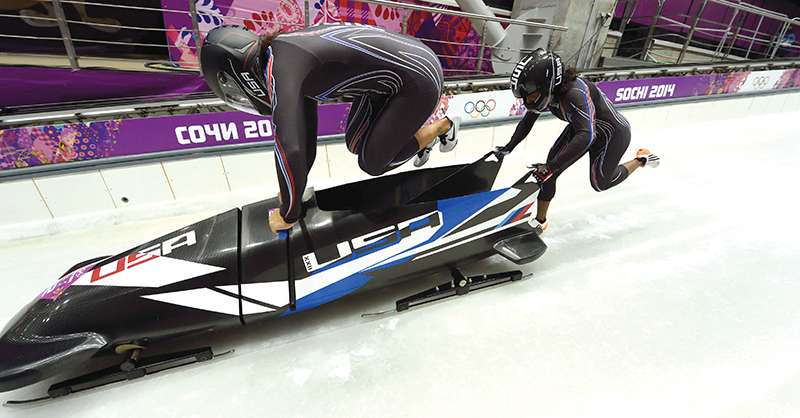 Williams, right, and her partner, Elana Meyers Taylor, compete during the Two-Woman Bobsleigh event at the 2014 Winter Olympics in Russia. Photo by Bob Martin.

A post that year from Williams’ blog shows how much joy she found in the sport. “Running downhill on ice pushing a 400-pound sled may sound crazy to some, but I am having SO MUCH FUN!” she wrote.

She was selected to join the U.S. Olympic bobsled team and competed in the 2014 Winter Olympics in Sochi, Russia. Williams and her bobsled partner, Elana Meyers Taylor, took home a silver medal.

Now retired from professional athletics, Williams is focused on achieving goals in other areas of her life. Her main aspiration is to keep building her financial planning business, which serves professional athletes and young professionals. Williams was a finance major in college and later earned an MBA. She felt there was a need for her business, which is called Worth Winning. Williams says she met many athletes who didn’t have their finances in order, adding that she was "not treated very well" in her own experience reaching out to different financial advisers.

“I think the biggest challenge transitioning from an athlete to the business world was having confidence in myself,” adds Williams. “Financial planning is a topic I had lots of education on but not a lot of hands-on experience with, so speaking eloquently in front of people made me very nervous even though I knew the topic.”

Williams joined the TNT Toastmasters club in 2014 to improve her speaking skills. She says the experience has been highly valuable. “Toastmasters has helped in my finance career because I’m constantly pitching people and sharing my elevator speech,” she says. “The hardest part when you’re starting a new company is trying to market it to people and not sound too sales-y but also sound passionate about what you do, and not being afraid to talk about it as much as you can and garner interest.”


TNT club president Shelley Cramm, CC, CL, says Williams has refined her delivery, including her ability to give a speech within a time limit. “There’s an art to getting your message across on time and being able to train yourself to save time at the beginning for that powerful ending,” Cramm says. “Lauryn has definitely grown in that area.”

“I think the biggest challenge transitioning from an athlete to the business world was having confidence in myself.”

In addition, Toastmasters has boosted her confidence in social situations, says Williams. “It’s helped me a lot in terms of interacting with others and really connecting with the person that I’m speaking to…. Being more confident in speaking has allowed me to really engage in a conversation.”

Toastmasters training has definite value for professional athletes, she adds. “I think athletes are put in positions where they’re talking in front of people quite frequently, even if it’s not a formal speaking engagement, and Toastmasters for them would be great for helping them prepare speeches as well as speak to the media.”

Besides leading financial-planning seminars for her business, Williams gives motivational speeches at conferences, schools and athletic clubs. She talks to children as well as to employees of corporations.

And the former Olympian has a new goal.

“I am looking to join some speakers bureaus now that I am feeling more confident about my speaking.”

Speaking Out to Clean Up Sports

Speaking Out to Clean Up Sports

Williams speaks at the 29th Annual Great Sports Legends Dinner in September 2014, at The Waldorf Astoria, New York City.
Olympic gold medalist and Toastmaster Lauryn Williams is combining her speaking and communication skills with her athletic expertise to serve as a volunteer for the World Anti-Doping Agency.


Doping—athletes taking illegal substances to improve their performances—has cast a shadow over the Olympics, as well as other sports, over the years. Williams is one of many athletes trying to improve the situation. As a volunteer for the World Anti-Doping Agency (WADA), she helps with outreach programs.

“Generally, our job is to be advocates for athletes worldwide who are competing in Olympic sports and being tested under the WADA umbrella,” she says.

Williams also spoke on TV about the doping issue. Shortly before the 2016 Olympics began, Russia’s track and field team was barred by the International Association of Athletics Federations (IAAF) from competing in the 2016 Games. The organization alleged widespread doping among Russia’s track and field athletes. On the heels of that ruling, Williams sat down for a one-on-one interview in a news segment aired on the NBC TV network. She praised the IAAF’s decision and spoke of how more steps need to be taken in the anti-doping campaign so that all athletes can compete fairly against each other. “We need to work together to level the playing field,” she said in the TV interview.

The 2016 Olympics, held last summer in Rio de Janeiro, was a prime opportunity to make an impact on athletes around the world, and Williams did her part.

“There was a big booth set up in the cafeteria, in the Olympic village, and we were educating people on cleaning up the sport, about morals and values as they pertain to sports and what [substances] you can and can’t take,” she says.

“We talked about the processes there are if you need to see a doctor and take something, and how to let people know in the appropriate way so it doesn’t affect your competition.”

Williams says she went to a bobsledding event recently and did similar work, spreading the word about staying clean in sports.

“These aren’t really speaking engagements as much as they are outreach events where we talk and try to share the message of clean sports with people who are currently competing, and then with young children who are competing who could end up becoming Olympic athletes one day.”