Four members share their stories of transformation and lessons learned. 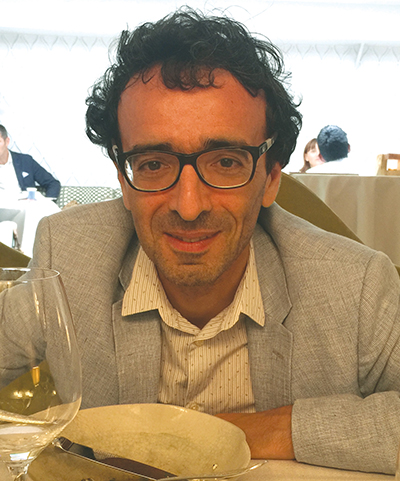 A Global Family
In 2013, I traveled to Libreville, Gabon (a French-speaking country on the west coast of Central Africa) for a business conference, where a participant spoke about how he had created a Toastmasters club months earlier. While there I visited his club—an unbelievable experience.

The meeting took place in a schoolroom that looked like it could have existed in pre-World War II Europe. The temperature was about 35 degrees Celsius (95 degrees Fahrenheit). The business portion started with the payment of fees—the average income in this country is low, but nearly all participants were ready to sacrifice quite a lot to join. Among the participants were two businessmen, army officers, half a dozen students and even a nun.

Introducing myself, I explained that I was French but that my journey with Toastmasters had started in Jordan. Then the meeting ­began with the “joke master,” who succeeded in making us all laugh. He was followed by two speakers. Both speeches were extremely moving. In one, a young girl spoke about her 13 brothers and sisters and how, despite the death of both of her parents, she managed to study at a university. The second speech was by a bright student who presented quotes from difficult French authors. The grammarian was particularly draconian with respect to the rules of the French language. In the end, they asked me to evaluate the meeting and the speeches.

I had experienced the Toastmasters spirit in Jordan, which enriched my life in so many aspects, not only by developing my communication and leadership skills but, most importantly, by enabling me to meet wonderful friends. To discover that this wonderful spirit is alive in West-Central Africa is a heart opener. Thank you, Toastmasters, for connecting and bonding people and bridging differences among members regardless of their race, background, culture or religion, turning us all into one great global family. 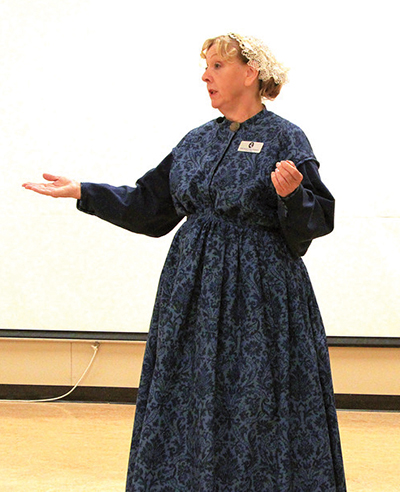 A Step Into History
Toastmasters introduced me to a woman who changed my life. In 2013, I was searching for a speech for the Interpretive Reading project in the Advanced Communication Series when I stumbled on a speech given by Elizabeth Cady Stanton in 1848 in Seneca Falls, New York.

In Stanton’s speech, “A Declaration of Rights and Sentiments,” she called for the right of women to vote. Her words contained such passion and intellect, and she had a delightfully ­bombastic oratorical style. I edited her speech to the required time limit for the project and delivered my interpretation of it to my club. The evaluator remarked, “Rebecca, you just need a costume.” Inspired by his comment, I had a historical costume made and began giving Stanton’s speech to friends and to clubs.

This speech was only the beginning of my journey. I wanted to know more about the history of women’s right to vote in the United States. Like peeling an onion, I found that one book led to another. I read every book I could find about Stanton, then moved on to read about Susan B. Anthony, Alice Paul, Carrie Chapman Catt and others who advanced the cause toward women’s equality and gave speeches about this fascinating part of American history.

I have now given presentations at the Missouri History Museum, re-creating the famous speech by Elizabeth Cady Stanton and speaking on the history of the women’s suffrage movement. I also spoke at the Celebrate the Vote Festival. I am working on a St. Louis Suffrage Centennial event, as well as other projects.

Finding that speech has been the springboard to my passion and joy, and the skills I learned in Toastmasters have enabled me to share history with a wider audience. 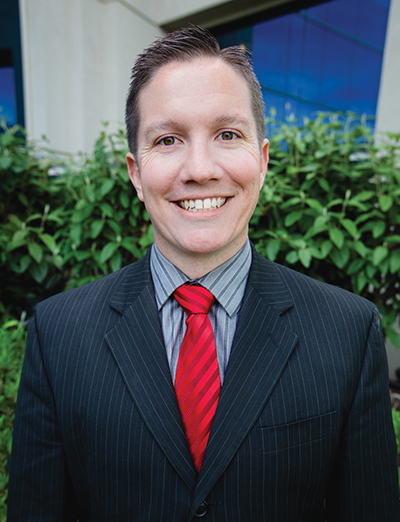 The Three Lessons I’ve Learned
In high school I competed on the speech team and never did really well. I only made it to the final round of a speech tournament one time and it was at the smallest meet of the year, where I placed 7th. Despite that, I still felt confident about speaking in front of a crowd.

Then, during my second year in college, I decided to get my public speaking course out of the way. The instructor was pleasant, the topics were fun and I started to get really good with PowerPoint. I finished the class with very high marks.

Then, about two years ago, I found myself giving a presentation at work. The speaker before me and the speaker after me were both fantastic. I paled in comparison. I knew I had a lot of room for improvement, and when I spoke with my manager about this concern, he suggested I join Toastmasters as part of my professional development.

After two years in a Toastmasters club, here are some new things I didn’t expect to learn:

Leadership. When I began exploring Toastmasters, I had no idea about the leadership track. I’ve served as vice president public relations, president and vice president education. I’ve learned how to build interest in the club, keep a meeting running on time and schedule an event with several moving pieces.

Preparation. As a newly appointed area director, I understand the timing, planning and preparation that goes into meetings and contests. I’ve learned that a simple one-hour meeting takes participation from several people, and everyone must do their part to be effective. Additionally, I learned that where I lacked wasn’t in my presentation skills, but in my preparation skills.

Writing. While teaching young adults about speeches recently, one of my fellow Toastmasters spoke about the importance of every word. When you have only five to seven minutes to speak, you have to make every word count. I have not only improved my writing skills but discovered that I have a passion for it—a discovery I would have never have made without Toastmasters. 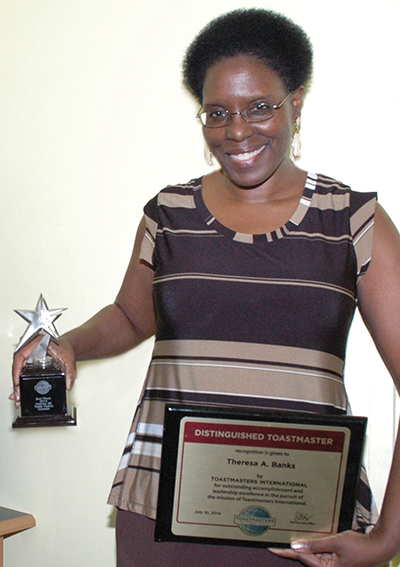 I Have Transformed
In February 1999, my manager, Renee Buckhanan, asked me to read a poem before a large group of people during a special event in downtown Chicago. As I spoke, my voice was quivering, my posture was slouched and I thought I’d knock over the lectern at any given moment. Once I finished, co-workers told me I sounded fine, but I lacked the confidence to believe them.

In April of the same year, I joined Toastmasters.  I’d heard of the organization and wanted to see if it could help me. I read through the manuals and presented every lesson as instructed. I was afraid at first, and often hyperventilated while walking to the lectern.  However, after I delivered speech number six from the Communication and Leadership Program manual (now called Competent Communication), something clicked!

Up until that point, every evaluation had boosted my confidence. After the sixth speech, I finally started to believe I could overcome my fear of public speaking. I continued executing lessons from my manual, and was encouraged along the way by seasoned members like Charles Brooks, DTM, PDG. Now I’m a DTM! I can comfortably speak before an audience of any size, and I’m excited to take on leadership roles.

Toastmasters will work for any member that puts forth the effort to change, and that member will work alongside some of the best people they’ll ever meet in their life. I’ve transformed from an introvert to an extrovert.  I’ve developed into my authentic self. I’ll always remain a member of Toastmasters. I’m still learning, growing and helping others.