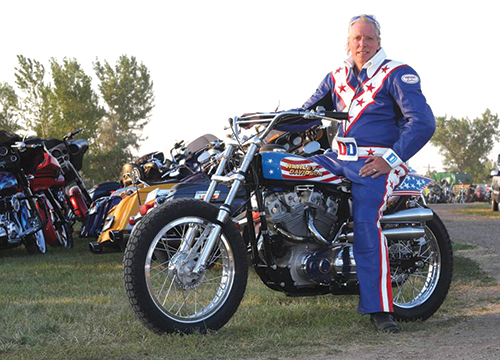 Doug Danger, 54, is a motorcycle daredevil, motivational speaker and Toastmaster from Massachusetts. He has made over 3,000 jumps in his career. Photo credit: Marilyn Stemp

For Doug Senecal, better known as Doug Danger, giving his first speech for the Village Toastmasters in Sturbridge, Massachusetts, was scarier than addressing a crowd of 10,000 people before performing one of the death-defying motorcycle jumps he’s famous for.

“Speaking in front of 10,000 people is different from when you’re in a room full of 20 people and you can look into the eyes of every single person you’re talking to, and you know you’re gonna talk to every single one of them afterward and that if you mess up, they’re gonna let you know,” says Danger, a world-record-breaking motorcycle jumper, as well as a motivational speaker, from Palmer, Massachusetts. “If you screw up when you’re on the microphone in front of 10,000 people, they’ll know it, but you’ll be leaving and in another town the next day.”

Having performed more than 3,000 jumps in his daredevil career, Danger knows what it’s like to feel fear. The 54-year-old says he’s learned over the years not only to embrace fear, but to harness it. “I don’t eliminate fear; I use fear to heighten my awareness of all of the things that could go wrong around me,” he says. “I apply that in my business and in my life, and it’s kept me alive as a motorcycle jumper.”

Danger’s ability to use his fear to his advantage has helped steer him through some tough experiences, including recovering from a devastating motorcycle crash in 1992 and surviving a battle with stage 4 cancer in 2012. It’s also helped him break several world records. Most recently, in August 2015, Danger broke a world record by jumping over 22 cars on the late Evel Knievel’s 1972 Harley-Davidson XR-750 motorcycle in Sturgis, South -Dakota. “It was one of the greatest days of my life,” Danger says.

While Danger has no plans to stop jumping anytime soon, he credits joining the Village Toastmasters in 2012 with leading him toward a new career as a motivational speaker. “Toastmasters changed my life,” he says. “It gave me a vision for the future of what I can do after I get done jumping.”

At 5 years old, Danger knew he wanted to be a professional motorcycle jumper. That year, his father took him to see Evel Knievel, his childhood hero, attempt to jump over the water fountains at Caesars Palace in Las Vegas. “I watched Evel have his terrible crash,” Danger says. “Everyone was telling my father to get me away from there—that it’s a terrible thing for a kid to see—so my dad asks if I’m okay, and I say, ‘Yeah, Dad, but I think I could have made that.’ And my career began.”

Danger got his first bicycle a year later and began honing his daredevil skills. It wasn’t long before he was building ramps and jumping over trash cans, picnic tables and even cars and people. At 12, he moved up to riding dirt bikes.

Danger performed his first professional jump at 17. Five years later, in 1985, he broke a world record by jumping over 14 buses on a 125cc (cubic centimeters) dirt bike. Then, in 1990, he jumped over 25 cars and broke the 250cc dirt bike world record.

In 1991, Danger soared 251 feet over 42 cars on a 500cc dirt bike, breaking the world record for the longest motorcycle jump and earning him recognition by the Guinness Book of World Records. He held that record for nine years.

Danger’s record-breaking jump last year, on Evel Knievel’s old motorcycle, was his way of honoring the legendary daredevil, whom Danger met and befriended earlier in his career. “It wasn’t really about trying to set a record on that jump,” he says. “Evel Knievel tried to jump 22 cars, but he only cleared 21, so I was just trying to finish the jump for him. Now we hold the world record together.”

Not only has Danger broken records, but he’s also broken bones and suffered from serious injuries. In 1992, a miss during a jump in New Hampshire left Danger with 17 broken bones, including a fractured skull. “It was only 11 cars, but I missed one of them and ended up hitting a cement wall headfirst at about 55 mph,” Danger says. 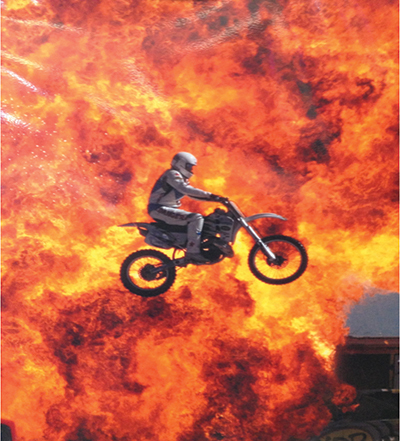 It was a little over a year before Danger recovered enough to get back on his motorcycle. He says watching videos of himself performing jumps before his accident drove him to get better.
“I fell back in love with jumping just by seeing myself doing it,”
he says. “I wanted to be that guy again.”

After he fully healed, Danger performed feats including jumping a Lockheed L-1011 jet from wing tip to wing tip and breaking a record for soaring over 18 tractor-trailers before he faced his toughest challenge yet: a battle with stage 4 tonsil cancer.

“I knew it was bad news when my doctor told me to sit down when I came in,” Danger says. “Then he tells me I’ve probably got about three to six months left to live.” Rather than accepting defeat when his doctor told him that only 5 percent of people beat the type of cancer he had when it had reached that stage, Danger felt determined. “I said to my doctor, ‘5 percent? Do you know what I do for a living?’” Danger says. “I told him, ‘Look, I’m one of those five people out of a hundred who’s gonna make it. Trust me on this. You do whatever you’ve got to do, and I’m gonna beat it.’”

And he did. After Danger was diagnosed with cancer in January 2012, his doctor started him on an experimental chemotherapy treatment, and by August, Danger was cancer-free.

Since his brush with cancer, Danger has been building a second career as a motivational speaker. He wasn’t a stranger to public speaking prior to becoming a Toastmaster—for years he’d been sharing anti-drug messages with audiences before his jumps. “I lost my best friend to a drug overdose right after we graduated high school,” he says. “So I always talk about him at my shows.”

Danger says joining the Village Toastmasters helped him learn to express himself more clearly and confidently. “I feel very comfortable anytime I’m speaking now,” he says. “Toastmasters helped me eliminate things like filler words that took away from the professionalism of my delivery.”

Dennis McCurdy, ACG, who is founding president of the Village Toastmasters, says he’s noticed a marked improvement in Danger’s presentation skills over the last four years. “We’re all kind of rough when we join Toastmasters, but Doug has really perfected his technique and his style,” he says. “He’s really come a long way and become quite a dynamic speaker.”

“Toastmasters changed my life. It gave me a vision for the future of what I can do after I get done jumping.”

Danger’s dedication to improving his speaking abilities has paid off. In 2014, he won first place in his club’s International Speech Contest as well as at the area-level competition.

In the last two years, Danger has given speeches for community organizations such as Rotary clubs as well as schools and other large audiences. He talks about his experiences performing record-breaking jumps, overcoming tragedies, believing in dreams and embracing fear. He encourages his audiences to “live life full throttle,” and not to let fear of failure prevent them from trying to achieve their goals.

Danger’s stories resonate with audiences of all ages, according to Margo Chevers, an author and former professional speaker who coaches Danger on his speaking skills.

“He has such a message and he delivers it with such humanity and humility that his audiences just fall in love with him,” she says. “I went to a session that he did with high schoolers recently. High schoolers can be a tough group, but he had them. He just had them in the palm of his hand.”