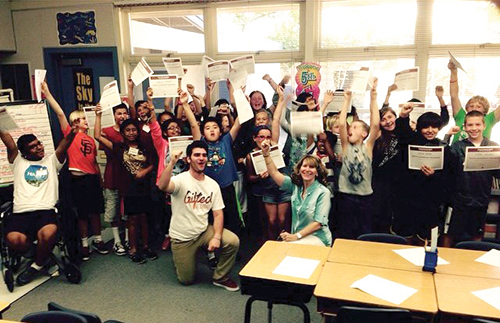 Many of us, as parents, get caught up in the daily grind and responsibilities of teaching our children to work hard, be model citizens and do their best. If we have extra time we try to help them identify their dreams and reach for the stars. Sometimes we forget the pure joy of just being around those special young minds.

Now that my son is in college and my nest is quiet, I have just completed my second year as a mentor for Toastmasters’ Youth Leadership Program in a local 5th grade class. I find pure joy and delight in working with kids.

How can one teach all the many lessons Toastmasters offers in nine short weeks? With 28 kids, each child has time for just two speeches during the session. Simply put, I try to instill in each of them a method for imparting their stories as dynamically as possible.

Besides the basics of clear content, body language, eye contact, gestures, humor and props, I seek to inspire them to open each speech with a bang by using a startling statement or interesting prop or visual or by asking a question to get their classmates thinking and interacting. One student talked about how she makes cooking creative, another demonstrated basketball moves and yet another showed off her amazing artwork.

We infuse some fun during Table Topics, giving them the freedom to try a variety of improvisational games. For example, to emphasize body language, one child speaks while the other gestures. To emphasize listening, we play a game where the leader begins a story and each participant adds to it.

If you find yourself with extra time after emptying your nest, start a Youth Leadership Program. You’ll be glad you did. 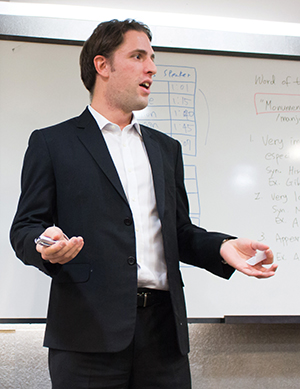 
The Best Club in the World

I always read the My Turn column in the Toastmaster magazine because it reflects real success stories—stories of incredible achievements by people with difficult backgrounds or in tough situations, but who managed to overcome their challenges to realize their dreams.

Things are quite different for me. I consider myself a rather normal person. I love to travel to places where I do not speak the language, and for a long time I lived in a land in which I did not master the language. I also spent two years in isolation on a construction site in the desert. Consequently, my social skills were at their lowest; so low that I was afraid to talk to strangers. Speaking in front of a crowd seemed an achievement sourced in science fiction.

In mid-2014, I quit my job and spent the next six months traveling. It was then time to find another job. In early 2015, I was back in Seoul, and after many failed interviews and awkward meetings, it was time for me to improve my skills as a speaker. I had heard of Toastmasters, but was not sure about it, yet I took a leap of faith and joined the Seoul club. In the meantime, I successfully interviewed for several jobs, and took an interesting one as a business development manager in Korea for foreign corporations. The job requires me to speak and lead in a multicultural environment, and I’ve spoken twice at national events.

My life has improved after just a year and a half in Toastmasters. That is why to me, as well as others, Seoul Toastmasters is the best club in the world. 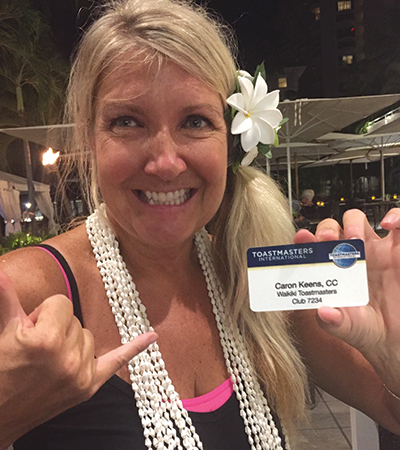 In November 2013, in Boston, I attended an event where we were strongly encouraged to join Toastmasters. We were told it would provide us with confidence and the ability to connect with an audience and more effectively share our messages. I remember thinking I was “fine” and certainly would not need to join.

About a year later, my husband and I secured a contract for a one-year work term in Oahu, Hawaii. We quickly settled into a routine and felt the “aloha energy” every day of our adventure. I worked diligently on my own business (A Good & Kind Company) and reflected on how many people told me I should be a public speaker. I felt the calling and considered incorporating public speaking into my work.

It wasn’t until June 2015 that I decided to take the next step. I made a call to the closest Toastmasters club and got the details. Two things happened during my first meeting in Waikiki Toastmasters; I made people laugh and I won the “award” for the most ahs and ums. My next decision still surprises me to this day. Our visas were due to expire in October, so I had just over three months to complete my Competent Communication manual while in Hawaii. I decided to go for it!

Waikiki Toastmasters is the epitome of a group of people who want others to succeed. They bring out the best in each other by providing support and constructive feedback, celebrating accomplishments and leading with integrity. In November, I was honored by receiving the club’s Outstanding Toastmaster award.

Toastmasters has had a wonderful ripple effect in my life. It has given me not only confidence but the validation that anyone can face their fears. The only one holding us back is ourselves! 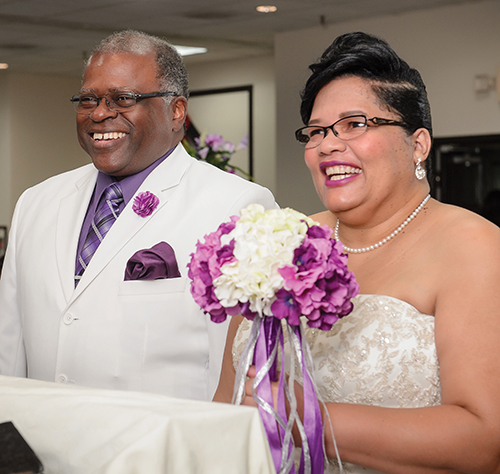 
From Mentorship to Marriage

In 2009, Bruce Adams attended the area contest where I was speaking about having to remove jackets, shoes, jewelry and other items when going through security at an airport.

Later, Bruce told me how much he enjoyed my speech. I did not see him again until I became area governor the following term and visited the Sysco club, his club at the time. I was dressed in a nice suit and heels and I was ready to present my speech.

Shortly after I arrived, Bruce came through the door and his first words were, “Hey, I remember you, you were the lady who was taking her clothes off.” Oh, if you could see the surprise and perplexity of the members as they looked on with dismay. After my jaw dropped, I quickly said, “Mr. Adams, you need to fix that statement.” He chuckled, and quickly explained how we actually met. It was the beginning of a great friendship.

Bruce met with me briefly after the meeting and asked if we could meet for lunch. He wanted me to help him work through his Competent Leadership (CL) manual. I accepted.

A week later we met at one of his favorite restaurants. I explained how he could proceed through the CC and the CL manuals simultaneously, and told him how to finish each project. I pointed out the completion record in the back of each manual and gave him advice on projects. I became Bruce’s mentor that day.

We had many more conversations about Toastmasters, and six years later, in December 2015, my fellow Toastmaster became my husband.

Bruce and I still share our passion and love for Toastmasters. We enjoy educating new and seasoned members on the art of being powerful speakers and stellar leaders.

Do you have a Toastmasters success story you’d like to share about yourself or another member? Tell us in 300 words or less and send with a high-resolution photo.