December 2022 View PDF
×
Got year-end supply orders? Place orders by 11:59 p.m. Mountain Time December 13 to be shipped by December 22. All orders received after that date will begin shipping January 3, 2023.
The 10 competitors in the World Championship of Public Speaking stand with contest chair Balraj Arunasalam (far right). 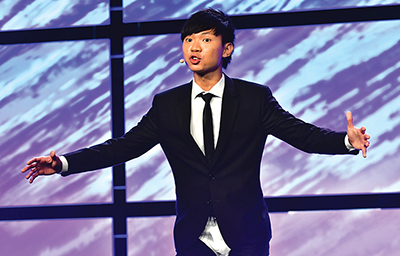 You’ve probably heard of this old trick for taming a speaker’s nerves: Picture audience members in their underwear. When Darren Tay began his speech in the 2016 Toastmasters World Championship of Public Speaking®, it was the other way around. Audience members saw the speaker in his underwear.

Tay walked onstage in a sleek black suit, paused to look at the audience, then promptly pulled a pair of white Calvin Klein briefs from his pocket. He stepped into the undergarment and stretched it around his waist, where it remained for the next several minutes. The unique prop was part of a speech about bullying that propelled Tay to victory over nine other finalists from across the world.

The 10 finalists were the last ones standing among 30,000 speakers who competed in this year’s International Speech Contest. The six-month competition concluded with the semifinals and finals at the International Convention, held in August in Washington, D.C. 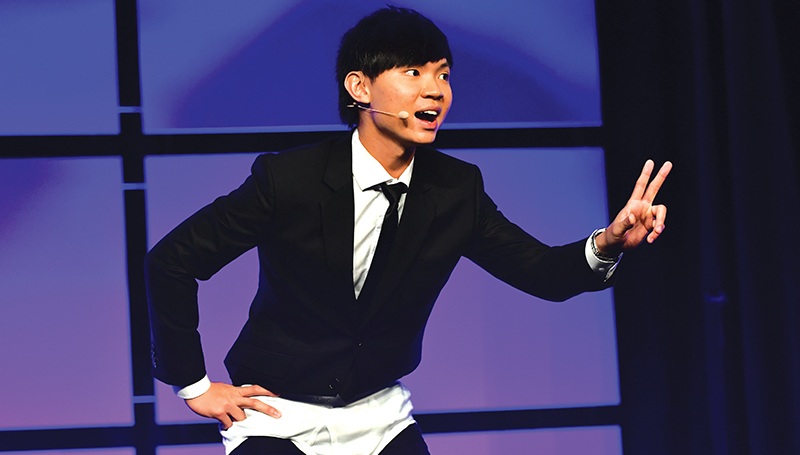 Tay dons underwear over his pants in his speech about bullying.

Tay, ACG, ALB, is the first winner from Singapore in the history of the World Championship of Public Speaking. When he was announced as the winner by Mike Storkey, the Toastmasters 2016–2017 International President, Tay pumped his fist and excitedly ran up to the stage, where he promptly snapped a selfie of himself and Storkey.

This year’s championship featured other notable developments as well. While last year’s finals did not include any women, this year five of the 10 finalists were women. Millennials also made a mark: The top three finishers are all under age 30. Both Tay and second-place winner Aaron Beverly are 27, while third-place winner Josephine Lee is 28.

Beverly is a project manager from Philadelphia, Pennsylvania. His speech centered on a message about speaking to others: It’s not how much you talk that matters, it’s what you say when you do. Beverly’s tongue-in-cheek speech title said it all: “Leave a lasting memory using as few words as possible and strive with every fiber in your being to avoid being the type of person who rambles on and on with no end in sight, more likely than not causing listeners to sit and think to themselves, Oh my goodness can somebody please make this stop.” 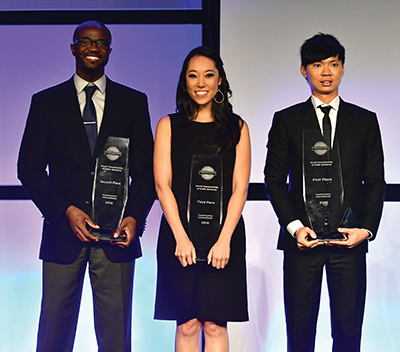 Lee is an entrepreneur from Santa Ana, California (the birthplace of Toastmasters International). Like Tay and Beverly, she mixed humor with dramatic content. Her speech, “I Will Be There,” explored the enduring value of friendship.

Winners of the 2016 Taped Speech Contest (a category for members of undistricted clubs) were also announced at the convention. They are: first place, Komal Shah, CC, CL, of Nairobi, Kenya; second place, Niall A. Finn, ACS, ALB, of Chania, Greece; and third place, Anthony Wangondu, ACB, ALB, of Nairobi, Kenya.

In a telephone interview from Singapore after the convention, Tay said he was still overwhelmed by the whole experience. A member of the Punggol Park Toastmasters club in Singapore, the amiable young champ is also a newly minted lawyer. However, in the wake of winning the speaking title, Tay says he is putting off a career in law to pursue public speaking as a profession.

Growing up speaking a mix of English and Mandarin, Tay joined Toastmasters when he was 20—mostly, he says, to improve his interpersonal skills. He says he has since become much more confident in social situations. 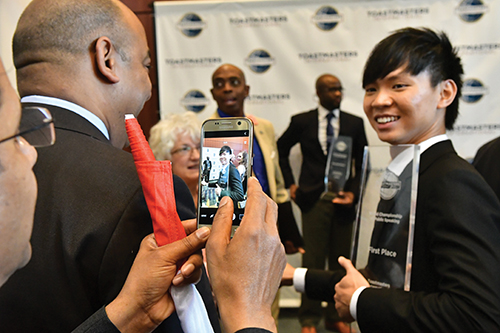 An attendee snaps a photo of the new champion.

As a professional speaker, one of the messages he says he wants to emphasize to audiences is the importance of persistence and self-improvement, using himself as a primary example. This year marked Tay’s fifth time competing in the International Speech Contest; in the previous four competitions, he notes, he had never even come close to winning at the district level.

“But this year I had a lot of determination, grit and perseverance to get to the district final, the semifinals and the finals. I was hesitant in the past. But something changed this year. I wanted to push my limits.”

Tay expanded his boundaries in other ways too: His trip to the International Convention was the first time he had ever traveled to the United States. Before arriving at the convention, he spent a week in San Francisco and several days in Washington, D.C., visiting Toastmasters clubs in the two cities—and practicing his semifinal speech for them. He picked up valuable tips. For example, Tay’s use of the term “tire puncture” fell flat in the U.S. clubs.

Tay drew on his personal experience with bullying for his championship-round speech, titled “Outsmart; Outlast.” When he was 14, he told the audience, he was terrorized by a large teen named Greg, who made him wear his (Greg’s) underwear over his clothes. The bully’s daily taunts and threats were relentless, and they took a heavy toll.

“Have you ever felt so fearful that you could not eat or sleep?” asked Tay. He then described a different kind of bully: the one inside ourselves. The inner voice that tells us we’re not good enough. The best way to deal with that punishing voice and piercing self-doubt is to face—and embrace—our vulnerability, said Tay.

At the end of his speech, he pulled the underwear down and stepped out of it, symbolically removing the self-inflicted shame. As serious as his message was, Tay also lightened the tone by making quips about his frightened young self and tapping into the visual comedy of a man wearing underwear outside of his pants.

Tay’s future is bright and his schedule busy. Besides trying his hand at professional speaking, he will enter the world of academia, teaching public law at a Singapore law school and public speaking at the National University of Singapore. In addition, he runs a public-speaking academy, with a particular focus on helping young people improve their communication skills.

“I was hesitant in the past. But something changed this year. I wanted to push my limits.”

His triumph in the world championship sparked excitement in his young charges. Upon his return to Singapore, several of his 12-year-old students gave him congratulatory gifts. One drew a large picture with the words “The Underwear Hero!”

Tay, who has speaking engagements lined up at Toastmasters events in various countries, says he loves speaking to audiences, which he has been doing since participating in high school debate contests. In a Facebook post after the convention, he expressed gratitude for how the world championship win is changing his life.

“It has opened to me many doors of opportunities to travel around the world to speak,” he wrote, “and to live, eat and breathe my passion.”


Darren Tay delivers his winning speech, “Outsmart; Outlast,” in the 2016 World Championship of Public Speaking.
Aaron Beverly’s speech, which had an ultra-long title, earned him 2nd place in the championship.

Josephine Lee captured 3rd place in the 2016 event with her speech “I Will Be There.”