Four-day celebration of communication and leadership draws a global audience to D.C.

More than 2,000 people from 61 countries attended the 85th annual Toastmasters International Convention to enjoy keynote presentations, learn best practices in communication and leadership, and celebrate a new lineup of leaders. A little more than one-fourth of the attendees—about 530 people—were experiencing their first Toastmasters convention.

Eldonna Lewis Fernandez, ACS, ALB, of Irvine, California, and Darren LaCroix, ATM, of Las Vegas, Nevada, both earned the title of Accredited Speaker, the highest speaking designation that can be achieved in Toastmasters. It represents the mastery of professional speaking techniques. (LaCroix is also the 2001 World Champion of Public Speaking.)

Golden Gavel recipient Tony Buzan, recognized as the creator of Mind Mapping, spoke about this popular technique for improving memory, innovation and thought processes. The British author and 2011 nominee for the Nobel Peace Prize dedicated his speech to Ralph C. Smedley, founder of Toastmasters International, who devoted his life to the organization and its members.

During the Hall of Fame ceremony, 13 Toastmasters districts were recognized as President’s Distinguished. District 92 had the highest percentage of Distinguished clubs in the world. In total, 47 districts earned Distinguished recognition for their efforts to help build and support clubs. 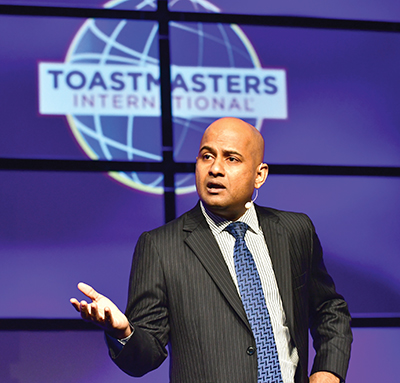 Mike Storkey, DTM, of North Queensland, Australia, was installed as the new International President during the President’s Inauguration. A business trainer and coach, he joined Toastmasters almost 25 years ago and is a member of three clubs.

The five education sessions held at the convention were aimed at helping members improve their leadership, communication and life skills. Here’s a brief overview of the speakers and their sessions:

Manoj Vasudevan, ACS, CL, is the CEO of Thought Expressions based in Singapore. He was also the 2015 third-place winner in the World Championship of Public Speaking®. The leadership coach and multinational management consultant shared leadership lessons and took attendees down the path of how to become leaders who others choose to follow.

Award-winning storyteller Kelly Swanson is a featured entertainer for Holland America cruise lines. She came to D.C. to state her case for how compelling stories trump data. In her interactive session, Swanson illustrated how storytelling creates a memorable connection between speaker and audience.

Anne Barab, DTM, AS, author of the best-selling book The Sooner You Laugh, The Faster You Heal, shared “I Had a Life Plan but the Magnet Fell off the Fridge.” The former CEO of a 1.5 billion mortgage bank spoke about how to retrain the brain to think positively to create health, wealth and happiness.

Sharing insights into the path to professional speaking were Rochelle Rice, CSP, AS, MA, and Sheryl Roush, DTM, AS, PDG. They discussed their experiences in achieving the Accredited Speaker designation.


It’s difficult to imagine how next year’s convention can be much better; but with all of the inspiration shared this year, the planning process for the 2017 convention is off to a great start. Until next time.