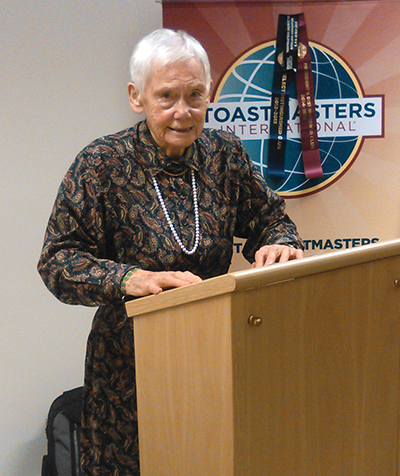 Betty Meyers is proof that it’s never too late to tackle new challenges. She ran marathons in her 70s and 80s, and she joined Toastmasters at age 82. Ten years later she is still thriving. Betty has earned her Advanced Communicator Silver and Competent Leader awards.

At 92, she is a treasure in our club, the Capital Toastmasters in Wellington, New Zealand. Betty’s speeches reflect her wealth of life experience. She keeps members enthralled with her stories of what Wellington was like in the 1930s and during World War II, when she was training to be a nurse. “We looked out at the harbor first thing in the morning, and it was full of warships,” she says. “The U.S. Marines had arrived. They were based in Wellington for final training for the Pacific War.” 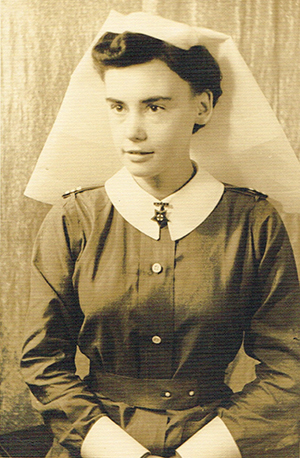 Betty actively participates in all aspects of the Toastmasters program, giving speeches, responding to Table Topics, taking on meeting roles, even competing in speech contests. And the salmon sandwiches she brings for our meeting breaks when she is the sergeant at arms are particularly appreciated.

Betty went to an elite private school in Wellington but left when she was 16 to work at the Bank of New Zealand. One day a bank customer told her he “didn’t think much of her war effort,” which she says struck a nerve. She decided to train as a nurse at the Wellington Hospital. She eventually worked for 25 years there
as a Registered Nurse.

Her husband worked as a town planner and they spent several years living in Singapore and then Hong Kong. She talks about these various adventures in her speeches, along with such topics as healthy eating and the marathons she has run around the world. 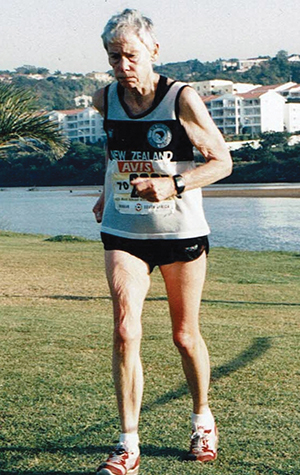 In total, Betty has run 21 marathons and 51 half-marathons. Back when she was a sprightly 72, she represented New Zealand in the Buffalo (New York) International Veterans Marathon, finishing in third place in her age category. She says she would have finished second except that she stopped to talk to someone—a true Toastmaster even back then.

Betty ran her last marathon in 2004, in Honolulu. Fighting injuries and making frequent rest stops in the debilitating heat, she completed the marathon in 14 hours. She finished first in the 75-to-80 age group.

Running is actually what led Betty to Toastmasters. She and I were both serving on the Wellington Marathon Clinic Committee, and one day after a meeting, I gave her a ride home and told her I had to get to my Toastmasters meeting. At the time, I was president of the Capital club. Betty said she would like to go and see what it was all about. That was 10 years ago and she hasn’t looked back since. “Toastmasters gave me a new lease on life,” she says.

These days Betty and I still drive to club meetings together. We live in adjacent suburbs in Wellington and since she can no longer drive, I pick her up and take her to meetings and drive her home afterward. Betty, who has four children, nine grandchildren and three great-grand-children, is also an active member of her church, where she helps with volunteer work.

“Toastmasters gave me a new lease on life.”

Toastmasters is a big part of her life. Betty brings great joy to our club, and she says the feeling is mutual. “Capital Toastmasters is full of very talented people who inspire and motivate me,” she says. “It also has a wide membership from all different cultures—Filipinos, Asians, Canadians, Indians, people from all over the world. I have learned so much from them all. They have transformed my life.”

Rob Julian, DTM is a longtime member of the Capital Toastmasters club in Wellington, New Zealand, and a two-time division governor.