A Voice for the FBI 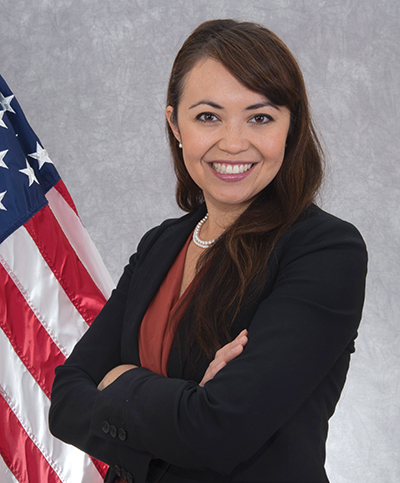 As a spokesperson for the FBI, Ayn Dietrich-Williams speaks to the media on a regular basis. Photo credit: Annette Anderson

Ayn Dietrich-Williams, ACS, like many Toastmasters, has vivid memories of her earliest club meetings—especially her first tentative steps into that nerve-wracking yet stimulating adventure known as Table Topics.

Unlike most Toastmasters, though, she had coloring books and homework sheets by her chair. She was 12.

Her mother, Vellie Dietrich-Hall, ATMS, CL, a founding member of the Bennie Bough Toastmasters club in Springfield, Virginia, just outside the U.S. capital, came to meetings with her young daughter in tow. She believed training in public speaking was foundational to a successful future.

Mom was right. (Aren’t they always?)

Today, at age 33, Dietrich-Williams is an accomplished spokesperson for the U.S. Federal Bureau of Investigation. And she is still an active member of Toastmasters, attending the Downtowners Club in Seattle, Washington. She credits her club with laying the groundwork for her fast-paced career as a media coordinator, which often has her in front of the camera, being grilled by a throng of impatient reporters thrusting their iPhones or other recorders in her direction.

Dietrich-Hall, a one-time radio broadcaster in her native Philippines, still takes a strong interest in her daughter’s career. “My mom has always pushed me in communications,” says Dietrich-Williams, who benefited from internships her mother helped her secure as a teenager, at the Voice of America (the government radio network) and the White House. “Even today, I’ll send her a clip of me on TV and she’ll say something like, ‘You spoke well, but you were wearing all dark clothing. I think you need some color and lipstick.’”

Not that Dietrich-Williams minds the feedback. She is passionate about seeking constructive criticism on her performance from colleagues, family members, fellow Toastmasters—whoever she thinks will have something meaningful to offer.

“I go out of my way to invite nitty gritty feedback. If it’s people at work who are watching me talk about a case we’re involved in, or Toastmasters who are evaluating me, I ask them to not hold back. If a word choice sounded funny, if I spoke too fast or didn’t use pauses—please take off the gloves.” 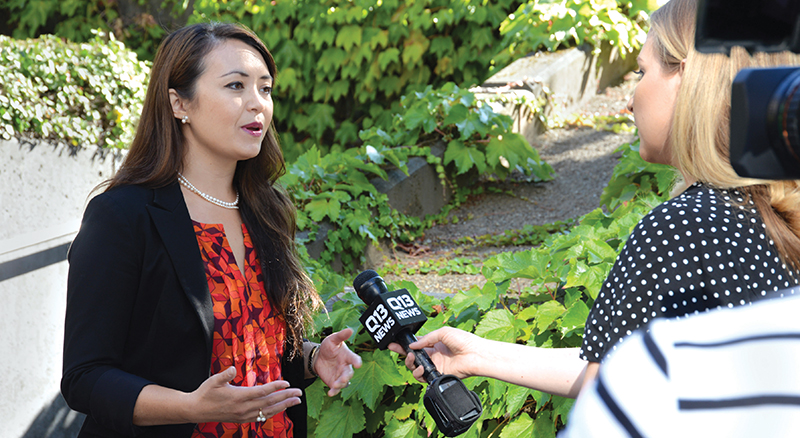 Dietrich-Williams is interviewed for a TV news segment by a reporter in Seattle, Washington. Photo credit: Annette Anderson

The approach has served her well. In the fall of 2015, Dietrich-Williams won first place in the Table Topics Speech Contest in her division, and then second place in District 2. In 2008 and 2009, she represented District 27—in the Washington, D.C., area—in the International Speech Contest semifinals.

Table Topics, in particular, says Dietrich-Williams, has provided rigorous training for those frequent times when she faces unexpected questions. “I’ve done live interviews on TV where the host has said, Here are the general topics I’m going to ask you about, and then they ask me something totally different. It can either be something a bit aggressive, or just something I didn’t prepare for.

“I did one talk show on [the topic of] nicknaming bank robbers. The host asked me what percentage of bank robbers we catch. I didn’t know an exact number, and I’m not going to make one up. So on the spot I came up with something like, ‘We catch a significant number of them, but what’s important to us is that there are still ones that we haven’t caught. And for that reason we rely on the public to work with us.’” 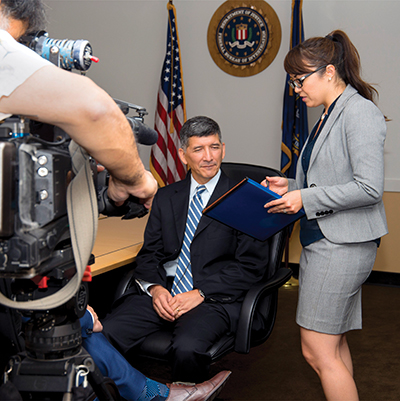 Dietrich-Williams prepares her then-boss, Frank Montoya Jr., head of the FBI’s Seattle office at the time, for an interview with a reporter. Photo credit: Annette Anderson

Dietrich-Williams acquitted herself well in the interview. But watching the clip, she could detect subtle telltale signs that she was caught off-guard. “I probably looked really calm, but I could pick up my little cues. I could tell I was stressed, because I was blinking.”

Moments like those simply motivate her to redouble her training. “That’s why Table Topics is my favorite part of Toastmasters,” she says. “I need this practice over and over again. In my club, when I’m preparing for Table Topics contests, I tell my club members to give me the hardest thing they can think of. I need to re-create that stress.”

When she is not on camera, Dietrich-Williams is often responding to reporters’ queries via phone or email, or writing news releases—perhaps alerting people to a scam targeting the elderly, or seeking tips from the public to help solve a crime. She may also be prepping the FBI regional director or FBI agents for their own media interviews, coaching them on what they can and can’t say, and on what questions to expect and how to respond.

Dietrich-Williams has a methodical, almost scientific approach to communications. In the five years she has been in her current role, she has developed a repertoire of tried-and-true responses she can draw on—for example, at press conferences where reporters are pressing for more details than she is allowed to give. “I’m always writing out my catchphrases for how to answer questions. I now have a set way of answering certain tough questions that tend to reoccur.”

She had 15 minutes in each session to quickly and concisely lay out the latest “intel” on some of the most sensitive and high-profile issues affecting ­Americans’ security.

Likewise, she says that “when something big happens, I brainstorm all the tough questions that can be asked. I write them out and send them with some starter draft language to my colleagues who are the subject-matter experts. Then I really rely on the back-and-forth written communication in the emails.”

She also relies on networking to avoid reinventing the wheel. When faced with an issue for the first time, she’s quick to turn to colleagues for guidance—usually communicators at other FBI field offices who have dealt with similar cases.

She did so in 2014 concerning the heartbreaking case of a 6-year-old missing girl whose body was eventually found. A 17-year-old boy, a neighbor who lived in the same mobile home park, was arrested in the killing. The case was particularly trying for Dietrich-Williams on an emotional level because the girl reminded her of herself when she was that age.

“I’m putting out this picture of a little mixed-race girl with dark bobbed hair and bangs exactly like I had my hair. It felt jarring, as if I were putting out a picture of myself.”

Her counterparts at other FBI field offices helped her craft sensitive language that would be appropriate for the local sheriff who would be speaking to the media. “I think it’s so important to reach out to the resources available to us,” says Dietrich-Williams. “Any time I get a tough topic, like when we found the body of the missing girl, I’m not going to start from scratch. I’m going to reach out to people I think might have best practices they can share with me.” 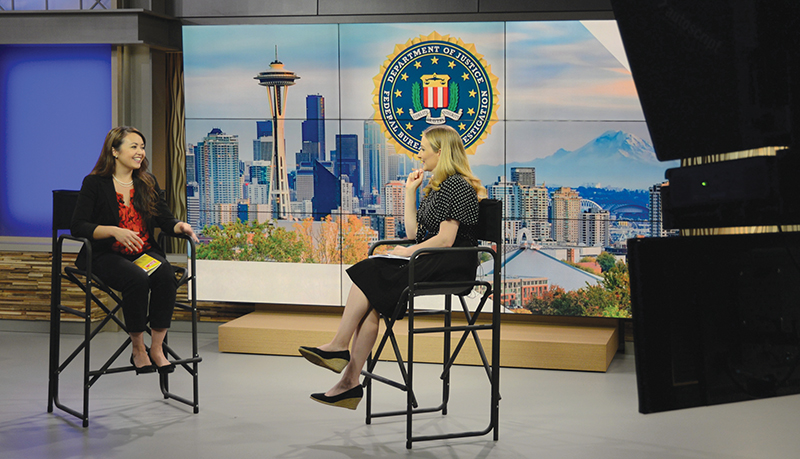 Before she moved to Seattle—to pursue the public affairs specialist job she now has, and to be near the fellow FBI staffer she would eventually marry—Dietrich-Williams dealt with public-speaking stress of a different nature. She was an intelligence analyst at the bureau’s headquarters in Washington, D.C. She gave daily briefings to top law enforcement executives, including the national FBI director and the U.S. attorney general.

“I would stay up all night studying and then meet with a succession of leaders the next morning, starting with our counterterrorism division.” She had 15 minutes in each session to quickly and concisely lay out the latest “intel” on some of the most sensitive and high-profile issues affecting Americans’ security.

Running those meetings, recalls Dietrich-Williams, was a bit like being the Toastmaster of the Day. “I was the one leading it, but everyone else had their role, and I had to get us through the agenda.”

Sometimes, she had to scrap her notes and think on her feet—namely, when the hurried officials she was briefing thought they knew the facts already, but she had to interject with a key update or correction. “I had to get their attention back—that was tricky.”

No problem, though, for an experienced Toastmaster.

“Toastmasters has been a big part of my life,” reflects Dietrich-Williams, “and I proudly tell everyone it has equipped me for my high-visibility, high-pressure job.”