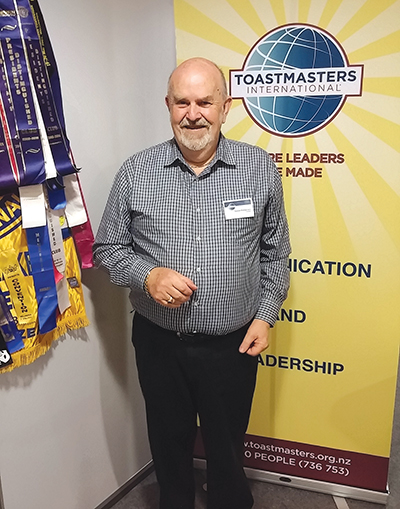 Toastmasters are recognized for their speech evaluation skills, especially when a speech contest is involved. That is certainly the case here in my native New Zealand. If your club is asked to supply judges for a speech contest for adults with special needs, shout out, “I’ll do it!”

On a recent Saturday morning, I had the privilege of helping to judge such an event, one that was masterfully organized by the local Rotary club. (Rotary International tackles humanitarian challenges around the world.) The judges were tasked with selecting three speakers—out of 12—to advance to the national contest final.

The speakers ranged in age from late teens to their 30s, each with their own mental or physical difficulties to overcome. That they were able to overcome those challenges and bravely step up to a speaking platform to address strangers on the topic “What I believe my future will be” represented for me the most emotional and difficult judging role I have ever undertaken. It was also the most humbling, heartwarming and inspirational contest I have ever enjoyed!

Not one to typically show great emotion, I teared up regularly as I listened to the speakers that morning—they were full of pride (in their families, helpers, friends and achievements), hopes for the future (job prospects, travel and romance), humor (one young lady used binoculars to look into her future and fancied Prince Harry as her boyfriend and Buckingham Palace as her home of choice), and a belief that for them anything was possible.

They did not ignore their difficulties; most of them addressed their problems in their speeches. One young woman casually mentioned, “I’ve not had an easy life,” a considerable under-statement from someone with special needs who was an orphan before she was 12. After the loss of her parents she went to live with her uncle and aunt, who stepped up to help.

But her aunt and uncle weren’t the only ones. Each speaker had a support team. Parents, siblings, relatives and friends cheered them on and made it possible for them to participate in the contest. One caretaker had brought a speaker (a young man) by bus, then train and then bus again, a 33-kilometer trek (more than 20 miles) in the rain—all because her car had broken down and she believed that “he deserved the chance.”

I was in a room full of good people doing good things. But as a judge, I was concerned I would be considered a villain by the end of the contest. However, that characterization fell upon the timekeeper that day. Unlike in a Toastmasters speech contest, where lights are used to make speakers aware of the time left in their speech, the timer at this contest rang a bell for each speaker after five minutes, and each time she suffered the glare of a roomful of absorbed listeners unhappy about the disruption.

As for the judges, we felt fully tested when the time came to pick the winners. In our eyes, each speaker was a winner just for having stood on the podium. In this contest we virtually had an across-the-field blanket finish. Our job was made even tougher by not knowing the full impact of each speaker’s difficulty and how that factored in. The point system we used to judge the event was devised by the senior judges from previous contests for special-needs adults—it was based on the heart.

We were in accord on a number of speakers just edging out the others, allowing us to present the names of three people who would receive prizes and advance to the contest final. Unlike the acrimony and disappointment that usually follows the announcement of contest winners, these speakers gave us one last inspirational surprise. Those who did not place responded to each winner’s name with the sort of joy that you and I might show only if it were our name being called out. They showed no envy or malice, and instead shared in the pleasure of the three who proceeded to the next stage.

It was a day filled with emotion, challenges and, above all, inspiration.

Darrell Phillips, ACG is a member of the Spinnaker Toastmasters club in Porirua City, New Zealand.