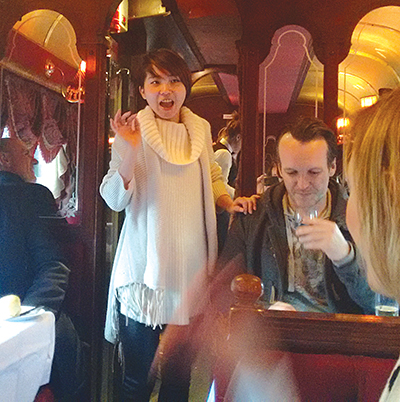 Carlton Toastmasters club in Melbourne, Australia, recently held a special meeting on a tram. Trams have long been an iconic part of the Melbourne landscape, and a number of them dating back to the 1940s are now used as moving restaurants.

Speeches by club members included a dramatic piece reflecting the era, as well as one about the “connies”—tram conductors—who used to ride the rails before the advent of modern transport passes. The Table Topics session revolved around the joys and hazards of public transport.

Speakers had to deal with the constant sway and roll of the tram as it rattled through the streets of inner-city Melbourne. It was a test of vocal projection (making oneself heard over the dinging of the tram), body language (holding on so as to not fall into anyone’s lap) and using the stage—the aisle, that is—so as to address the whole audience.

The two-hour meeting proved to be a rocky ride, but that made it all the more fun as well as a fantastic learning experience.