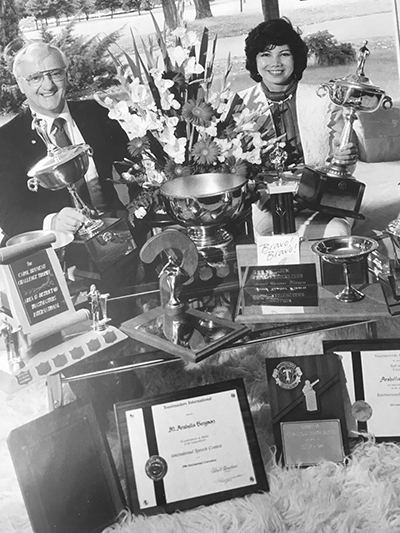 Arabella Bengson poses in 1986 with her former mentor and life partner Fraser McAllan and her Toastmasters awards.

She’s as comfortable onstage speaking as she is graceful on her feet dancing. At 72 years old, Arabella Bengson, CTM, is semiretired, but she leads a busy life as an international speaker, coach, ballroom dancer and active Toastmaster.

In 1986, Bengson became Toastmasters International’s third woman to win the World Championship of Public Speaking®—an accomplishment that she says opened many doors.

She joined Toastmasters in 1983 at the suggestion of a co-worker who had commented on her shyness. She never imagined that decision would lead her to the enriching career and stimulating life she lives today.

Bengson has served as vice president education, club president and area governor in District 60. She is now an active member of 60 Minutes Club and vice president public relations of Mid-Island Advanced Toastmasters club in District 21 in British Columbia, Canada.

What’s it like to be one of four women to win the title of World Champion of Public Speaking?

I didn’t realize until later that since Toastmasters’ first official World Championship of Public Speaking in 1938, I was only the third woman to have won by 1986. [Women weren’t eligible to compete in the event until 1973, the year that women were officially allowed to become members of Toastmasters.]  The fourth woman [LaShunda Rundles] won 22 years after me. Some Toastmasters asked if I thought there was systemic discrimination against women. I honestly told them I did not think so.

“The triumph is not in the trophy—it is in the striving to do our best.”

I was fairly “green” when I won. I did not know any better than to work my hardest, as I did with everything in my life that was worth doing. I felt just being part of the journey was a blessing, win or lose. I enjoyed the challenge, the discipline, the whole process.

I did not presume to win, but I did visualize that the trophy was big and that I had to carry an empty suitcase to bring it back home.

What was the title of your winning speech and why do you think it was well received?

My speech was called “We Can Be Pygmalion.” Like the story of Pygmalion [a figure in Greek mythology], who created a most life-like and beautiful statue, and breathed life into it through his caring, I think the universal message of my speech made it so well received: “When we believe in others, and expect the best of them, they often exceed our expectations.”

This was what the Harvard Business Review termed “the Pygmalion Effect.” It was a term very familiar to me, having completed a master’s degree in psychology. The examples I used in my speech included classic and popular literature, scientific data and my own experiences.

It took me a month to craft the last paragraph of my speech. I practiced so much that the speech became a part of me—the speech and I were one. I’ve always thought that when I do my best, I win, no matter how the judges vote.

I was asked to speak at different departments in my company, Bell Canada [a telecommunications company], and for many outside corporations and national and international organizations.  At this point, a Distinguished Toastmaster from Canada, Fraser McAllan—my coach, mentor and “tormentor” (because he gave me so much constructive feedback along with creative and caring coaching)—became my life partner. 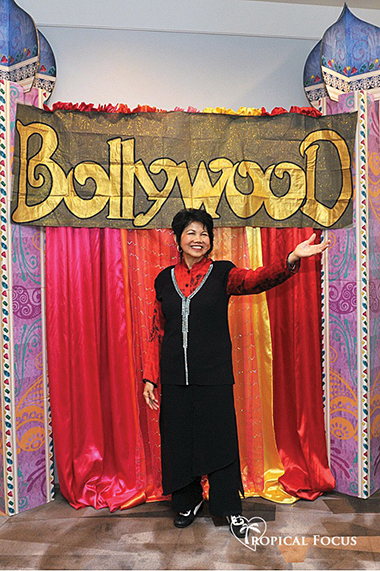 Bengson gives a presentation in May at a District 48 conference in Tampa, Florida.

Soon after that, he and I won a bid to train managers of the Ontario government in public speaking. It was a great triumph both psychologically and financially. Fraser took early retirement from Chrysler Canada, and I resigned my managerial post with Bell. We had a satisfying professional speaking career, and I became the first woman president of the Ontario Speakers Association, which later became the Canadian Association of Professional Speakers. Many doors were opened to us, including speaking engagements in North America and Southeast Asia.

What kinds of speeches and presentations have you given?

I have given keynote addresses and workshops at Toastmasters district and region levels, the International Convention, at conventions of training organizations, and different Canadian conventions for nurses, nutritionists, lawyers, bankers and universities, to name but a few.

Some of my topics include “Brain Boosts for Fun and Practice,” “Present with Fun and Power!,” “Design Your Destiny,” “Weave a Little Magic with Stories” and others that I have tailor-made for specific organizations. The biggest audience I had was at a Toastmasters International conference with 1,800 attendees.

Fun is a critical component of my speaking style. Many times, my partner Fraser, who is now passed on, team-taught with me …We included visuals, songs, dance, poetry, lights, props, music, movement, et cetera, to liven up the presentation.

Tell us about your speech coaching.

I was so blessed to have been coached by one of the best—Fraser, whose insightful, creative and extremely effective coaching was the most memorable part of my learning process.

When I was competing, I invited other astute Toastmasters for coaching sessions at my home or in special sessions at different clubs. Because of this experience, coaching others became a very significant and satisfying part of my professional career. Even my keynotes are interactive presentations, and many of my workshops include coaching participants.

The youngest person I’ve coached was 9 years old, and the oldest was 87. In between there were educators, financial counselors and speech contestants. The biggest benefit for me is seeing how the speaker progresses from nervous and hesitant to confident and skillful. I coached many who were already highly skilled, and they readily implemented my suggestions when I explained, “Even a diamond needs to be cut and polished to show their brilliance.” What absolute joy for me to help release that brilliance!

Bengson dances with Ernie Bayley at a local community event.

When did you take up ballroom dancing?

It was great when I took long cruises on Cunard’s Queen Elizabeth and Queen Mary. Though I did not have a partner with me, I was able to follow the dance hosts whether it was American or international style. And I love the Argentine tango too!

What other special interests do you have?

I have recently taken up dragon boating, and what a joy that is to be out in the ocean, with about 18 paddlers, paddling to the rhythm of a drum on our pristine British Columbia waters.

What is the biggest lesson you’ve taken away from Toastmasters?

The lesson that most champions get to learn: There is no finish line. Each moment is a progression, and the journey needs to be celebrated—not just the destination. The triumph is not in the trophy—it is in the striving to do our best. What talents we are given, what skills we learn, we must now pass on to others. And when we help others achieve, we truly succeed. I am deeply grateful for being able to teach, engage, challenge and inspire—this is the privilege of the platform.