In 1944, an unassuming girl from Transylvania began the simple task of recording her thoughts in a diary while hiding in Budapest after fleeing the Nazis during World War II.

Julie Kertesz’s diary entries as a 10-year-old have served as a roadmap for her storytelling 70 years later.

Kertesz, DTM, is an effervescent Toastmaster who uses her intriguing past and honest humor to engage audiences all over Europe, especially in London. Kertesz initially found Toastmasters in 1977 while living in the United States, and with typical candor she admits her reason for joining.

“Should I confess? I was just divorced and working in America, and I wanted to find a place with more men than women!” Kertesz says. “Did I find ‘my man’ at a Toastmasters club? No, I’m still looking. But I found my voice!”

She performs stand-up comedy, teaches a storytelling workshop, attends meetings at the Lewisham Speakers Club in London and writes blogs. Every few decades she’s encountered major changes in her life, but she’s learned to make the best out of any situation and finds humor in everything.

“I had never even heard of stand-up comedy until age 77 and it was only then that I learned we all have funny bones—we just have to cultivate them.”

For 35 years, Kertesz called Paris, France, her home. During that time she worked as a chemist and later as a researcher while studying for a doctorate in chemistry. Life had thrown her a curveball, however, and after her marriage ended, she took her two children and her Ph.D. to the U.S.

“For a long time I asked myself who am I? I felt like a fish out of water,” Kertesz admits. But then, after living near Washington, D.C., for three years, she felt welcomed, especially after discovering her first club, Monument Toastmasters in Silver Springs, Maryland.

Kertesz worked as a visiting fellow at The National Institute of Health in Bethesda, Maryland. But without U.S. citizenship, she could only stay for a limited time under her work contract, so she packed up her life again and returned to France. But finding a research chemist position at that point in her life proved impossible. After being told that she was too old, she was forced to change professions.

In 1981, at the humble beginnings of personal computers, Kertesz developed an interest and started a company that distributed American computer products in France. She even had the privilege of meeting computer industry pioneers Steve Jobs, Steve Wozniak and Bill Atkinson.

“I liked being a chemist, but I loved working with personal computers,” Kertesz says. “I never even dreamed I’d be a computer company founder and buyer/seller, but I discovered with delight when approaching age 46 that I had it in me.”

When Kertesz turned 60, she retired from her computer career and began to read through her 50 years’ worth of diary entries. She started saving them as digital files to share with her children, but in doing so she realized that others may be interested in her stories, so she published them. Soon, her blog was up and running.

Written in French, the diaries reveal her authenticity starting with entries from 1944. During that time, Kertesz and her family, who were Christian but of Jewish origin, were living in hiding under the steps of a coal cellar in Budapest. This is an entry from December 25, 1944:

“Yesterday we celebrated Christmas. I am filled with happiness! Yet there is a war. We have fir branches hanging from the ceiling, we decorated them and added candy. I received so many gifts! ... For two days we hear the roar of guns so strong that even mom heard them, at least the most violent … A small bomb fell outside the church of St. Apostles (but no one died).”

While she enjoyed writing and sharing her stories, Kertesz also discovered photography at age 70 and joined the popular website Flickr, where she posts images for public viewing. Her photography consists of nature shots, portraits of strangers, places where she travels and more. Sixty thousand photos later, Kertesz is still posting every day. Her photos have surpassed 10 million views from people all over the world.

In another change of events, in 2008 Kertesz moved to London, England. Although linked to millions of people through her blog and photography, she again felt disconnected in her new city. But after a short time she found her way back to Toastmasters and joined two clubs, as well as participated in Spark London events (Britain’s first true storytelling initiative), where she performed before a paying audience. After earning her Competent Communicator, she started a blog in English where she offers advice and videos.

“Coming to London, I wanted to find like-minded people and tell my stories,” Kertesz says. “I had finally found my tribe at Toastmasters.”

In her late 70s, Kertesz stepped out of her comfort zone and dipped her toe into the pool of stand-up comedy.

Sporting short white hair and well-earned wrinkles, Kertesz admits she may give off a “grandma” vibe when strolling onto a stage at the comedy clubs. But audiences learn quickly not to judge her by appearance alone. Her stand-up act includes allusive jokes about her love life and some self-deprecating humor about her age, with four-letter words sprinkled in, despite her daughter’s advice. In this case, the grandmother of five uses her geriatric status as an advantage to conjure laughter.

“I had never even heard of stand-up comedy until age 77, and it was only then that I learned we all have funny bones—we just have to cultivate them,” Kertesz says. “I believed for so long that I was not funny. But we develop, with time, a ‘comedian’s eye,’ looking at all our problems and learning how to present them so others will laugh with us.” 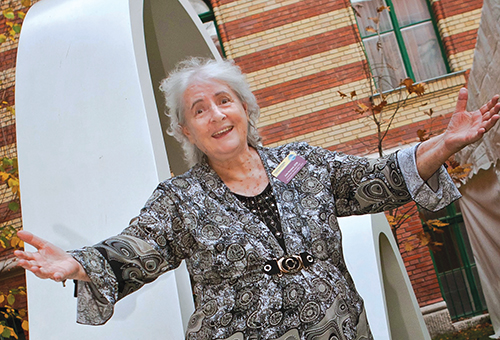 Kertesz poses for a newspaper photographer while in Budapest where she participated in the Continental Europe Toastmasters Laugh and Learn conference in 2013.

Kertesz now incorporates elements of what she’s learned onstage back at her Toastmasters clubs, or while giving speeches as an Ambassador for Toastmasters’ revitalized education program (REP). She also saw the fruits of her labor recently when she was invited to Tallinn, Estonia, to give a workshop on “Funny Bones” to two Nordic Toastmasters divisions.

“Speaking from the inside connects us to any audience,” Kertesz says. “I learned to connect with a young audience as a stand-up comedian and with a middle-aged crowd as a personal storyteller.”

She especially bonds with her audience when she performs her personal story titled “When I was 10, the War Caught Up With Me.” Click here to watch a video of it.

These days Kertesz, who turns 82 in July, spends time on her Kindle reading romance novels, scrolling through Facebook and adding to her Flickr photo account. Since she is tech savvy, she was an early adopter to meeting online with a group of advanced Toastmasters from around the world. That group chartered in March 2016 as the Firebirds Collective club.

“I learned through my online meetings that we can get to know each other even better through the web, and in a fun environment like that we learn a lot from one another.”

So what’s Kertesz’s next adventure?

“I hope to give more workshops, visit my clubs often as an REP Ambassador and create a storytelling club for Toastmasters of different continents,” she says.

Kertesz has come a long way since fleeing her home in the midst of the Second World War. A young girl, quietly writing in her diary, would have been surprised to know how those entries would impact people in other countries 70 years later.