Capitalizing on a Capital Setting 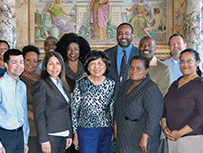 The Library of Congress Toastmasters Club

That’s right. United States’ capital—the site of the Toastmasters International Convention in August—is bustling with Toastmasters clubs, many hosted by federal agencies or other U.S. government bodies. More than 60 such clubs exist in and around D.C. The host organizations range from iconic institutions such as the FBI, Senate, Smithsonian and Treasury to lesser-known ones such as the Defense Intelligence Agency and the U.S. Securities and Exchange Commission.

For many of the government employees who attend these clubs, Toastmasters and public service go hand in hand. Iris Taylor, DTM, a senior cataloging specialist at the Library of Congress—the world’s largest library, and a popular D.C. tourist stop—is president of the club that meets there every two weeks. She says she uses Toastmasters values as a guide for her work as a public servant. This means providing service to others with “respect, integrity and excellence,” she says.

Some government-based clubs, like Taylor’s, meet in stately settings with grand marble architecture and large murals on the walls. Kevin Breckenridge, CC, serves as vice president public relations for the Capitol Hill Toastmasters.

“The fact that we are located in the nation’s capital is appealing enough, but more than that, we are actually located in the U.S. House of Representatives,” he says.

The Cannon House Office Building, where the club meets, is the oldest congressional office building. It was completed in 1908 and reflects the heavily ornamental Beaux-Arts style of architecture, seen in many federal structures in D.C. Some of the surrounding buildings on Capitol Hill date back to colonial times.

“The location itself is inspiring, and drenched in history,” says Breckenridge. “Just the thought of being in one of the most powerful buildings in the world really gives you a sense of pride, and a call to duty to perform your best each time you enter the building.”

Breckenridge himself is not a public employee but a real estate entrepreneur. His club, like most others at government institutions, welcomes outsiders, either from neighboring agencies or the community at large. Typically, though, visitors who are not on-site employees will have to go through strict security checkpoints, similar to those at airports. In some cases, an escort is required.

Other government-based clubs meet in less majestic surroundings—run-of-the-mill conference rooms, in some cases at satellite offices a few blocks from agency headquarters.

In either case, U.S. government institutions do not officially sponsor or oversee the Toastmasters clubs that meet on their premises. But the U.S. Office of Personnel Management (OPM), which sets human resources policy for federal agencies, does support Toastmasters as a valuable source of low-cost employee training. In a 2014 letter to Toastmasters Chief Executive Officer Daniel Rex, the then-director of the OPM described the agency’s “continuing recognition of Toastmasters International’s contributions and history of service to Federal employees.” The letter goes on to say that “OPM itself has its own Toastmasters Club which holds periodic on-site meetings. Our Club has helped to promote an organizational culture of continuous learning and an environment for professional growth for all employees.”

Whether they work in public service or other arenas, Toastmasters in the U.S. capital seem to draw extra drive and inspiration from their unique setting.

The OPM endorsement holds sway at individual federal agencies. By and large, managers are happy to send their employees to Toastmasters to build communication and leadership skills. Bruce Jones, ACB, CL, president of the VA [Department of Veterans Affairs] Gavaliers club, says Toastmasters has boosted his ability to present at national meetings. He’s chaired two recent national conferences for his agency—a role that involved his speaking from the podium.

Other federal Toastmasters strike a similar theme. Taylor, of the Library of Congress, says Toastmasters has been a boon to her career. “I am able to train new staff, give presentations, chair several positions in different organizations and express myself regardless of the opinions of others,” she says.

Exodie Roe, CC, president of the Capitol Hill Toastmasters, says that “serving in several different leadership positions in the club has enhanced my overall leadership ability, professionally and personally. I’ve learned to delegate assignments more effectively and better manage a team.” In his job on the Hill, Roe drafts bills and provides policy analysis to a congressman. He also writes speeches that are delivered on the floor of the House of Representatives.

Fred Drayton, with the U.S. Department of Labor, says Toastmasters has helped him give speeches all over the nation on behalf of the agency. His club is called the BeLaborers Toastmasters—somewhat ironically, since members, of course, are not encouraged to belabor their topics when speaking.

A handful of other federal-agency clubs have clever names as well. The club at the Department of Homeland Security chose one that is a play on the department’s trademarked slogan, “If you see something, say something,” familiar to Americans from countless public service announcements. The club’s name is “See Something, Say Something … Better.”

Drayton, a founding member of the BeLaborers, proudly points to its niche in the annals of Toastmasters history. Back when the club was attempting to charter, women were not yet allowed formal admission to Toastmasters. Drayton sent a petition to Toastmasters World Headquarters in 1972 and received a letter back from then-Executive Director Robert “Buck” Engle notifying him that the organization would be allowing female members. “We believe our club was the first in the world to be chartered with females as members,” he says. The letter from Engle, adds Drayton, “is posted on the wall back in the stacks in the Department of Labor library.” The issue of equal rights is close to Drayton’s heart: He was director of civil rights for his agency from 1975 to 1983.

Other government-based clubs have their own claims to fame. The Capitol Hill Toastmasters, for example, count among their alumni the host of the American TV talk show Hardball with Chris Matthews. Matthews started his D.C. career as a member of the U.S. Capitol Police and went on to become chief of staff for Speaker of the House Tip O’Neill during the administration of President Ronald Reagan.

In a 2008 Toastmaster magazine article, Matthews said he joined the Capitol Hill club because “I desperately needed to overcome my stage fright. I couldn’t sleep at night. Whenever I had to speak publicly, it got to me.” Participating in Toastmasters changed his mindset, he said. “As a speaker, you have to know that there are people out there rooting for you—more than you might believe.”

Most current members in the Capitol Hill club work as aides for members of the U.S. Congress, says club president Roe. And while no Congress members belong to the club, they are supportive of the group, he says.

Capitol Hill is also home to the U.S. Senate Toastmasters club. Founded in 1972, the club’s membership includes employees of the U.S. Senate. Club meetings often take place in the elegant Russell Senate Office Building, across the street from the U.S. Capitol Building.

Whether they work in public service per se or other arenas, Toastmasters in the U.S. capital seem to draw extra drive and inspiration from their unique setting. Breckenridge says his participation in the Capitol Hill club—including taking part in speech contests—has boosted his confidence and leadership skills, as well as increased his motivation and ability to succeed in real estate.

And while he is a private entrepreneur, Breckenridge also considers himself a public servant—as should any Toastmaster.

“I’ve developed a sense of value about what I have to say. That in turn has led to several outside speaking opportunities where I’ve had the opportunity to serve the public good through my thoughts and ideas.”