Performing stand-up comedy was at the top of mine. 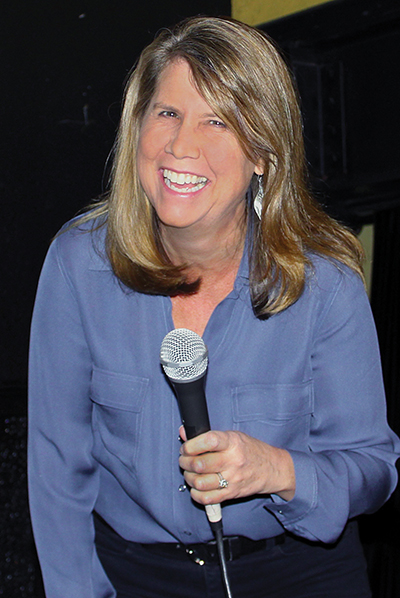 These days almost everyone has a bucket list; a list of things you want to do before you die or “kick the bucket.” My number one goal has always been to do stand-up comedy. I’ve never shared this with anyone because I believed that would jinx it.

After I published my book, Are You Kidding Me? My Life With an Extremely Loud Family, Bathroom Calamities, and Crazy Relatives, I received invitations to four speaking engagements, including one paid opportunity. I knew that to promote my book, these types of events came with the territory. Yet the thought of speaking in front of a group made me as nervous as a pig at a barbeque.

Until now, the mighty pen had been my mouthpiece. I expressed myself through my blog, Facebook and humorous short stories. Face-to-face communication was not for me.

Then everything changed. After I announced my speaking gigs to my friend in a writing class, she said, “You know, if people are going to start paying you to present at book fairs and such, you’ll need to be more polished. Have you ever considered Toastmasters?”

In July, I attended my first meeting of the Afternoon TeleTalkers in San Ramon, California. I even participated in Table Topics. I was shocked when the Ah-Counter reported my 15 “ahs.” I had work to do.

At the end of the meeting, the Toastmaster approached me. “What did you think about our meeting?” I said that I felt welcomed and appreciated the club members’ professional manner. I would definitely be back.

Since then, I’ve held every role in the club, from speaker to Toastmaster. Within six weeks, I was able to weave humor into each presentation and stop using notes. “Ahs” were a thing of the past. After 12 weeks, I represented my club at the area level of District 57’s 2015 Humorous Speech Contest. I placed second and my confidence soared.

When I told my club members about my goal to perform stand-up, they rallied behind me. I found a local comedy club that holds open mic nights. Then I started preparing. The time it took to write, rewrite, rehearse and polish a 3 ½-minute routine was more than I anticipated, but as I searched for my comedic voice I decided on storytelling, using material from my book. I hyper-analyzed each word and whittled down each joke. I paid careful attention to the set-up and punchline rhythm.

I performed my set for the club at the next meeting. Their critique helped me make necessary adjustments and convinced me I could be laugh-out-loud funny.

Then I signed up to perform at an open mic night at a local comedy club. I asked the club manager, “What do I need to do to be successful?” She said, “Bring your friends.”

Thirty comics debuted and only three were women. I chose to perform in the seventh slot. As my turn approached, my legs quaked at the prospect of getting onstage. But my slot came and went. Wait a minute. I was supposed to be seventh. I realized that since my big crowd filled the club, the organizers wanted me to wait longer, fearing that once I finished my set, my friends would leave. Soon, frustration replaced nervousness. Get me onstage.

Finally, I performed my set. And then it happened. I won best comic at open mic night with the help of more than 70 friends and family members. After hours of practice, I was prepared and delivered my routine with the appropriate pauses to evoke laughter. Eye contact, facial expressions and arm gestures were spot-on. The friendly Toastmasters in the audience gave me the support and reassurance I needed.

What’s on your bucket list? After joining Toastmasters, you may be closer than you realize to making a dream a reality.

Stacey Gustafson is a member of the Afternoon TeleTalkers Toastmasters club in San Ramon, California. Her book, Are You Kidding Me? My Life With an Extremely Loud Family, Bathroom Calamities, and Crazy Relatives, was a No. 1 Amazon best-seller in parenting, family humor and motherhood. Learn more at www.StaceyGustafson.com.