Popular podcaster distills the art and science of presentations. 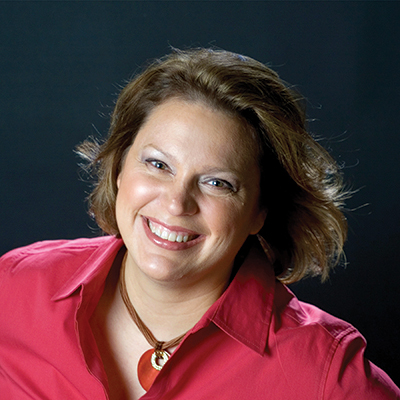 Few people think as deeply about the art and science of communication as Lisa B. Marshall does.

But the popular podcaster, blogger, author, presenter and consultant is no ivory-tower academic. Marshall boils it all down for the rest of us in plain English. She distills the scientifically tested theories of Ph.D.s writing in esoteric journals into evidence-based tips that people can use every day in the workplace and any other place they communicate.

Her podcast The Public Speaker has earned more than 17 million downloads since its debut in 2008. A podcast series she started more recently, in 2013, Smart Talk, features “Inspiring Conversations with Exceptional People.”

“There are so many different areas, and it’s a challenge to keep up with all the latest ideas,” says Marshall. “That’s one of the reasons I do my Smart Talk podcast. I usually interview academics, primarily people who have new books out in the areas I’m interested in. So that way I keep up and I build my network. It’s a win for my audience, but also for me.”

One customer review on iTunes said the series is “highly recommended for improving communication and leadership skills.”


Tell us about your Toastmasters background.

I started in Toastmasters when I was 18. I felt the ability to communicate effectively was important, and I thought Toastmasters was a great place to learn how to do that. The club where I got my start, and which I still consider my home club, is Camden County Toastmasters in Haddonfield, New Jersey. I was also active in the Silver Tongues Toastmasters club, in Burlington, New Jersey. Later on I moved to New York and was quite active in the Schenectady and Albany, New York, areas.


What do you see as the foundation of good communication, regardless of the setting?

My tagline for many years was “helping individuals and organizations to be clear, concise, compelling communicators.” For me, these three terms—clear, concise, compelling—are the overarching principles no matter what the context, personal or professional. We need to use language that is understood by the receiver and that delivers a specific, organized message in a way that resonates with and positively influences the receiver. There are many rules you can follow to become clear, concise and compelling, and those rules apply whether you’re in a personal or professional setting.


To focus on one of these aspects, what is one way to become a more compelling communicator?

When you want to be compelling, when you want to persuade someone, you need the heart and the head. The head is statistics, facts, data. The heart is stories, emotion. Some people are really strong on telling the emotion, but they don’t include the facts and the figures. Others are really strong on facts and figures but have no space for the story. When you combine the two, that’s what the research says is most effective.

“When our stories resonate with someone else, when someone can put themselves in our shoes, that’s when we’re most influential.”

Telling our stories is especially important. We are in the best position to influence people when they know and like us, and share similar objectives. We achieve that by sharing our stories. When our stories resonate with someone else, when someone can put themselves in our shoes, that’s when we’re most influential. You first must build that relationship—and that includes telling your stories.

Advertising offers good examples of this. There was an extremely successful Volkswagen ad that ran during the Super Bowl in 2011. It included no words, just music, and showed a kid dressed up like Darth Vader from Star Wars, running around the house trying to use “the force” to turn on things. Then he’s outside trying to start the car, and the dad, looking out from the kitchen, uses the remote to start it. The kid gets all excited, thinking it was “the force.” In this ad, there were no facts, no talk about the car’s features. It wasn’t even so much about the car at all. It was purely a story about a kid and a family. But the company knew this would be effective. In terms of viral appeal, the ad went up on YouTube a few days before the Super Bowl, and it had more than 12 million views before the game even started. In terms of sales, it’s been reported that the campaign helped Volkswagen to exceed the original launch target by 22 percent.


What are some of the topics you get asked about most often?

The number one question I get on The Public Speaker is “How do I introduce myself?”—whether in a social setting, at work or in a job interview. It comes mainly from young people. With texting and Facebook, there’s no preamble. It’s just the task, the transaction. A young man goes to pick up his girlfriend—he doesn’t have to go inside and meet the dad anymore. He just texts “I’m here” and the girl runs out the front door. 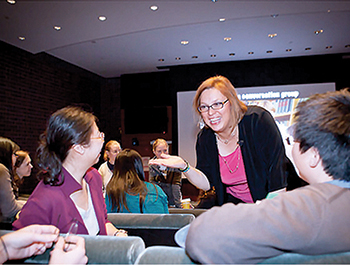 A workshop leader for more than a decade, Marshall helps organizations with teambuilding, conflict resolution, messaging and delivering better presentations.

The second most downloaded piece was on “small talk.” People say, “I’m uncomfortable with it,” or “I’m introverted,” or “I don’t like small talk.” However, it turns out the research shows people feel better after they have small talk, after they have some engagement with those around them. We’re built for that. And it actually serves an important function: Small talk is what leads to significant talk. It’s what helps us say, I’m open, I’m here to listen, and I want to be part of your conversation. That’s the purpose. A lot of people say, “I don’t like small talk because it’s plastic, it’s fake.” But it’s not the actual words that are important. This communication is about stating that you’re open to building a relationship with the other person.


Besides joining Toastmasters, how can people become more aware of how they communicate?

Very often, people think they’re good communicators, but they realize when they run into trouble that maybe they’re not. It takes time, as we see the reactions of others and get their feedback. Eventually, we become more aware of our effective and ineffective behaviors. But we can speed up the process. One tool I was introduced to years ago and still use today with clients is the DISC Index. You take a 10-minute quiz and get a 22-page report that tells you what your dominant communication style is, and what it is when you’re under stress. I’ve set up a special page on my website so Toastmaster readers can do the test for free. It’s helpful for both professional and personal communication. It’s a way to understand what your style is and to use it to your full advantage.