Skip to main content
In 1998, Albert Frantz, ACB, CL, became the first pianist to be awarded a Fulbright Fellowship to study in Vienna in nearly a decade. Today he performs and speaks at TED Talks throughout the world. Photo credit: Vytas Neviera

Albert Frantz exudes a polished stage presence as both a distinguished classical pianist and speaker. Born in the United States, he now resides in music-rich Vienna. Frantz's debut CD in 2012 was an official jury nomination for the German Record Critics Award, among the most distinguished honors in the music industry. He has also released two CDs since that time, both of music by Franz Liszt. Yet the road to success for the pianist has been filled with adversity every step of the way.

Start with the fact that, when Frantz was a child, his piano teacher said he’d never be able to play (telling his parents they shouldn’t waste their money on lessons). His parents didn’t show any faith either—Frantz says his father disdained classical music for being “elitist” and his mother accused him of wasting his brain.

The wounds weren’t just emotional. Frantz suffered daunting physical setbacks: He experienced severe spinal pain as a young man, preventing him from playing for a number of years. A few years ago, he was hit by a speeding tram in Vienna, resulting in a broken wrist—a devastating injury for a pianist. In each case, he found a way to forge ahead, undeterred by the string of roadblocks.

His ultimate success reflects a timeless lesson: Perseverance pays off.

Frantz has learned to embrace his challenges, saying dreams are where inspiration and fear intersect. “I discovered that you can have total uncertainty in the external world, but if in your internal world you have total certainty, you will find a way.”

He references life obstacles and how they strengthen and shape us. “Breaking my wrist thus became my breakthrough,” which, he says, inspired him to learn a challenging musical score written for only one hand.

Frantz grew up in the suburbs of Philadelphia and Pittsburgh. He describes himself in those years as socially awkward and clumsy. He favored science over the arts but fell in love with classical music at age 17; however, his father forbade him from practicing at home and eventually sold the piano outright. 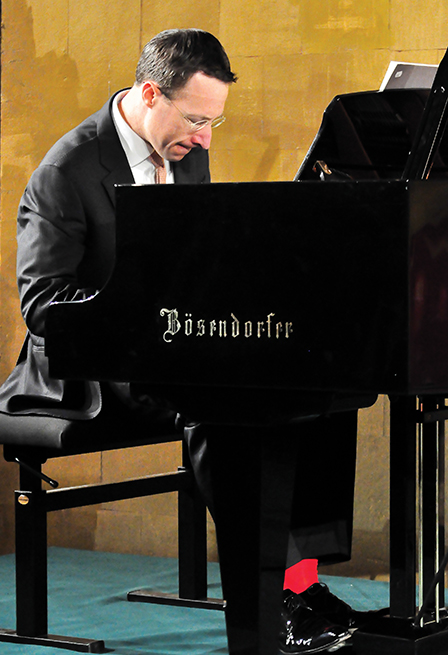 Undeterred, Frantz practiced on the pianos in school and in the library. Within months he learned to play George Gershwin’s “Rhapsody in Blue,” not a piano score for beginners, he was told. Less than a year later, excited and nervous, he played it for his first onstage performance at his high school auditorium for classmates and their families and remembers the sheer joy and thrill of sharing the music he loved.

It was after this performance—and standing ovation—that he became self-conscious about his lack of experience. Others started at age 3 or 4 and were groomed “just like kids who want to become professional ballet dancers,” Frantz says. “By the time I started playing, people my age had been performing for years and were already participating in international competitions.” But it was the emotion he felt, and the desire to share, that pushed him forward.

Frantz continued on the path, focusing on solidifying what he calls “the essentials of musicianship,” including technique and listening skills. He won local, state and national piano competitions, graduated from Penn State University (where studies in music and philosophy trumped his earlier engineering major), and in 1998 became the first pianist to be awarded a Fulbright Fellowship to study in Vienna in nearly a decade.

The language barrier for Frantz was one of the many challenges of moving to a new country. When he first arrived, he jokes, his German was so rudimentary that he couldn’t say his own name for the better part of a year. He took a language crash course, but it wasn’t until 18 months after his arrival that he became fluent.

“There was this long gestation period, and then everything clicked and I could suddenly speak German,” he says. He compares it to the process of learning any skill and remembers the wise words the renowned pianist Hélène Grimaud told him: “When it seems that you’re stuck, in retrospect those often turn out to be the times you made the most progress.” With that in mind, he now offers this advice: “Do things you suck at!”

“I admire works and performances in which the technique disappears in the message. That’s what it’s all about.”

Vienna has now been Frantz’s home for 18 years. Hindsight, of course, is the best way to see one’s growth, and that’s clear now in Frantz’s venture into public speaking. His first time came by chance. While finding relief for his physical pain in a yoga class, Frantz met someone there who invited him to speak at TEDxSalzburg. Even though he was generally comfortable speaking in front of people, he was terrified of going off-script and using filler words.

“I was thrilled by the invitation [to speak at TEDxSalzburg] but I thought I better learn how to speak in front of an audience.” On the road at the time, visiting family and friends, Frantz visited two Toastmasters clubs in Florida, which prepared him—beyond his expectations, he says—for the talks. But at first he was known among fellow Toastmasters for his foibles.

“In meetings, we count the ahs and ums, and I didn’t think I had any,” he says. “But invariably, I had the most. Toastmasters helped me become confident as a speaker.” When he gave his first TEDx Talk, he says, the organizers noticed his skill as a speaker. “I have Toastmasters to thank for that—entirely.” Other TEDx organizers noticed his professionalism, which resulted in repeat invitations. Today, the published scholar has been invited to speak at universities as a guest lecturer and recitalist, and he records for the Gramola label.

Frantz’s mentor, Paul Badura-Skoda, the Austrian pianist who has recorded more than 200 LPs (vinyl records) and dozens of compact discs, said in an interview on Dreama TV, “When you make a recording, do not think it’s a recording.” He advises Frantz to imagine he is performing in front of an audience of 2,000. “But it’s enough if you have only two people listening to you … to encourage you,” Badura-Skoda said. Having friendly people there while playing, he says, will help the recording sound like a live performance.

Frantz found that the presentation skills he was learning in Toastmasters were helpful in his musical performances as well. He joined the English-speaking Vienna Toastmasters club, which meets three times a month at the Hotel Erzherzog Rainer, an upscale hotel near the Vienna State Opera, earned the Advanced Communicator Bronze and Competent Leader awards and served as club president. He revamped its information technology and communications systems and created new marketing initiatives and digitized the club’s database. A new website and automated meeting announcements helped attract new member prospects, eventually yielding a boom in membership that tripled the club’s size.

But Frantz says it was the great spirit within the club, created by the synergy and teamwork among club officers, that attracted visitors and new members. He says the low-risk, encouraging environment of the club has helped condition him to feel more comfortable in front of audiences in general.

These days, Frantz is taking what he’s learned from Toastmasters about speaking, listening and leadership and applying it to personal, professional and societal goals. He delivers TED Talks throughout the world covering a broad spectrum of inspirational topics, from finding hidden dreams and exploring supposed limitations to musical taste and identity. Sometimes the presentations are purely talks, sometimes they’re purely music performances, and other times they’re both, depending on the topic.

Frantz also represents a United Nations-accredited think tank called the Diplomatic Council, with which he works on issues of human rights and social justice.  “Becoming a U.N. delegate,” he says, “is part of my mission to take what I’ve learned from Toastmasters and apply it in constructive ways. My dream is to get to witness specific legal changes around the world in my lifetime.”

Creating change requires communication skills, he says, which he continues to learn in Toastmasters. Frantz understands that most people join a club to develop presentation skills, but at some point, he says, “it’s important to move beyond that.” Although he admits it is critical in your early days of public speaking to focus on how you say something, he urges speakers to remember at the end of the day it’s what you say. “You’ve built up a skill set, and people will be impressed by those skills,” Frantz says. “But ultimately it’s the message that counts.”

Frantz has learned over time that listeners—even judges—will forgive the occasional technical slip if they’re moved by a powerful message.

Confirming his belief, as an artist, Frantz says the highest compliments come from critics who say he isn’t showing off his technique. “I admire works and performances in which the technique disappears in the message,” he says. “That’s what it’s all about.

In that vein, Frantz has learned over time that listeners—even judges—will forgive the occasional technical slip if they are moved by a powerful message. Excessive perfectionism, he says, is the enemy—whether one’s message is delivered in a speech or through music.


A Will to Succeed

A couple of years ago, still plagued by what was almost completely incapacitating back, neck and arm pain, Frantz again used an obstacle as an opportunity for growth. He became resigned to rebuilding his body, transforming his physical sense of self with a goal to compete in Ironman Austria. In 2015, he participated in the competition, which included swimming 3.8 kilometers, cycling 180 kilometers and running a 42.2-kilometer marathon. The new regimen is helping him to perform the athletically challenging music he enjoys—in the same year he did the Ironman event, he achieved his goal to record Liszt’s complete Transcendental Études.

A big believer in the philosophy of continual improvement, Frantz made it to the finish line in this year’s Ironman race too, and says, “I feel it’s time to get in shape again!” He calls himself
a hopeless dreamer and attributes his contrarian attitude—welcoming setbacks—to propelling him to unexpected places. The day following this interview, Frantz was heading to Frankfurt early in the morning [July 4] for a meeting of the executive committee of the Diplomatic Council. “Honestly,” he says, “I highly doubt I would have ever been invited if it weren’t for Toastmasters; there was just too much I needed to learn. It’s amazing just how helpful Toastmasters has been to me in diplomatic and other professional settings.”

It’s Frantz’s own perseverance in pushing through barriers that has resulted in a variety of opportunities for the gifted artist. “The vast majority of the time, what we think are our limitations,” he says, “are far inside our real limitations.”

Do you want to hear actual performances by Albert Frantz? Follow the links to hear him play:

To learn more about Frantz, hear him speak about his experiences in the documentary on Dreama TV.