A Roadmap for Club Growth

How I applied workplace strategies to help my club become Distinguished. 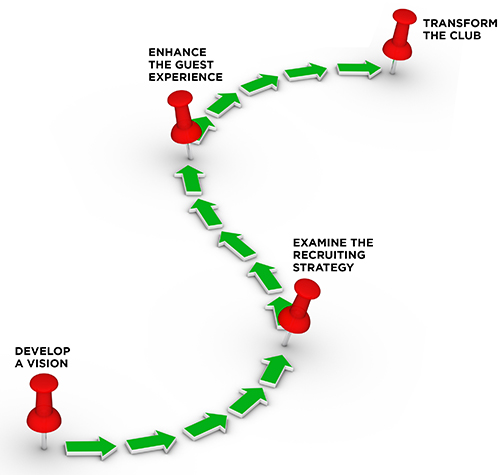 Does your club struggle with acquiring new members and getting current members to attend meetings? Do the same people fill officer roles each year? Do you host open houses, Speechcraft programs and other events to attract new members only to continue to struggle with low attendance? If you do, you’re not alone.

When I became president of the Snohomish City Toastmasters club, in Washington state, our club faced many of the same challenges. We had 11 people on the roster and typically only five or six showed up to a meeting. I saw the same five or six people repeatedly perform officer roles and they were getting burned out. Sound familiar?

Toastmasters has a long history of helping clubs grow; that’s part of the purpose of the Distinguished Club Program (DCP). Snohomish City Toastmasters had never been a Distinguished club, and I set out to change that. As a human resources and organizational development consultant, I work to solve organizational challenges. I was determined, as were my club officers, to create a plan— a “roadmap”—to become Distinguished. The benefits we enjoyed by implementing the plan were many. We had an 85 percent conversion rate for first-time guests, a 300 percent increase in membership in 90 days, and we beat all clubs in the district (most of Western Washington) for every incentive it offered. Not bad for a club that meets at 7:30 on Friday mornings in the small town of Snohomish. Our club reached President’s Distinguished for the first time.

The first part of our plan involved gaining a clear picture of our club’s current condition and the improvements it needed to become a thriving, vibrant club. We had an objective, a mission, and the DCP was the perfect vehicle. By using Moments of Truth as our guide, we developed a list of improvement requirements. By knowing specifically what we needed to do, we developed a plan to make it happen.

In business, mission statements often exist as nothing more than a plaque on a wall. In Toastmasters, because of the DCP, the mission is kept alive and drives a club to succeed. The mission is the measurement of the club’s success, but that isn’t what motivates people. What does is how the club suits members’ needs. We started out by developing a vision to hold the most positive, fun and uplifting meeting members and visitors would enjoy all week. And that meant running a high-energy club. However, we could only do that if we had enough participants, which we define as a minimum of 15 attendees at every meeting. If we assume that about 50 percent of a roster will attend a meeting, that means we need to have 30 members.

We had to examine our recruiting strategy. I did everything I could think of, but what worked was a simple email campaign. Club members began collecting business cards from grocery stores, restaurants, oil change shops, doctors’ offices, schools and anywhere else they could find them. They gave them to me, to the vice president public relations (VPPR) and to the vice president membership (VPM). I created a simple, short email with the subject line, “Please Be My Guest,” and spent two hours on Saturday mornings sending out invitations to our meetings.

The effect it had of bringing people through the door surprised us all. But, getting people to visit isn’t the same as getting them excited enough to join, and stay.

And so we took a page from the guest services industry—in particular from hotels like the Hilton and Four Seasons—and we compared the guest experience of staying in the hotels to that of those visiting our club meetings, all the way through the initial greeting to the meeting to the departure. We walked the walk from the parking lot to the meeting room and considered things that included ease of finding the meeting location, and more. This compelled us to buy two A-frame-style signs sporting the Toastmasters logo and arrows that pointed the way for guests.

The best ideas are often already thought of. Creativity is about using those ideas in new and effective ways.

We also transformed our concept of greeting and meeting. A club officer would now greet guests as they arrived. I focused on the visitors who had responded to my email invitations. All guests would then be introduced to an experienced Toastmaster who would explain to them the processes and events of the meeting. We never let anyone wander in without greeting them personally when they arrived. We also recognized them from the podium—at the start of the meeting, during Table Topics and again at the meeting’s end.

We transformed the meeting itself, as well. We were getting people in, which meant we had more people to fill officer roles, but who wants to commit to some unknown or ill-defined obligation? We had to de-mystify the club officer roles. We started reserving two minutes at the end of each meeting to ask one officer three questions: What have you done since the last time you spoke? What are you personally gaining from your experience? And how much time are you spending per week performing your role? Members responded favorably; we soon received 11 volunteers for seven officer positions. Another thing that worked was posting progress charts on the wall, indicating each member’s success in the manuals. This really surprised us. People started taking note of how they measured up, and that created some interesting dynamics. We had to extend our meeting from 60 to 75 minutes to accommodate all of our speakers.

We borrowed another best practice—tactile rewards—this time from the sales industry. We purchased plastic trophies from a discount store and handed them out for every “Best of” award. The value wasn’t in the trophies; it was in what they did for guests and new members when they relayed their member experience to others. That generated word of mouth advertising and new members started bringing their families, friends and coworkers to meetings.

In addition, we put a formal communication plan in place. We contacted every member and guest three times a week. Within 48 hours of a meeting, our club secretary sent minutes to all guests who attended meetings within the past three weeks, as well as to all members. Midweek, the VPE sent the same group a list of speaking and leadership assignments for the next meeting. The day before the meeting, I sent invitations. This improved member retention by 45 percent the first year.

The best ideas are often already thought of. Creativity is about using those ideas in new and effective ways. That’s really all we did, but we didn’t stop there. The final stages of our work involved creating a website, email address, Facebook page and Meetup site. We’re now drawing guests from those sites and they tend to join at the end of their first meeting when the VPM asks, Would you like to join one of the most successful Toastmasters clubs in the district?

My career has been about solving problems. I used the tools and techniques I had learned from the field of organizational development to build club membership. That gave our club a competitive advantage.

The roadmap we used to build the club has also produced success for our sister club—The Monroe Vocal Project, in Monroe, Washington. Previously, the club was close to closing, but this year, it has become President’s Distinguished. Members accomplished that goal in just nine months, but it took work to make it happen.

Jay Sunderland, ACB, ALB from Lake Stevens, Washington, is CEO of the JKL Consulting Group. He is a member of ­Snohomish City Toastmasters. Visit his website at www.jayspeakslive.com.