Anthony Cappel-West joined the Orange County (California) Asperger’s Support Group (OCASG) Toastmasters Gavel Club in 2017. When he signed on, the club, which turns 10 this month, was already well established as an OCASG-sponsored activity for adults with autism spectrum disorder (ASD).

Cappel-West, who has ASD, was quickly intrigued by the club’s organization and purpose. “I liked the structure and the ability to practice speaking skills,” he says. “It was an eye-opening opening experience.”

Judi Uttal, DTM, a Toastmaster since 2012 and a member of The Contrarians club in Irvine, California, is the driving force behind the long viability of the OCASG Gavel Club, which she launched with a Speechcraft program. She was convinced that Toastmasters training could benefit her son, who was diagnosed with ASD in 1995.

The U.S. Centers for Disease Control and Prevention estimate that 75 million people—about 1% of the world’s population—have ASD. This includes the World Health Organization’s (WHO) estimate that ASD effects one in 100 children around the world. The WHO recently adopted an autism management resolution supported by 60 member countries. The term “spectrum” refers to the variety and severity of symptoms that can be present across this neurodevelopmental disorder. Among the symptoms, ASD individuals can experience a high level of anxiety when communicating in social situations and relationships, despite typically high levels of intelligence.

While Uttal’s son decided that Toastmasters was not for him, his mother still felt that it would be a good choice for other young people with ASD because it’s aimed at developing key skills that are typical deficits for them. “Specifically, improvements in communication skills, understanding others’ points of view, and the ability to listen,” Uttal explains. A Gavel Club also offers the important advantage of learning in a supportive environment.

"While many [ASD] therapies try to change you, Toastmasters is about finding your passions."

Uttal explains that individuals with ASD typically struggle to maintain conversations with others and feel tremendous anxiety when put in uncomfortable situations. They may misunderstand verbal and non-verbal social cues. Many were bullied while growing up, leading to isolation and depression. Uttal is familiar with these challenges and sees Toastmasters’ programs as highly promising activities. She’s so convinced that, in addition to her OCASG work, she’s a mentor and sponsor of the Neurodiverse Leadership Toastmasters club, an ASD-oriented online club chartered in June 2022.

Liam Whitney, DTM, a member of the OCASG Gavel Club, says public speaking skills are important because he teaches high school students with disabilities. While he belongs to several clubs, he feels OCASG is still a good fit for him.

Both Whitney and Cappel-West believe that evaluations are the best part of the Toastmasters experience. “Hearing constructive feedback can be hard but it is necessary,” said Cappel-West, who plans to finish his bachelor’s degree in psychology at University of California, Santa Cruz, in 2024. “I also like being an evaluator because it teaches me to be more tactful. I can be too honest sometimes.”

Whitney enjoyed evaluations so much that he joined the Lakewood Star Speakers Toastmasters in Lakewood, California, so that he could participate in speech contests. He is also a member of the Long Beach Gavel Toastmasters Club in Long Beach, California, and the new Neurodiverse Leadership club, based in New York City. Whitney also served as an Area Director for Area 5 in District 1 in 2020-2021.

Positive connections with others, along with welcomed responsibilities, allowed Whitney to grow his self-confidence and change how he views himself. “Toastmasters helped me to see my leadership potential,” he explains.

Uttal says that ASD individuals feel accepted in OCASG because “while many therapies try to change you, Toastmasters is about finding your passions.” The club encourages members to share their mutual interests such as music, comic books, and video games, in a way that other clubs may not.

Both Cappel-West and Whitney see definite benefits from their Toastmasters experiences. “I am more aware of my mannerisms. I would use my hands way too much,” said Cappel-West. “I am also much more aware of the audience and my professionalism has increased.”

Whitney says that he enjoys watching people grow in Toastmasters. “I am excited about being in Toastmasters and being in the autism group. It’s great to see them come together. Toastmasters works really well for anyone who puts in the time and effort.”

Learn more about the club.

Peggy Beach, DTM is a past District 37 Governor and a member of two North Carolina clubs: Hi Rise Toastmasters in Raleigh, and Top Triangle Toastmasters in Morrisville. Contact her at  writereditorpeggybeach@gmail.com.
Next Article 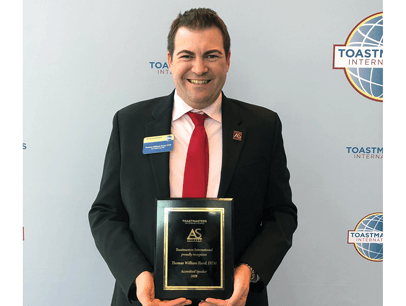 Breaking the Barriers of Autism

My experience speaking at the United Nations World Headquarters. 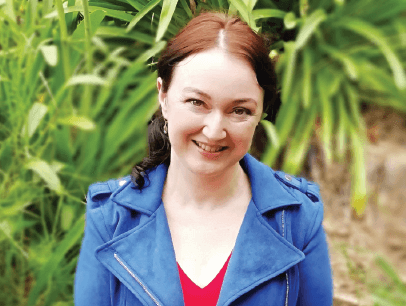 Fitting In As An Autistic Speaker

How my club became my university and happy place.

Researchers will test the benefits of public speaking curriculum.

The Organization for Autism Research (OAR) has awarded a 40,000 (USD) grant to researchers at California State University Fullerton “to investigate the impact of a community-based public speaking program for autistic individuals.” Specifically, a program like Toastmasters.

Researchers include Sasha Zeedyk, Ph.D., a professor of child and adolescent studies at the California State Fullerton campus, and Yasamin Bolourian, Ph.D., an independent researcher and specialist in autism from early elementary to postsecondary education. To help carry out the study, the researchers have partnered with longtime Toastmaster Judi Uttal, DTM, a member of The Contrarians club in Irvine, California, and a 10-year leader of the OCASG Gavel Club for autistic young people.

The viability of such a study began to shape when Uttal invited Zeedyk to an OCASG club meeting.

“One meeting was all it took,” says Zeedyk. “I knew immediately I wanted to understand the efficacy of Toastmasters for people on the spectrum. The members were so engaged. They seemed genuinely happy to be sharing their Saturday morning with each other. The speeches were remarkable, and the formal structure of the meeting seemed so appropriate for autistic people, who tend to thrive in predictable environments.”

In the first year of the study, Zeedyk and Bolourian will conduct interviews and focus on gaining a comprehensive understanding of whether, for whom, and under what circumstances Toastmasters is a meaningful program for autistic participants. The two will use the findings to identify potential program adaptations, particularly Speechcraft. In the second year of the grant, the researchers will run a pilot study to evaluate the effectiveness of the adapted program for autistic people.

Zeedyk says this study is important because it will include autistic individuals in the creation, implementation, and evaluation of the program. Previous programs have often relied on reports from caregivers and have encouraged autistic individuals to interact socially as if they did not have autism. This phenomenon, known as “camouflaging,” causes high stress and anxiety for these individuals. Zeekdyk and Bolourian hope to build a program that encourages autistic participants to be their true selves.

Bolourian says the study will be unique because Toastmasters is unique. “Toastmasters provides structure such as a weekly format, while also allowing for individual [speech] choices,” she says.

The global reach and accessibility of Toastmasters is also a key element for Bolourian. “Toastmasters is a well-established and widely available community-based program with some 280,000 members worldwide. The broad reach of the organization demonstrates the potential for our adapted program to easily reach across communities,” she says.

Uttal and the OCASG club are looking forward to being part of the study. “I’m very excited and can’t wait to help with the research,” says Uttal.