Funny You Should Say That
March 2022

Of right wings, left wings, and a plane with both on a possible trip to Switzerland. Like most people, I automatically refer to conservative and liberal political opinions as being “on the right” or “on the left,” respectively—without having the slightest idea why. What do left and right have to do with politics? They’re spatial designations and we have them all over our bodies—arms, legs, eyes, ears, nostrils, feet. If you’re right-handed are you conservative and thus forbidden from parting your hair on the left? If your left eye is dominant, is it treason to pick your right nostril? If your right and left arms are equally strong do they punch each other until you have to be physically restrained? When a liberal is riding in a car with a conservative driver and says, “Turn left,” does the conservative turn right instead, even if it’s into a cornfield?

This, of course, is ridiculous, and yet here we are, referring to “right wing” media and “left wing” activists as if it were the most natural thing in the world. How did this come to be?

I’m glad you asked. If we go back to the French Revolution of 1789, and if we attend a meeting of the National Assembly that replaced—to put it mildly—the monarchy of Louis XVI, we will find a parliamentary gathering in which, for strictly arbitrary reasons, supporters of the king stood to the right of the president while adherents of the revolution occupied the left. Hence, two words that have caused untold sturm und drang throughout modern history began as seating arrangements. Royalists? Party of four? Right this way. It wasn’t until the Third French Republic of 1870 that people noticed this might be a pattern relating to politics. HELLO!

In the broadest possible terms, then, left has come to represent change while right indicates a preference for the status quo. As an example, we might say that all parents are right wing in that they insist their children adhere to the established order, and all children are leftists in that they rebel against any traditions inhibiting their personal freedom. My own early years were like that. I saw my parents’ rules as products of the Dark Ages and my childhood as the Enlightenment. My mother and father did not share that view, and when my actions justified it they would enlighten me in ways that had more to do with Torquemada than Descartes.

What do left and right have to do with politics?

Before we leftists and rightists start yelling at each other, however, we might consider the research of Ryota Kanai, a cognitive neuroscientist at University College London, which suggests that biology may play a part in our political orientation. This is promising because it allows either side to say, “Don’t blame me—I was born this way!” While his work is far from definitive, Mr. Kanai did discover that conservatives had a strong sympathetic nervous system, heightening their sensitivity to perceived threats (like change?). Those of a liberal bent had more gray matter in the anterior cingulate cortex, predisposing them to more easily detect errors in recurring patterns (like status quo?). Interesting. If there is truth in this, one could imagine a fiery leftist anarchist suffering some sort of brain trauma and waking up with an intense desire to chair the Conservative Political Action Committee.

If left and right seem like improbable political symbols, what about the elephant and the donkey? How did that happen? (For readers not familiar with American politics, the elephant represents the Republican Party and the donkey stands for the Democratic Party.) This can be traced directly to Thomas Nast, a political cartoonist working in the mid-19th century who saw politics then as most of us view it today: a menagerie of wild creatures acting in a way that resembles a circus. The story of how each party got its animal is too long for this space. Suffice it to say, Republicans have officially adopted the pachyderm for its portrayal of size, strength, intelligence … and a long memory. Democrats have not adopted the donkey, even though its intelligence and memory rival the elephant’s. When people see a donkey they think “jackass” and people don’t vote for jackasses (well, they do but … never mind.) Thanks to Mr. Nast, Democrats are stuck with it just the same.

As a compulsive people-pleaser with both liberal and conservative friends, I belong to the Spineless Appeaser Party. I agree with both depending on who I’m with, confident I’ll never get caught because they never speak to each other. If they do, I can always book a flight to Switzerland. 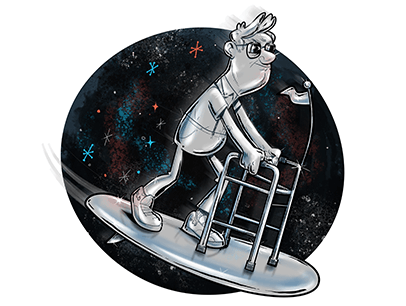