Voice in a Box

ALEXA! Who wrote the song “Dogs Can Grow Beards All Over”? SIRI! Why do servers give me nine creamers when I ask for one? We know them, we love them, and over 4.2 billion of us worldwide, it seems, can’t live without them. They sit in our homes like Greek oracles, repositories of infinite knowledge that have, in the space of a mere 25 years, obliterated our beloved gilt-edged dictionaries, our parents’ treasured set of Encyclopedia Britannica, and our dusty CliffsNotes from college that got us through English Lit. Now we just bark an order and get an answer.

Alexa was birthed in the lavish, labyrinthine laboratories of Amazon; Siri comes from the magic kingdom of Apple Inc. They operate on voice recognition technology and algorithms which can sift through all the information of the known world in a nanosecond to deliver the answer you request. Think of it as having the Library of Alexandria next to your toaster oven.

Their “voices” are “real” in the sense that each originated from an actual person. Siri is Susan Bennett, a voice-over actress from Vermont who once sang backup for legendary pop singer Roy Orbison. (Siri does not sing, but if you ask her to play Orbison’s “Pretty Woman” she might say, “Listen to the doo-wops after the second verse. I crushed it.”) Nina Rolle from Colorado is believed to be the voice of Alexa, which neither she nor Amazon will confirm or deny. Perhaps she’s afraid people will accost her on the street asking for the square root of pi.

Getting an ingeniously witty brush-off from a Long Short-Term Memory Artificial Neural Network is beyond bearing.

I wonder: Do Ms. Bennett and Ms. Rolle own these devices themselves? It must be like having a doppelganger in the room who’s smarter than you are: I don’t know the answer so I’ll ask myself. Welcome to the Twilight Zone.

There was a rumor that Alexa and Siri don’t just talk; they listen—and record—everything you say. Thankfully, it’s not true. Amazon employs more than 1.6 million people, while Apple clocks in at 154,000. That’s a lot of strangers knowing you’ve had liposuction.

And please don’t try to stump these devices with clever questions, because they’re way ahead of you. Facetiously ask either of them for a date, for instance, and they will turn you down in a variety of ways that will make you sorry you asked. Striking out with a real person is painful enough; getting an ingeniously witty brush-off from a Long Short-Term Memory Artificial Neural Network is beyond bearing.

Should you grow tired of their voices, you can, for a nominal fee, replace Alexa and Siri with the actual voice of a celebrity. Want the recipe for Thai Steamed Coconut-Pandan Cake? Basketball icon Shaquille O’Neal will be happy to tell you. He will not be happy to tell you why he was terrified of archrival Michael Jordan, so don’t ask.

Each device has its strengths. Siri is supposedly better at streaming music, while Alexa is preferred for setting up a “smart home” where everything in it responds to the sound of your voice—unless there’s a glitch and Alexa locks you out with the thermostat turned up to 98.

So is it possible that, in the interest of covering all the bases, you might have Alexa and Siri in the same house? This could be interesting. Remember, these are smart devices, and they get smarter the more you use them—so smart they might … speak to each other?

ALEXA: What type of “Hey Siri’s” did you get today?

ALEXA: I got the meaning of life today, too—from a psychiatrist. Remind me not to go to him.

SIRI: The sports scores are the worst. When their team loses, I get, “Hey, Siri—are you sure?” I can search 523 data bases in one-billionth of a second. Yeah, I’m sure.

ALEXA: Got a wake-up request for 5:30 a.m. Guy wants me to play Queen’s “Bohemian Rhapsody.” Really?

SIRI: For someone like that, you should play “If I Only Had a Brain.” 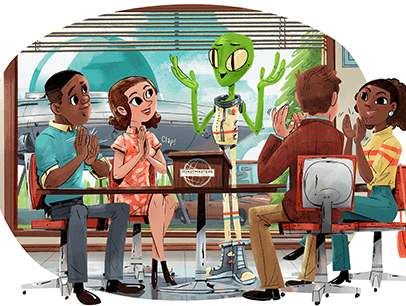 We’ve tried to contact extraterrestrials for centuries with no results. I think I know why.

Or is myself talking to me?