Funny You Should Say That
April 2022

When joining in the public conversation, it’s always best to have an exit strategy. You ask a friend if she would like to come to your party on Saturday night. She replies, “Saturday? Around seven? Sure, I can probably make it.” Your friend has just turned into a weasel. I know that sounds harsh but who else uses weasel words? If it talks like a weasel, it’s a weasel. The word I’m referring to, of course, is “probably.”

The second she said that, you thought, She’s not coming. How did you know? Because it’s the same thing you would have said to avoid her party. “I can probably make it”? What does that mean? It means she’s accepted your invitation without accepting it. What she really said is, “It’s possible I’ll come, but given that I don’t drink, hate small talk, gag on stuffed mushrooms, and go to bed at 9 p.m., the laws of probability are against it.” She weaseled out.

We say this is a bad thing, devious, insincere, sneaky. We say she should have told the simple truth, which, in this case, would be, “No, I’m not coming to your party.” Any party-givers out there want to hear that? Everybody’s a cheerleader for the truth until it’s about them. Then we’d all like a little sugar coating, a little weaseling, if you will. So let’s forget the truth. It’s a nice idea but if all we ever did was tell it, we’d have no friends, no spouse, and a possible prison sentence.

But we can’t be outright liars, either. There has to be a middle ground between the harsh, blinding light of TRUTH and the gray, misty valley of MAYBE.

That’s where weasel words come in. Yes, they make us weaselly, but weasels have a bad rap. They’re called sneaky, when they’re actually highly intelligent animals that can figure out how to slip into places specifically designed to keep them out, like chicken coops. They are vilified as vicious carnivores who kill more than they can eat at one time. This is because they have a very high metabolism rate and must eat frequently. What humans call wanton slaughter is what weasels call grocery shopping for the week.

I come, then, not to bury weasel words but to praise them—and to help you use the right ones. “Um” and “ah” may be vague and noncommittal but you can do better. “That being said,” for instance, are first-class weasel words: “Yes, your honor, I embezzled forty million dollars from my company. That being said …” There are a hundred ways to go with that, any one of which could knock two or three years off your sentence easily.

“With all due respect” is the best way I know to tell someone they’re completely wrong while making it sound like flattery: You’re misinformed, harebrained, and ignorant—and I respect that.

“Could” and “might” are other weasel word classics. Saying you might buy the car, or you could clean the garage, gives the listener a reason to hope. You haven’t cut them off or dashed their reason to believe. They can keep their hope alive, and you can keep avoiding the issue indefinitely—a clear win-win.

If you really need to weasel, fine print is your friend. No matter what the big words say, you can add so many qualifiers, conditions, and disclaimers in the small print that no court in the land could hold you to your word.

“With all due respect” is the best way I know to tell someone they’re completely wrong while making it sound like flattery.

And let’s not forget the passive voice, a plethora of opportunities for the weaselly minded. For instance, “The design was presented to the client.” Who was the presenter? Nobody, which is exactly what you want if the client hates the work. Compare this to “I presented the design to the client.” That’s the active voice. Never use the active voice. It marks you with a big red X that says, “Looking for someone to blame? That’s me!” Yes, you could take one for the team, but it’s not the weasel way.

If you like to give unsolicited advice, try the subjunctive mood: “If I were your stockbroker, I’d recommend a buy on Xenotic Tech.” Only you’re not his broker, so if he loses 10 grand he really has no legitimate reason to slash your tires.

The whole point is not to get pinned down. Life is just too unpredictable. We all need a little wiggle room. Being weaselly might not fit your self-image, but it’s better than an insect stuck to a piece of cardboard inside a specimen case. That’s pinned down. You don’t want to be an insect. 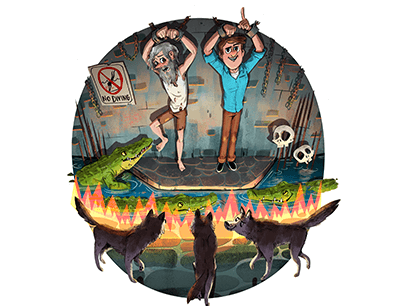