A California club celebrates both the spoken and the written word. Members of Rough Writers in Long Beach, California, enthusiastically refer to their club as a hybrid of skill sets: a place where speakers become snappy writers and writers become captivating speakers. The ultimate goal is the mastery of storytelling.

Club co-founder Susan Cameron, DTM, a longtime Toastmaster, is a fervent believer in learning and leveraging both speaking and writing skills. She was interested in broadening the format of Rough Writers to extend the creative lifespan of speeches.

“Toastmasters and Rough Writers have the same starting point, which is to write a story,” she says. “Yet once given, speeches are often thrown away. Have you ever noticed that good, informative speeches could be turned into books or other published works? We didn’t want our speeches to die.”

The dual-discipline study teaches a wealth of techniques, such as timing, gestures, vocal variety, pacing, inflection, and eye contact. Members also become comfortable using figures of speech, such as metaphors and analogies.

“Our members learn how to turn a phrase and bring it into their speeches. It’s very important in both mediums to show or create a picture, rather than just tell about it,” Cameron notes.

The club relishes the rich mix of individuals in its membership. In fact, the club name is adapted from the Rough Riders, a U.S. volunteer calvary during the 1898 Spanish-American War. The calvary was known for its daring exploits and cadre of flamboyant characters, including college athletes, miners, cowboys, and Native Americans.

The Rough Writers is home to a similarly colorful cast: veteran Toastmasters, beginning orators, published authors and novice writers, retired professionals, college students, businesspeople, and educators. “However rough their skills may be, members are able to refine and polish their writing and speaking in a supportive and collegial environment,” the club history says.

Ana Clara Otoni C. Moreno, Vice President Public Relations, delights in the club’s diversity, which she sees as a vital asset to creativity. Imagine sharing stories with a U.S. Air Force veteran, a Brazilian journalist, business leaders, or a seasoned Toastmaster who is a former Hollywood talent manager and a former backup dancer for the iconic American soul singer James Brown.

“Some of our early members had published books but needed practice speaking to an audience at a book signing or launch,” Martinez says. So she, Cameron, and another founder, Brad Jorgenson, DTM, sought to create a club that Martinez describes as “flexible enough to be attractive to writers and to members who wanted to work primarily on public speaking and leadership abilities.”

Rough Writers alternate between Pathways and writing-focused meetings. During writing exercises, participants may use stories as Table Topics. Speakers and writers are encouraged to turn their work into short stories or essays.

In fact, the club further supports its mission by publishing an annual anthology of its members’ work and by sponsoring Bragging Writes, a short story writing competition for members.

Will Valdez, the club’s enthusiastic Vice President Membership, was looking for the traditional Toastmasters club format when he joined.

“I wanted to improve my public speaking skills. I honestly didn’t know it was also a writers’ club when I signed up,” he says. “However, during my Ice Breaker, I mentioned taking screenwriting courses. As soon as I said that, the club began to encourage me as a speaker and a writer,” he says.

“The biggest selling point I make about Rough Writers is that we are not a cookie-cutter club. This is a club that lets you express your creativity in different avenues. We have so many supportive members that are ready to give a lending hand and advice. Anyone who joins is welcomed with open arms.” 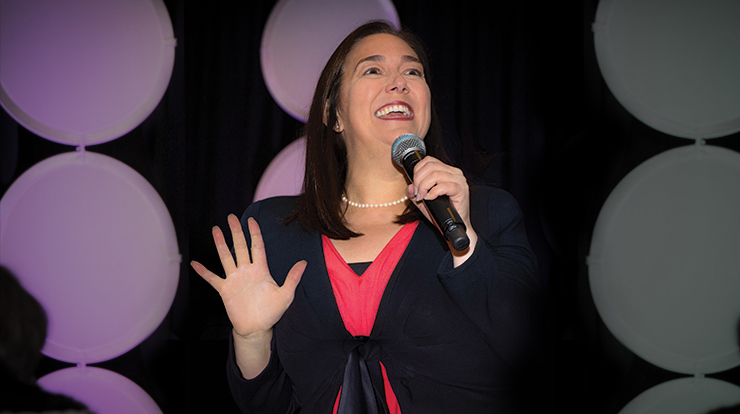 A New Chapter for Freedom Writers

Erin Gruwell and her former struggling students take their stories to the stage.