How to Accept an Award

The best acceptance speeches are gracious and full of heart.

It’s your moment of triumph. So you grab the closest pen or hairbrush and launch into an overdramatic thanking of the Academy, declaring “You like me!” and telling your kids to go to bed as the invisible orchestra drowns you out.

We’ve all played out that imaginary moment. But maybe we should stop, says San Francisco speech coach Patricia Fripp. Those famous televised award speeches are actually a “what not to do” when receiving an honor. In their brief time in the literal spotlight, most winners resort to over-the-top gushing and false modesty. Or they breeze through an uninspiring laundry list of verbal gratuities.

“Most Academy Award speeches are pathetic,” says Fripp, a frequent speaker at Toastmasters conferences and a former Toastmaster herself. “You want the emotional connection. Paint the picture. Inspire passion in others.”

If you are active in Toastmasters or your community, or are a generous philanthropist or a dedicated team member, chances are you will eventually be recognized for your time and efforts. And you might be expected to make some remarks in front of your peers when you do. Fear not, fellow Toastmaster: A good acceptance speech has the same objective as every good speech—to be gracious, powerful, and memorable—only in less time than a typical speech.

“You can have more impact with a well-crafted three- to five-minute speech than you can with 45 minutes,” Fripp says. “However, every word must count.”

The “Deliver Social Speeches” project in the Pathways learning curriculum gives all Toastmasters the opportunity to practice receiving honors—and bestowing them—through a choice of two social occasion speeches. These are designed to be delivered in three to four minutes each. This unique project has endless real-life applications—from offering a toast at a family celebration to honoring a retiring coworker or even getting public recognition.

Fripp’s failproof approach to a winning acceptance speech is to tell a story about the organization or group giving the honor If it’s a college alumni award, for instance, talk about the awe you felt the first time you visited the campus in person. For a workplace award, speak about a manager who encouraged you to stay during a difficult period. Or, in the case of a named award, reference the namesake and describe your lifelong admiration of their achievements.

When it comes to pitfalls, Fripp says to avoid these two things: trying too hard to be funny and speaking without preparation. Even her own coaching clients, many of whom are business executives, are steered wrong by award shows. “Be profound, be wise, be gracious. But don’t try to be funny if you aren’t; otherwise, it will backfire,” she says. Even an innocent, self-deprecating remark can bomb. Declaring that you don’t deserve an award or that anyone could have done what you did is not only an insult to the other nominees, but also to the prior winners and especially to those who nominated and selected you. Will Heeman gives an award-acceptance speech in London, Ontario, Canada. He expressed abundant gratitude and used a dash of humor.

Will Heeman knows well the careful balance required to be both funny and respectful. The “Chief Daymaker” of Heeman’s, his family’s garden and farm business in Ontario, Canada, he has accepted three business awards in the last five years at the London (Ontario) Chamber of Commerce gala, before 1,500 other community leaders. Business events can be especially dry, and he says that industry puns—“dad jokes,” if you will—can find a receptive audience at them. In 2019, he accepted the chamber’s Environmental Leadership award on the first day of spring. “We’re so excited today,” he told the audience, “that we wet our plants!” The quip hit the mark and still gets repeated.

As for using the big event as your “Evening at the Improv,” Fripp instead suggests being “perpetually prepared” in order to be gracious in front of your peers. We all have the opportunity on a regular basis to practice publicly expressing appreciation—whether on conference calls at our jobs, in committee huddles for our community work, or at our Toastmasters meetings.

For example, if you are asked to present a status update on a project, Fripp suggests you try saying something like, “On behalf of the dedicated three-person public relations team, thank you for the opportunity to report on our progress. You will be pleased to hear that our extra hours and late-night emails enabled us to complete our website redesign two weeks ahead of schedule. This feat wouldn’t have been possible without the generous technical assistance of the treasurer, as well as your support.” If you work this type of phrasing into your everyday speaking, it won’t be difficult to do so when called up to receive formal recognition, Fripp says. It might even plant the seed that you are a leader worthy of recognition.

Of course, being prepared also means drafting a speech ahead of any awards ceremony and practicing it with others enough times that you won’t need notes. You never know if you will have your hands full with a microphone or the award or if the lectern is unwieldy. Fripp also advises confirming ahead of time if you are expected to deliver remarks. “If you know you are going to accept an award, prepare, script, and rehearse,” she says. “If you believe you may be called to accept an award, prepare in case.”

Aaron Lee of Oxford, England, was a tuxedoed finalist sitting at the 2017 Museums + Heritage Awards ceremony when he discovered that the winners were giving speeches. A few categories later, he was doubly surprised to hear his name called as a Volunteer of the Year winner. In front of a room of 350 others, the then- university student delivered his first-ever formal remarks.

“Before I was called, I had a mental idea of what I would say,” he says, “and then you get called and that goes out the window.”

Lee admitted to the audience that he hadn’t even known he was nominated until he was short-listed. His shock quickly settled and he expressed appreciation to the audience, the sponsors, his nominators, and even the event staff serving the dinner. He won the award for his work at the Museum of Oxford, a gem of a civic museum that gets overshadowed by those of neighboring Oxford University—“which are alright,” he deadpanned to the crowd representing many of the U.K.’s most notable institutions.


These award winners agree that being honored is only the beginning. Immediately after the ceremony, you will have a room full of people waiting to congratulate you, so make it easy for them. Lee says he got positive feedback after speaking and was also invited to later do a radio interview. Heeman, the Canadian awardee with the agricultural business, says that such a speech might be your only chance to make a first impression to a room of potential customers or connections.

“At the end of the day, winning an award and jumping up onstage and having a big smile on your face—why would you not embrace that moment? I want people to look back and say, ‘That speech from the guy at the strawberry place, that was pretty good.’”

How to graciously accept an award. 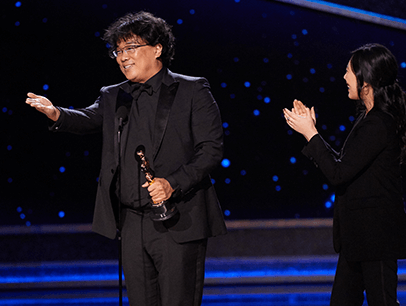 Speechmaking From the Stars

Hollywood's annual night of Oscar awards gets everyone talking. 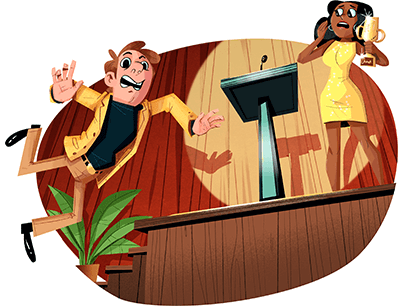