Turn on the news or fire up your favorite social media app, and you’re likely to encounter a world divided. To wear a face mask or not to wear a mask? How much social distancing is enough? What about racial and social justice, politics, elections?

“It’s an unusual time right now,” says Sindy Martin, DTM, a member of two clubs in High Point, North Carolina. People’s feelings are involved in conversations around such issues as coronavirus and racial inequity, she says, “and any time feelings are involved, it gets deep and people may get hurt.”

As Toastmasters, we are trained to listen, speak, and evaluate topics in a thoughtful, civil manner. We also tend to enjoy lively exchanges and so may feel uniquely qualified to dive into discussions on subjects such as these—but should we? And if so, how? Sensitive topics are always, well, sensitive, but in 2020, it seems they are even more so.

Here are some strategies from conflict resolution experts and fellow Toastmasters to help navigate tricky topics, whether you’re at work, a holiday party, a family gathering, or with a group of relative strangers.


Do a Cost-Benefit Analysis

Is it worth it to even engage in a conversation about why you should wear a mask to stop the spread of COVID-19? If it’s a stranger at the grocery store, maybe not. You’re not likely to change their mind, and the situation will likely just leave you frustrated, or even escalate to a level you didn’t anticipate.

However, if it’s a topic you feel strongly about, you may feel, as many people do, that you have a personal, moral responsibility to express your opinion. Even so, you don’t have to initiate a lengthy debate.

“Martin Luther King Jr. said, ‘Our lives begin to end the day we become silent about things that matter,’” says John Zimmer, a member of the International Geneva Toastmasters Club in Switzerland. “When it comes to issues such as racism or social inequality or environmental degradation, people should speak up.

“Even if you don’t want to engage,” Zimmer says, “you can always tell the person that you respectfully disagree but that you prefer not to discuss it now.”

If you do engage, know what kind of interaction you want to have, says Tamra d’Estree, a social psychologist who directs the Conflict Resolution Institute at the University of Denver in Denver, Colorado, “It’s important to ask ourselves why we are engaging interpersonally with this person who differs from us,” she says. “Are we doing it because we want to change their mind? To be honest, that’s probably the least likely thing that’s going to happen in that interaction.”

That’s why, when it comes to conversations on hot-button topics, it’s important to set a goal. Do you want to feel heard? To share your view? That’s easier to do when your goal doesn’t involve the other person, notes Jesse Scinto, DTM, a member of Greenspeakers Toastmasters in New York City and a communication faculty member at Columbia University in New York City. “The way I approach it now is I let go of responsibility for other people’s beliefs,” says Scinto, who is also CEO of the strategic communication firm Public Sphere. “I don’t have to change their beliefs, but I think it’s important for me to be able to state what I believe—and state what I believe with an ‘I’ statement.”

“They’re not going to remember the facts you threw at them but if you tell a story it’s going to be in their head.”

Research suggests that when a person knows you have a different viewpoint, it may lead them to reconsider their own opinion. In other instances, mutual respect among the debating parties may lead people to think harder about differing ideas, or lead to a truce—simply agreeing to disagree on the topic and ending the conversation peacefully.

If the same topics keep rearing their heads in conversation, it’s smart to think ahead and prepare some possible responses. Not only does that keep you on topic, it removes the heated feelings that can arise when a subject takes you by surprise.

And, of course, remember your Toastmasters training. One way to think about a conversation on a tough topic is that it’s just practice for the next one.

“The way that Toastmasters helps is just by building confidence to speak,” Scinto says. “When you’re on a hot-button issue, even if you’re one-on-one, face-to-face, it can still be kind of like public speaking. You still feel a little bit exposed when you reveal that you have a different opinion.”

And while facts don’t always do a lot of good in the moment, it never hurts to prepare yourself with credible information on a topic that might come up in conversation. That way, Toastmaster Martin says, “if they disagree, it’s not with you—it’s with the facts.”

One of the most fundamental human desires is the desire to be heard. No matter how heated a topic, recognizing the other person’s humanity and really listening to what they have to say goes a long way toward de-escalating any potential conflict.

Martin says that it’s important to make listening feel authentic. After the other person speaks, acknowledge that you listened by saying, “What I heard you say is … ,” suggests Martin, who is a trainer and coach.

While Martin advises having some verifiable facts on hand when discussing controversial topics, Scinto believes facts are virtually worthless to people who disagree with you. It’s readily apparent, in today’s information-saturated world, that facts can be disputed, countered, or ignored altogether. What is more helpful in heated conversations, experts say, is sharing personal experience.

“You can say either, ‘I’ve had this experience,’ or, ‘My roommate told me the story of when he was in this situation and this happened to him,’” d’Estree says. “If you share something that is your own experience, it’s a little harder for the other side to deny that. It’s harder for them to say, ‘No, you didn’t experience that.’”

Sharing a personal experience brings things back to a human level, d’Estree adds, and if done well can even evoke empathy on the other side.

“They’re not going to remember the facts you threw at them but if you tell a story it’s going to be in their head. It’s something they might share with somebody else.”

So the next time you engage with someone around a controversial topic, remember to set a goal, share personal experiences, call on your preparedness, and really listen to what the other person is saying. You might be surprised at the results. 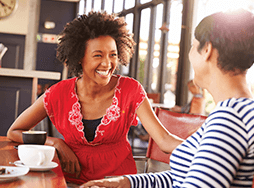 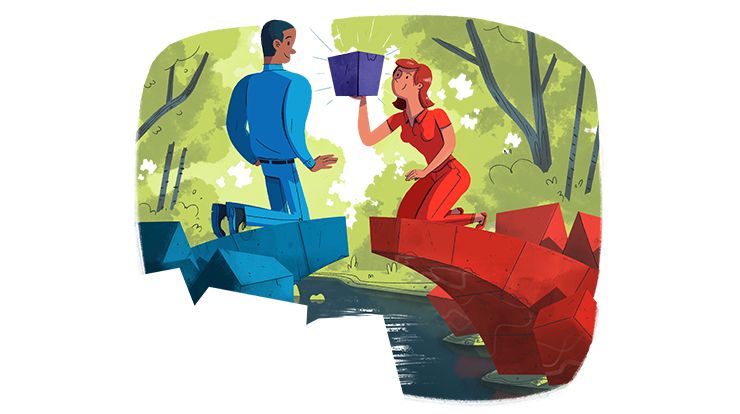