About a decade ago, the Grand Junction Toastmasters Club in Colorado struggled with declining membership as older, seasoned speakers passed away and younger members accomplished their goals and moved on. With only a few people regularly attending meetings, members juggled multiple meeting roles to keep the weekly club moving forward.

The club, located in a largely rural part of western Colorado, celebrated its 65th anniversary in November 2019, and is once again a strong, vibrant club, with 20-plus active members. Membership is diverse, ranging from college students to entrepreneurs, retirees, professionals, and stay-at-home parents. For the past three years, the early-morning club has earned the President’s Distinguished award.

Grand Junction Toastmasters began offering community outreach programs, which have helped publicize the benefits of Toastmasters and sparked energy and excitement in the club.

In February 2012, the club hosted its first Speechcraft program—a six-week course where community members are introduced to Toastmasters and the fundamentals of public speaking. The club has held the program occasionally over the years and it has attracted new members to the group.

In 2013, club member and current Area Director Mary Watson, DTM, proposed that the Grand Junction club sponsor a Youth Leadership Program (YLP). The eight-week Toastmasters workshop consists of one- or two-hour sessions, where young people under 18 can practice communication and leadership skills. The club held the workshop that year and has been hosting successful YLPs ever since, finding that the program benefits both young participants and the club itself.


An Opportunity to Help

Mary Watson also volunteered at a mentoring program for at-risk children, called Mesa County Partners. As a Toastmaster, she recognized an opportunity to further help kids.

“When we started the Youth Leadership Program, it was inspiring—we wanted to include all kids,” Watson says. “We contacted [Mesa County] Partners, homeschooled kids, private and public schoolchildren, and teens who worked for the Colorado Conservation Corps. It was a good mix of kids. It’s what I wanted—to be inclusive and diverse.” 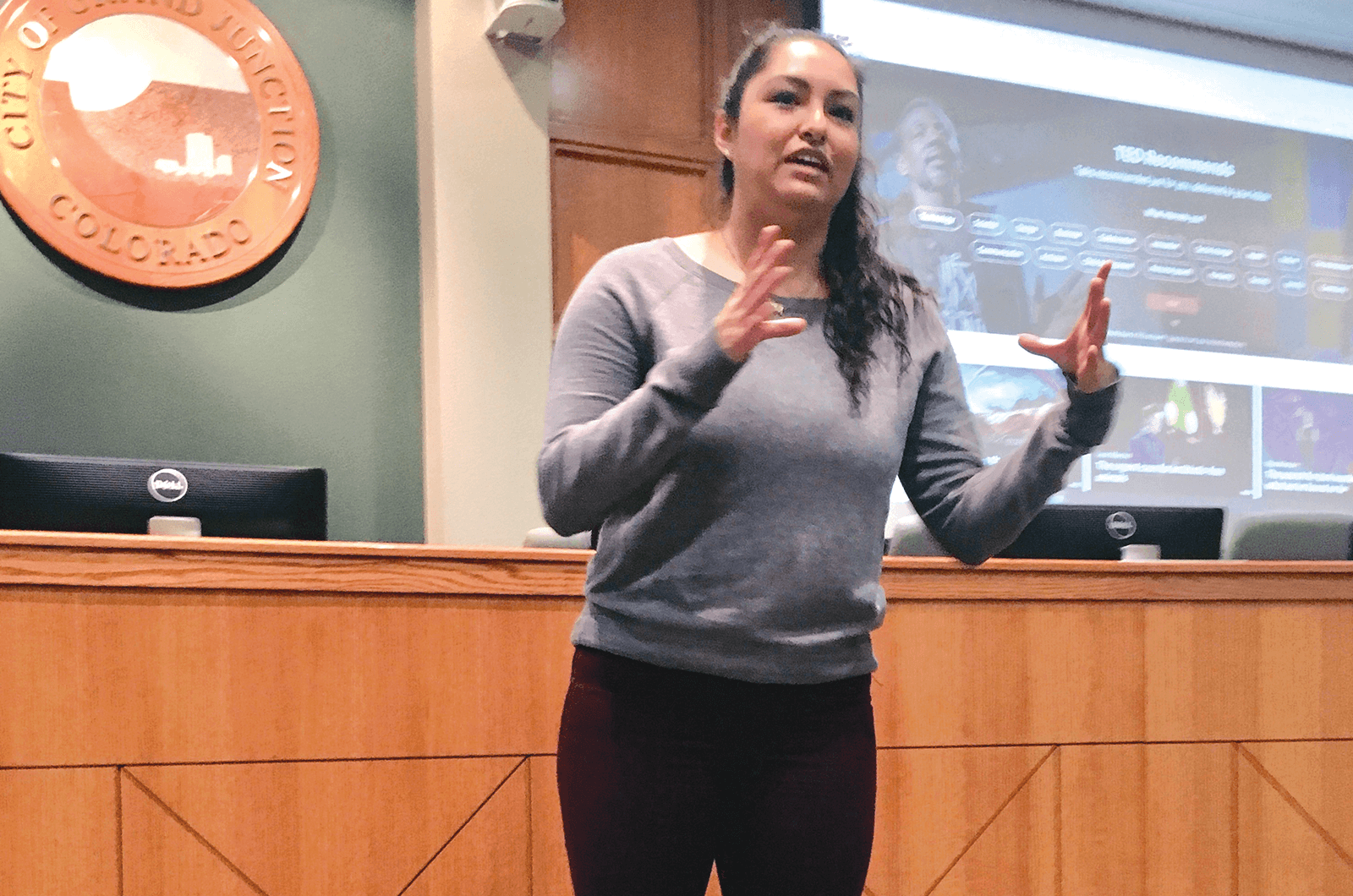 Megan Rubalcaba, now 19, began participating in the Grand Junction Toastmasters Youth Leadership Program when she was 13.

Club members have held the YLPs—which continue to serve the area’s same youth populations—at the local public library every year. The youth librarian helps promote the program in visits to local schools and homeschooling groups.

Palmer Meyers was 12 when he signed up for the club’s YLP for the first time. Now 19, he attended the program every year until graduating from high school, when he left the area to start college. “It helped me be a leader,” Meyers, who studies aviation, says of the program. “It helped me be more confident in front of my classmates, giving presentations. And it’s helping now with my public speaking class in college.”

Megan Rubalcaba was 13 and experiencing difficulty adjusting to a new school when a school counselor recommended she attend Grand Junction’s YLP. “I was really nervous walking in,” Rubalcaba recalls. “I didn’t know it was public speaking, but it’s what I needed. I didn’t know I needed it. It turned out to be good for me in the long run. Everyone was so kind, open, and vulnerable.”

She says her mom listened to all her speeches and gave her tips. “I remember my dad telling me how brave he thought I was, how proud he was of me,” says Rubalcaba. “It brought us closer together.”

After attending the YLP for a couple of years, Rubalcaba asked Watson if she and Meyers could direct the program, which the two teens did for the next three years. Watson and Toastmaster Debbie Kemp—a member of the nearby Talk of the Town Toastmasters—helped facilitate the meetings.

Rubalcaba says she recognized herself in the new students and had ideas on how to help them break through their shyness. She initiated warmup exercises to help students loosen up and become acquainted with one another. She and Meyers delivered demonstration speeches and helped students form ideas for writing their own speeches, which participants presented weekly.

Currently a 19-year-old sophomore at Baylor University in Waco, Texas, where she’s studying to become a math teacher, Rubalcaba says she plans to seek out a Toastmasters club in that city to join later in the school year. She also says she’d like to start a YLP in Texas when her schedule allows.

As a YLP organizer, Kemp says giving students feedback is a key part of the program. They draw on the “sandwich” method used in Toastmasters evaluations. “Our philosophy is to tell students two things they did well, and give just one thing to work on,” Kemp notes. Parents, friends, and other family members are invited to attend the final YLP session to help celebrate their children’s accomplishments. 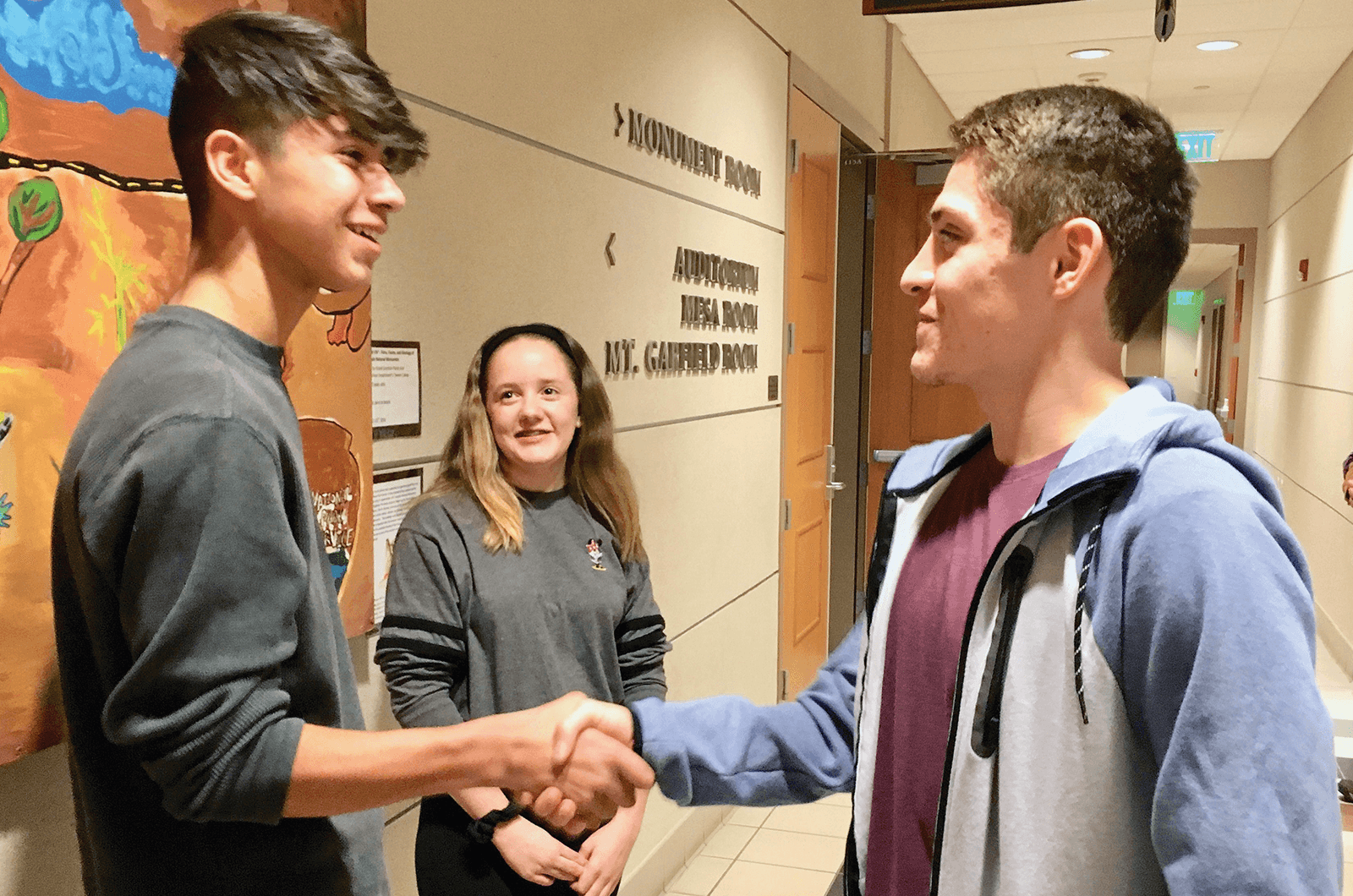 Without question, leading youth program outreach has inspired many members of the Grand Junction Toastmasters. Club member Rebecca Mullen, who became involved with the YLP after observing a session, says, “It was wonderful to watch the young people come out of their shells, and to watch a very shy and nearly wordless young woman begin to tell more and more of her story. For me personally, the more activities like YLP I became involved with, the bigger my vision became of Toastmasters.

“The only way to grow as a leader is to take on leadership roles. That’s what gave me the confidence to put together my own TED Talk,” she says.

The club has also helped organize TEDx Grand Junction annually for the past several years. In addition, the group organized its second annual TED-Ed Club—for youths ages 13-18—in October 2019. TED-Ed is TEDx’s youth and education initiative, aimed “to spark and celebrate the ideas of teachers and students around the world.”

The Grand Junction club is clearly poised to inspire new leaders for the foreseeable future, especially as it continues to participate in community-based Toastmasters programs such as YLP. Megan Rubalcaba can testify to that.

“Youth Leadership has shown me a part of myself that I didn’t know I had,” she says. “I’m normally a reserved person, but in Youth Leadership I came alive, like I was a different person—still me, but more outgoing and creative.”

HOW TO START A YLP


Sharon Sullivan is a freelance writer based in western ­Colorado. She was introduced to Toastmasters 20 years ago after attending a Speechcraft course.
Next Article 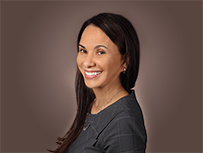 HOW TO START A YLP

Toastmasters know just how valuable communication and leadership skills are. Imagine honing those skills as a youth—and the kind of head start it would give you in life.

If your club would like to sponsor a YLP, here are some details about the program:

If you are looking for a YLP, contact Toastmasters clubs in your area to ask if any of them plan to present the program or have an interest in doing so. (Because YLPs are sponsored voluntarily, Toastmasters World Headquarters does not have official information on available programs or which clubs offer it.)

To search for local club listings, go to the Find a Club section on the Toastmasters website.

Go With a Gavel Club

To learn more, go to the Toastmasters website. You can also contact the New Clubs team at World Headquarters at newclubs@toastmasters.org with any questions.

Interpersonal Communication is a community-based program, but unlike the YLP, it doesn’t need to be presented by Toastmasters members.

The program helps teenagers build stronger listening and communication skills while understanding their own communication style. Materials are designed to be used by teachers or other adults who mentor teens, such as youth program administrators, guidance counselors, community religious leaders, and others.

Program leader and participant manuals can be purchased through the Toastmasters online store.

The manuals cover effective listening, effective expression, and effective communication. Activities, which include role-playing, are designed to be accessible and realistic to teens.

One section encourages young people to discuss shared experiences—and how they felt, thought, and behaved in such situations. The goal is to practice empathy. Suggested scenarios include:

Another Toastmasters outreach program is Speechcraft, which is aimed at adults and is an excellent membership-building tool. Through that six-week course, clubs can introduce community members to Toastmasters and the fundamentals of public speaking. To learn more about the community-based programs, visit the Toastmasters website.