I could hear the words of encouragement coming from an audience of thousands when I was giving the keynote speech at the 2016 Toastmasters International Convention in Washington, D.C.

“Come on, Ed, you can do it!” “Take your time. You can remember your speech!”

It was my worst fear. It was every speaker’s worst fear: I forgot my opening line. I blanked out … for over seven prolonged and painful seconds. Seven seconds of terror.

This had never happened to me before. My panic rose as thoughts swirled in my brain: I am in front of a live audience of over 2,000 people; thousands more are watching online via streaming video; to top it off, I am a World Champion of Public Speaking, and this definitely shouldn’t be happening!

I had been thrilled five months earlier when I was asked to be the keynote speaker. This was my moment to thank Toastmasters for a career I love and for completely changing my life. Since winning the World Championship of Public Speaking® in 2000, I have become a full-time professional keynote speaker and executive coach. I help organizations and individuals win high-stakes sales presentations. I’ve spoken around the world in 25 countries and on five continents. I met my wife in South Africa, and today we have a beautiful daughter. This would be my moment to thank the organization.

But still, I was nervous. Yes, Toastmasters helped launch my career. However, this audience would have tens of thousands of evaluators! I prepared for this keynote speech as intensely as I had for the World Championship. In fact, I felt more pressure for this one. In 2000, there were no expectations. No one knew who I was. This time, it was different.

I wanted people to remember this speech, not because a world champion had lost his place but because they had a memorable experience.

As my memory faltered and I stood on stage in silence, judgments swirled in my brain: This blunder will ruin my reputation around the world! I will never recover from this! Yet somehow, miraculously, the following happened:

So what made the difference between how the speech began and how it ended? And why did that painful beginning happen in the first place? Looking back, I realize I made three critical mistakes. But then I turned it around and took three corrective steps to right the situation.

My regular day-of-speech routine is to rehearse backstage until I’m called up on stage. However, on this occasion, I was asked to take photos with the media. Afterward, Toastmasters audience members began to line up, and I wasn’t going to say no. Before I knew it, the Opening Ceremonies had started. My wife and I were seated in the front row, center. I knew if I left, it would be noticed, and I didn’t want to be rude. So I stayed, committing my first critical mistake: breaking my preparation routine.

The opening act was a group that performed music and sketch comedy. Their performance was amazing, and the audience’s energy was soaring. I thought to myself, I have to follow this! I then committed the second critical error: I began to play the comparison game.

I was so distracted by their presentation, I lost focus on my own. To keep up the audience’s energy and transition to my presentation, I decided to comment on something in their performance. In their program, they had referred to a “power stance,” and I went with that. I had now committed the third critical error: I shifted my focus from my presentation to theirs.

I’m introduced. I take the power stance. I get the laugh … but forget my opening line. Seven long seconds follow.

At first, I panicked. Then I took a deep breath, and my preparation kicked in. I remembered not only my opening line but my entire speech.

I made three corrective shifts to regain my footing.

After a few deep breaths, I started to refocus.

I refocused the attention away from myself and to the audience. I tried to move away from the disappointment I was feeling in myself and instead focus on why I was there and why people chose to hear me speak.

I decided to approach the speech differently. Rather than focusing on delivering a memorized speech, I began thinking of the presentation as a conversation with 2,000+ of my best friends. If you’re talking with friends, you rarely, if ever, memorize what you’re going to say, and you certainly don’t follow a word-for-word presentation. This “mindset-shift” technique has changed the way I speak forever.

Once I made those corrections, I immediately relaxed and found myself in a state of flow. I wanted people to remember this speech, not because a world champion had lost his place but because they had a memorable experience.

Rather than focusing on delivering a memorized speech, I began thinking of the presentation as a conversation with 2,000+ of my best friends.

I recently asked someone who was in the audience that day, my friend Mark Brown, who is also a Toastmasters World Champion of Public Speaking and a previous International Convention keynote speaker, what went through his mind as he watched my struggle.

“I remember feeling fear, concern, pain, and worry. I remember saying to myself, ‘Come on, Ed. Relax. You know this. Just take a breath, find your place in your script. You will be fine.’”

He added, “The audience was so supportive, and I felt them willing you to succeed. I was particularly impressed with the calm and professional way in which you interacted with the audience when you asked, ‘Have you ever done this?’ Then you composed your thoughts and continued to the end without any more ‘hiccups.’”

So, yes, I forgot my opening line in front of over 2,000 people. I didn’t die. It wasn’t fatal. In fact, forgetting my line had many positive unintended consequences that I never imagined. If I can make a mistake like this and live to write about it, you can too.


Watch the video below of a man who blanks on his presentation as he pitches his company to ABC's Shark Tank investors.

Ed Tate is an award-winning international keynote speaker and the 2000 World Champion of Public Speaking. Since 1998, Tate has helped corporations, entrepreneurs, speakers, and salespeople hone their presentation and speaking skills. Find out more at www.edtate.com.
Next Article 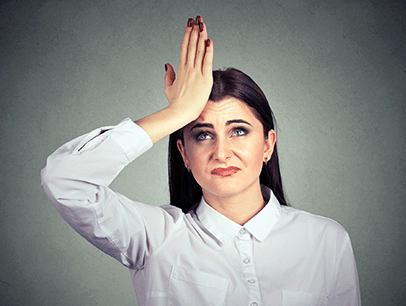 What Was I Saying?

What to do when your train of thought is derailed.

How to memorize most or all of your speech.

The thought of forgetting your lines strikes fear into speakers and actors everywhere. Preparing, practicing, and finding a good routine can help prevent a memory lapse. Here are a few tips from Toastmasters experts.

After his memory lapse on stage, Ed Tate developed a technique he calls “The Tate Rapid-Recall Technique” (or “what to do when you forget your lines”) to help others in similar situations. Among his suggestions:

Veteran speech coach Darren LaCroix, 2001 World Champion of Public Speaking, also recommends putting in plenty of practice beforehand and giving your speech out loud more times than you might think necessary. His other tips include: