No matter what club you visit in Northern Ireland or just over the border in the Republic of Ireland, everyone seems to know Stephen Morrow. So says Alison Matthews, who is Morrow’s mentee in the Lagan Valley Toastmasters in Lisburn, Northern Ireland. Morrow chartered the Lagan Valley club, and has mentored and cajoled hundreds of “unsuspecting” people into becoming better communicators and leaders, says Matthews. Morrow has been president of the Lagan Valley and Belfast Toastmasters clubs, and as area director, organized the annual district conference in Belfast in 2014—a time when many people were reluctant to attend due to political tensions in the area. Matthews says it was the best attended conference in years.

Alison, what is the best advice Stephen gave you?

“Get over yourself, get out of your chair, get onto the floor, and say anything!” During my first three visits to Lagan Valley Toastmasters, I was planted to my seat and terrified he would even say my name. After I signed up, Stephen told me gruffly there was no point in paying my membership if I were to remain silent for the rest of the year, so I was to get up and say anything. Now he can’t get me to shut up!

What characteristic does Stephen possess that you hope to emulate?

Stephen is always thinking of how he can bring his Toastmasters communication and leadership skills to others. He took Toastmasters into his former secondary school in a socially deprived area of Belfast and has now successfully run a Youth Leadership Program for the last four years. At our last meeting, four of those students (two of whom are refugees and just learning English) came and gave their speeches to us. For the past three years, Stephen organized a sort of cross-border “walk and talk” meeting where members of a few nearby clubs walk up a mountain and have a full-blown Toastmasters meeting, much to the surprise of the other walkers we meet! Aptly, our Word of the Day for our recent walk was “ambulate”!

How did Stephen become your mentor?

It kind of happened organically, as Stephen was self-employed and understood the difficulties I faced being newly self-employed with no clue as to how to pitch myself and my business and network. He pushed me to do my best and forced me outside of my comfort zone. In 2016, I entered a Women in Business pitching event. Stephen and the rest of my club gave me great feedback before the event, and I won prize money for my business! Stephen has always been self-employed, so he understands all the challenges and the importance of getting a clear message across on social media and in person.

How would you describe Stephen?

Stephen is a straight-talking legend. He doesn’t believe in gray—everything is black and white. But at the same time, he is very kind and supportive, and even with his brutal honesty he can cushion evaluations to motivate you and help you learn. I joined Toastmasters as a new business owner who was terrified even to stand up for one minute to talk about my business at networking meetings. Thanks to Stephen and his “gentle” pushing over the years–and the support of the other former presidents–I became the first female president of Lagan Valley Toastmasters. I am now doing roadshows with three other people in my industry. If Stephen hadn’t pushed me that night, I might still be at home sitting on the sofa dreaming of the things I could achieve. Instead I’m achieving them!


Nominate your mentor by emailing your story and a photo (1MB or larger) to MentorMoment@toastmasters.org.

LOOKING FOR A MENTOR IN YOUR CLUB?
Ask your vice president education who is available to mentor you. To start a mentoring program in your club, order the Club Mentor Program Kit (Item 1163). 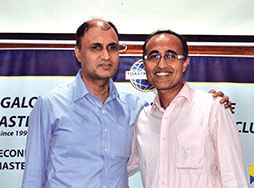 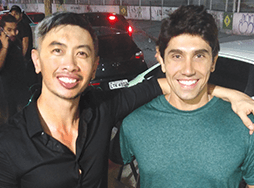