February 2023 View PDF
Shailee Basnet stops to pose for a photo at Mount Everest Base Camp.
Next

For many, climbing the world’s highest mountain might be the pinnacle of achievements—but not for Shailee Basnet. Since the Nepal native climbed Mount Everest in May 2008, she’s reached even higher points in her life. After conquering Everest, Basnet helped form the Seven Summits Women Team. Four and a half years later, she and her teammates became the first women’s team in the world to climb the highest peak on each of the seven continents: Everest in Asia, Mount Kosciuszko in Australia, Mount Elbrus in Europe, Mount Kilimanjaro in Africa, Mount Aconcagua in South America, Mount Denali in North America and Vinson Massif in Antarctica.

Between ascents, Basnet accomplished other goals such as becoming a motivational speaker and stand-up comedian. Today, the 35-year-old gives speeches at conventions, seminars and schools all over the world. In 2017, she spoke at the Toastmasters International Convention in Vancouver, Canada, about her experiences climbing some of the tallest mountains on earth, the challenges she and her teammates faced, and the lessons they learned.


Basnet’s experiences—both on and off mountains—are central in her comedy as well. “I want to … use my comedy to share the incredible journey I’ve been on, to share the power and joy of all these amazing female superheroes, my wonder women, that I work with,” she says.

Basnet has been producing and performing her own comedy shows at restaurants, hotels and other venues in Nepal since 2011. She also performed at comedy showcases and clubs in Colorado—where she and her husband live for part of the year—and most recently in New York.

Basnet, CC, says her Toastmasters training helped her become a motivational speaker and gave her the confidence to pursue stand-up comedy. “If I didn’t have the Toastmasters platform, I don’t think I would have had the courage to write a script and go onstage and invite people to watch me,” she says. “Toastmasters is like the complete foundation—my base for my stand-up journey.”

Before Basnet was cracking jokes onstage or climbing mountains, she was a journalist covering youth and social issues in Nepal. While she says writing is her first love, she always longed to do something more active. “Basically, all my childhood, I did not play any sports, because my school did not have any, particularly for girls,” says Basnet, who grew up in Kathmandu. “So one of my childhood wishes was to be physically active.”

When Basnet heard about the First Inclusive Women Sagarmatha Expedition, an all-Nepali female expedition to climb Mount Everest, she was intrigued. At first, though, her inexperience in sports caused her to doubt whether she should join. “I asked myself whether I was qualified even to go near a mountain,” she jokes. Fortunately, the expedition was the culmination of a nearly yearlong program that included 45 days of intense mountaineering training in the Himalayas. “Once I found that out, I was in,” Basnet says. “I went for that training and never looked back.”

The goal of the women’s expedition “was to open up access to mountaineering for Nepali women—to encourage more Nepali women into mountaineering,” ­Basnet says. At the time, only seven Nepali women had climbed Mount Everest, while hundreds of women of other nationalities had, Basnet says. “In Nepal, because of serious social economic factors, [mountaineering] is definitely an unconventional and very nontraditional path for women.” As such, the expedition was frowned upon by many. “We were called a lot of different names,” Basnet says. “We were told this is an over-ambitious project, a suicide mission, that a few of us were going to die for sure, that not more than one or two of us would make it … and it was difficult for people to accept and understand that a group of women could do this.”

“If I didn’t have the Toastmasters platform, I don’t think I would have had the courage to write a script and go onstage and invite people to watch me. Toastmasters is like the complete foundation—my base for my stand-up journey.”

Basnet says attitudes changed after she and her teammates became “the most successful women’s team to be on Everest,” with all 10 members making it to the top—a feat Basnet says is rare in mountaineering. “Everybody was like, wow, this is amazing, and society needs to learn from it,” Basnet says. “When we came back, the scene had definitely changed. Since then, almost every year, there has been at least one or two young Nepali women going up Everest.”

After the expedition, Basnet and some teammates founded the Global Inclusive Adventure Organization (GIA), a nonprofit non-governmental organization. Wondering what else they could achieve together, they set their sights on conquering the rest of the world’s tallest mountains, and the was born.

Basnet and her teammates completed their mission in December 2014, when select team members scaled the final summit: Mount Vinson in Antarctica. Basnet personally climbed to the peak of Everest, Kosciuszko, Elbrus and Kilimanjaro. “Our goal was even if one person makes it to the top in each of these continents, we were a successful mission,” she says. 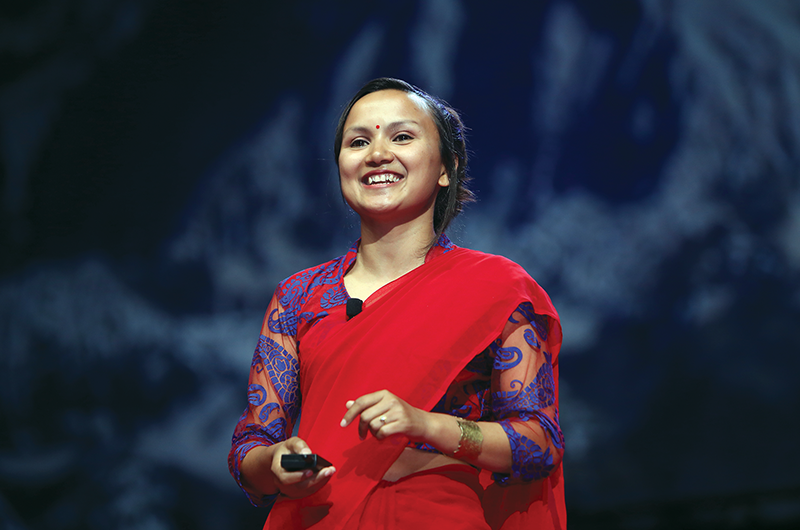 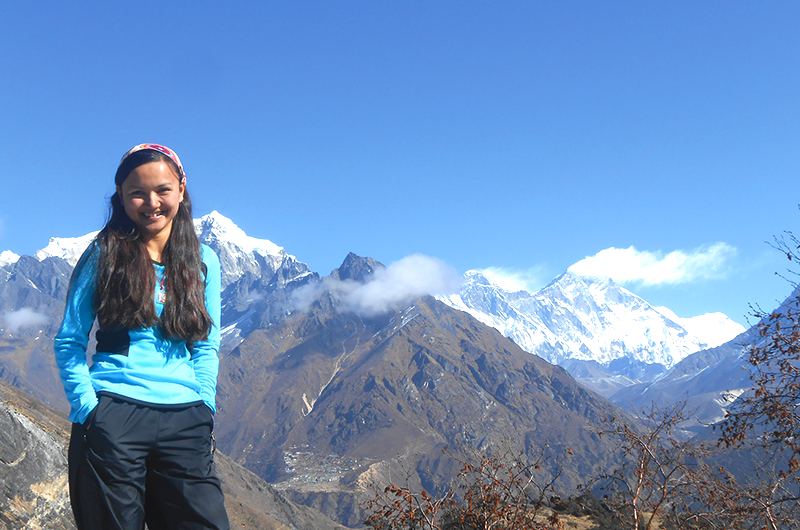 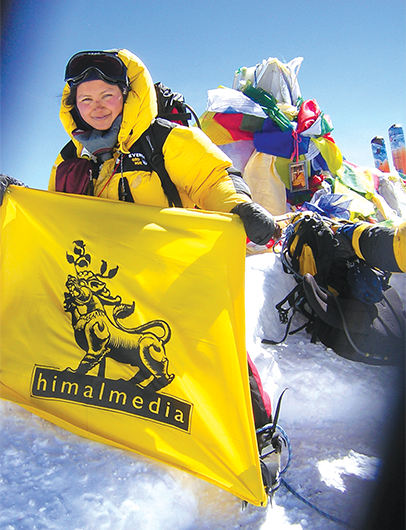 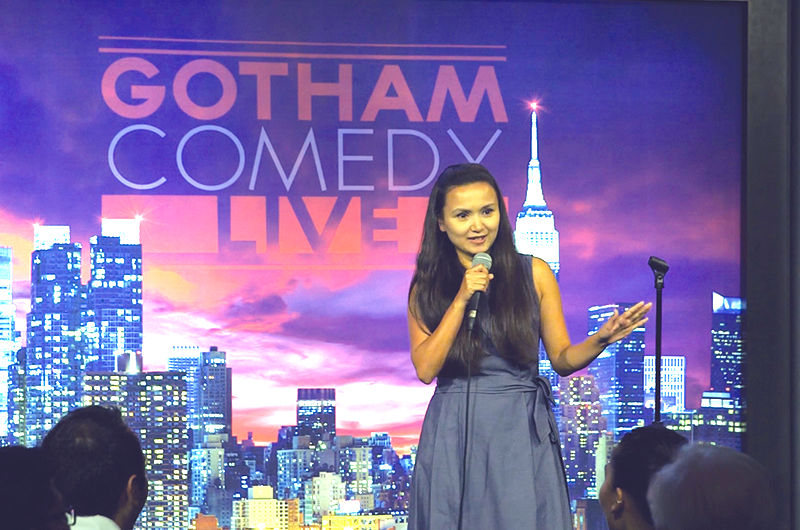 After the First Inclusive Women Sagarmatha Expedition, Basnet and her teammates began receiving invitations from schools, organizations and corporations to speak about their experiences. She realized that others wanted to hear about her experiences and lessons learned.

Supported by the United Nations, which was one of the expedition’s major sponsors, the women visited more than 150 schools in Nepal and more than 200 schools abroad. “That was, after climbing, the second-best experience—to be able to share our experience and lessons, flaws, faults, mistakes, achievements … with young minds who are still figuring out what they might want to do with their lives,” Basnet says.

While Basnet initially saw motivational speaking simply as a platform to share her stories and lessons of empowerment, over time she saw it as something from which she could build a career. She followed a similar path with stand-up comedy.

When she first became interested in stand-up, Basnet wasn’t sure whether people would find her funny. In 2010, she joined the Everest Toastmasters club in Kathmandu to test her material.

Nepal doesn’t have much of a stand-up comedy culture, says Basnet, so Toastmasters meetings gave her a weekly platform where she could crack jokes. “Seeing if people found me funny was my biggest motivation,” she says.

Although she was an experienced speaker prior to joining Toastmasters, Basnet realized how much she still had to learn. “I was a little bit full of myself,” she admitted. “I love speaking; I love being on stage.” Basnet’s story, rather, is of a dynamic speaker who, through hard work, became even better, a sentiment echoed by those who’ve watched her grow. Richard Ragan is a United Nations diplomat who supported the First Inclusive Women Sagarmatha Expedition. He says, “I’ve put her in a movie, given speeches standing beside her, and watched her stand in front of scores of people and talk passionately about her dreams and accomplishments. I’ve seen her grow from being good to great. She is a natural leader and someone who is going to achieve tremendous things throughout her lifetime.”

“I want to … use my comedy to share the incredible journey I’ve been on, to share the power and joy of all these amazing female superheroes.”

Maya Gurung, one of Basnet’s Seven Summits teammates, praises Basnet’s ability to connect with audiences. “She is a master at deep connection, whether it is through her motivational talks or as a comic,” Gurung says. “I’ve heard her share my own story several times, and it still gives me goosebumps and makes me tear up even after 10 years.”