At age 7, Meera Manek’s family moved from her birthplace of Nairobi, Kenya, to the United States. Manek’s father was inspired to pursue the proverbial American Dream in order for her and her sister to follow educational, career and life opportunities. Like many immigrants, she says she struggled to fit in as an Indian with East African roots growing up in Southern California. But she understood the opportunity her parents were trying to present, so she instead focused on being a well-rounded individual by joining the Girl Scouts, school sports teams, theater and eventually, Toastmasters.

“I developed a sense of leadership in these activities and an understanding of my own capabilities as a leader, which now extends into my personal and pro­fessional endeavors,” Manek says.

Her interest in public speaking began when she won a speech contest in high school. The judges were from a local Toastmasters club, and, at their encouragement, Manek joined a local club when she turned 18.

Today, Manek, 36, is a speechwriting and public speaking coach in the Los Angeles area. When she’s not busy consulting, she finds her way to the stage as a stand-up comedian. A member of the Warner Bros. Toastmasters club in Burbank, Manek, ACS, CL, continues to nurture her speaking and leadership skills as well as help others feel empowered.


How did you adjust to a new country as a child?

When my family arrived in the U.S., it was a challenging, strange and rewarding experience adapting to a new life, systems and culture. I can’t imagine how difficult it must have been for my parents to navigate such an experience. My sister and I adapted quickly. We watched a lot of television to understand what it meant to be an American. We also participated in “American” activities and experiences like school plays, after school sports, Fourth of July at Angel Stadium and Disneyland visits. My family and I lived in Fullerton, where I grew up before moving to Irvine to pursue my undergraduate studies at the University of California, Irvine.

“It’s the joy of my life to make people laugh, so when I first tried stand-up comedy, I just knew that it was for me.”

How did you get started in speechwriting?

I began my career as a political organizer and always gravitated toward developing skills in speechwriting, public speaking, leadership and service. While studying for my master’s in business administration at the Kogod School of Business at American University in Washington, D.C., I also studied political speechwriting with speechwriters who, most notably, had worked in the Clinton-Gore Administration. I studied all elements of speech writing and public speaking, including understanding the audience, use of language (anecdotes, evidence, wit, humor, sound bites and using memorable language), and delivery. Upon completion of the class, students were so well prepared that they’d often be hired to join the communication team for a member of Congress. One student eventually became the British Ambassador’s speechwriter. I was selected as the graduation speaker for my MBA class and incorporated what I had learned to make it a memorable speech.


What do you do for a living?

As a speechwriter, I have coached, collaborated and worked with CEOs, nonprofit executives, entrepreneurs, real estate agents, politicians, engineers, city planners, fitness instructors, clergy, actors, students, and entertainment, business and sales professionals. I have also spoken to numerous audiences, large and small, either as a speaker, facilitator, master of ceremonies or stand-up comedian. Notably, I have written speeches for the executive director of the American Civil Liberties Union of Southern California and the two-time Oscar-nominated costume designer for the movies Malcolm X and Selma.

When I meet with a client, I work like a doctor diagnosing a plan of action in regard to speech development and delivery. I want to bring out the best in people by leveraging what they do well and help them improve messaging, stage presence and delivery. I enjoy helping people of all ages discover the storyteller within and the message they are meant to share, and help them craft and share it in a way that leaves the audience moved with emotion and inspired to take action. When I coach workshops and young women approach me after the session to say “thank you,” and “ I didn’t know I could have a voice,” I am reassured that I am doing exactly what I am meant to be doing. 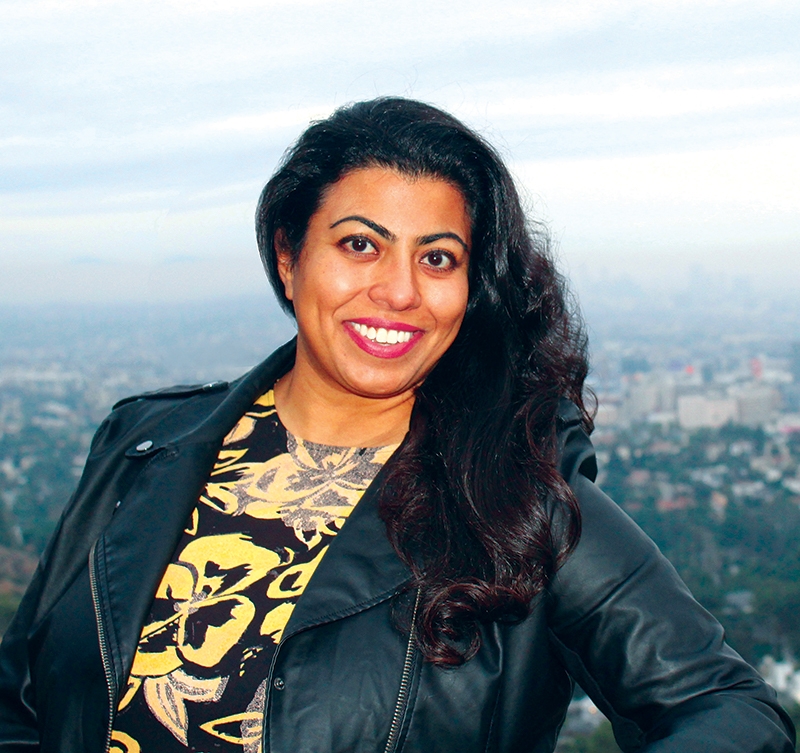 You also work as a stand-up comedian?

It’s the joy of my life to make people laugh, so when I first tried stand-up comedy six years ago, I just knew it was for me. I’ve had incredible moments performing onstage and I continue to grow, nurture my point of view and develop as a comedian. It’s helped me become a better performer, speechwriter and observer of the world. Stand-up comedy has helped me better understand the audience’s needs and wants and learn how to deliver that for both my client and my audience.

“When I meet with a client, I work like a doctor diagnosing a plan of action in regard to speech development and delivery.”

What do you talk about in your comedy routines?

Stand-up comedy is usually about what’s going on in the comedian’s life. In my routine, I talk about my life: people being confused looking at me and trying to figure where I am from, growing up as an Indian/Kenyan immigrant in the U.S., my extended family, being a woman, my super-competitive yoga class and cultural, political and topical material.


Have you ever “bombed” onstage?

Like with public speaking or in Toastmasters, if you don’t prepare you could very well bomb. I had such an experience, but not in comedy. I hosted a cultural event and was given the information about participants and the event a day before. It wasn’t enough time to learn the correct pronunciation of names containing 16 letters. When I started fumbling, I was booed and that caused me to get nervous and fumble even more. It was an awful feeling; I wouldn’t wish it on anyone and always encourage preparedness. The experience made me a better, more empathetic audience member. The booing wasn’t well received by other audience members and the person who made the disruption did eventually come backstage and apologize. The experience also made me a much stronger comedian and public speaker by helping me to let go of the fear of ever “bombing.”


How can someone begin performing comedy?

Go to open mics or take a class. Stand-up comedy is about getting back up again, so don’t be afraid. Work on preparation. Preparation in writing and rehearsing your own jokes, studying comedy, and preparing your mind are all key to getting over the fear and being confident onstage.


What advice do you give your clients?

The most important advice I give to clients is to be their authentic self. A speaker who is personable and vulnerable is empowered and you can only be that way by telling your own story and not someone else’s. Audiences can tell right away when someone is not being authentic, and it diminishes the speaker’s credibility. I also emphasize not to underestimate the preparation time needed to deliver an incredible presentation. Give yourself at least three weeks to allow for inspiration, writing and rehearsing.


Learn more about Meera Manek by visiting her website.