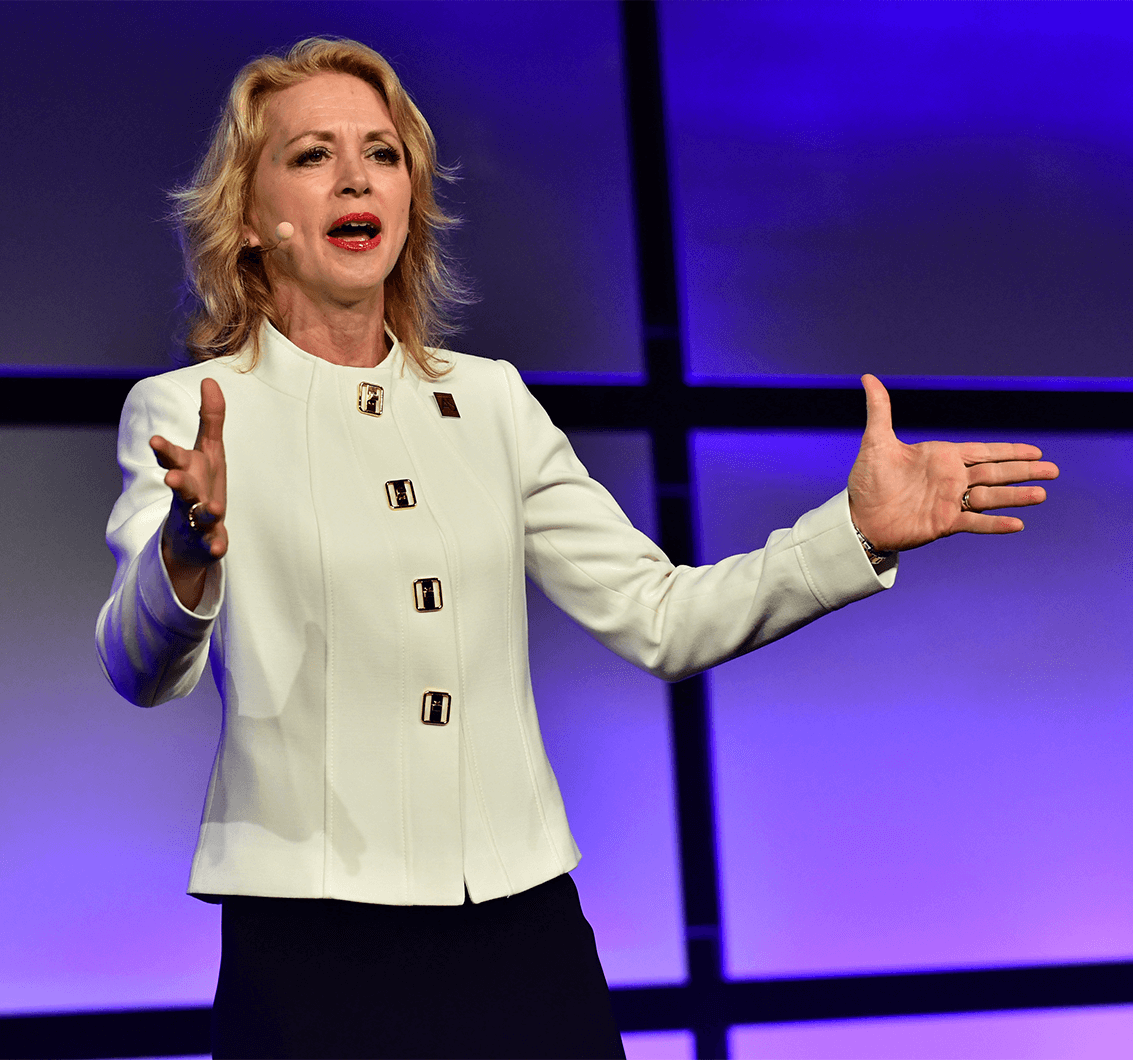 The conference hall buzzed as we awaited her arrival. Stacks of books sat ready for signing. Drinks flowed freely at the bar. When she finally entered, we all vied for a glimpse. “I’m going to make this as interactive as possible,” said our keynote speaker, joking comfortably with the people nearby. She gave the impression of supreme confidence. It all seemed so natural.

To a new Toastmaster, this type of performance may seem out of reach. It’s easy to assume that speakers who exude confidence are just born with something special. But just as actors adapt their behavior and mannerisms to play different parts, we too can learn to shape the impressions we make on others. Stage presence is a learned skill, for which many would-be leaders seek expert coaching. Here are some important techniques regarding body language, a key component of “executive presence.”

In our daily lives, we naturally try to manage the impressions we make on others—adapting our behavior to fit the situation and elicit positive perceptions. This can be seen in something as simple as choosing a flattering photo for LinkedIn or dressing up for an interview.

Researchers have studied this phenomenon at least since 1959, when sociologist Erving Goffman published his classic book The Presentation of Self in Everyday Life. In it, Goffman likens our natural efforts at impression management to a dramaturgical performance, in which we follow certain scripts for certain situations. For instance, when we visit a restaurant, we expect the waiter to act like a waiter, politely taking our order. Back in the kitchen, he may drop his game face. There’s a front stage and a back stage in Goffman’s analogy, and we seamlessly move from one to the other.

“A key characteristic of executive presence is deliberateness.”

Similarly, executive presence is a type of impression management, with a script based on preconceived notions of how an executive should behave. A key characteristic of executive presence is deliberateness. It’s common to think that leaders should speak and move with purpose. Each gaze should be meaningful, each gesture directed. The idea behind executive-presence training is that, if we develop the mannerisms of a leader, we’ll be perceived as such. Our audience will take these outward signs as cues to credibility and strength.

1 Leadership Gaze—When speaking to a group, focus on one person at a time for the length of a thought. When there’s a natural pause (e.g., at the end of a phrase), shift your gaze to someone new. San Francisco–based SNP Communications advises speakers to avoid sweeping the room with their eyes or letting their eyes dart up to the ceiling or to the side, which may signal uncertainty. If your lips are moving, your eyes should be locked onto someone else’s. This type of eye contact is more deliberate and longer lasting than what most speakers are accustomed to. It’s also harder to maintain, because it feels too long.


2 Resolute Stance—Plant your feet shoulder width apart when you’re speaking. Avoid shifting from side to side. Also avoid pacing or speaking while walking. If you want to move to another area of the stage, walk there purposefully, plant your feet and make eye contact before you start speaking again.

To better understand stance, I spoke with James Vincent Meredith, an actor with Chicago’s Steppenwolf Theatre. He’s played many leaders during his career, including such legendary figures as Othello. “When I was younger, I tended to pace a lot, because I thought that was a way of showing my power,” says Meredith. But he eventually realized, “Moving around seems to signal a bit of unsettledness, a bit of uncertainty.”

Meredith adds, “Your real power comes from keeping your good posture, not shifting weight and not being afraid to simply just stand.”


3 Emphatic Gestures—Use gestures for emphasis. Bring both hands up ­simultaneously with open palms facing each other (as if you were holding a large ball). Gesture symmetrically, as though setting the ball down on important words. John Neffinger and Matthew Kohut, authors of Compelling People, refer to this style of gesturing as the “magic ball.” I call it the emphatic style, to distinguish it from the dramatic style, in which speakers use their hands and bodies to act out scenarios. It also differs from the orchestrated style, in which TV presenters use set pieces like the “spider on the mirror” (hands facing each other, fingers touching and pointed downward). The dramatic style may be unseemly for a leader, and the orchestrated style may come across as phony or stilted.

When you’re not motioning, keep your hands comfortably at your side. Avoid clasping them or placing them in your pockets. Eliminate extraneous movement like the “washing machine”—when your hands go around and around as you reach for words. Also avoid defensive postures (arms crossed). Again, this is harder than you might think, because it feels rather exposed to leave your hands at your sides.


4 Vocal Vigor—Be loud enough that people in the last row can easily hear you. This may feel embarrassingly loud, but sound dissipates quickly in a big or carpeted room. To project your voice to the last row, you have to breathe and speak from the diaphragm. Practice by placing your hand on your stomach and taking a deep breath so your diaphragm expands. Use this air to support your words. Speaking loudly has the added advantage of forcing you to emote, according to SNP Communications.


5 Focused Feedback—Because impression management is central to professional presence, feedback is critical. Most trainers incorporate some combination of peer review and video recording. “We’re looking at how people react,” says Don Kaufman, co-founder of coaching firm The Kaufman Partnership, based in Philadelphia. “We videotape people so they can see their leadership presence, how they are in terms of the way they speak to people.”

Video is particularly useful for spotting uncontrolled gestures and eye movement. In time, we can become more aware of what we’re doing in the moment and coach ourselves to more useful behaviors.

To be sure, executive presence is only one style of self-presentation, and it’s not appropriate for every public-speaking situation. For instance, comedians often display frenetic energy during their performances. Some have built careers on nervous tics and neuroticism (I see Rodney Dangerfield adjusting his tie right now). These status-lowering signals tell the audience that the speaker can’t be taken seriously.

“The idea behind executive-presence training is that, if we develop the mannerisms of a leader, we’ll be perceived as such.”

In addition, leadership scholars are quick to point out that true leadership doesn’t reside only in mannerisms; presence of mind, respect for our listeners and good ideas are just as important.

But there’s nothing wrong with enhancing our performance through practice. As Kaufman says, “People are already managing their impressions, but the way they manage them may not be in their best interests.” As with most things in communication, it all depends on the goal and the audience. We’re most credible when we fit audience expectations.

Making a strong impression is within your reach!