Educator and speaker Marc Williams, ACS, ALB, on realizing one’s potential and teaching others to do the same.


Walking down the hall at the Secondary School for Journalism in Brooklyn, New York, Marc Williams, a fairly new principal, was eager to share some exciting news with his superintendent. One of the school’s graduating seniors earned a coveted POSSE Scholarship, a noteworthy achievement for a student attending a historically struggling school. Applicants must demonstrate public speaking, listening, negotiation, and leadership skills. Statistically, only about 5 percent of nominees across the United States earn the four-year college scholarship.

But the news did not stop there. The students in the Advanced Placement Computer Science class, a course that hadn’t previously been offered at this historically low-performing school, developed an app to address the issue of surplus food being trashed in an area with a hunger problem. A student who may not have a meal to eat after the school day can use the app to locate a participating restaurant that will prepare a bagged meal for the student to take home. The team entered the app into the Samsung Solve For Tomorrow competition for a chance to win a 150,000 technology grant. In April 2017, this group of young computer techs from the typically underfunded school became one of three national champions and officially launched their MOESY app that summer. As the school’s principal during that time, Williams could not have been prouder. 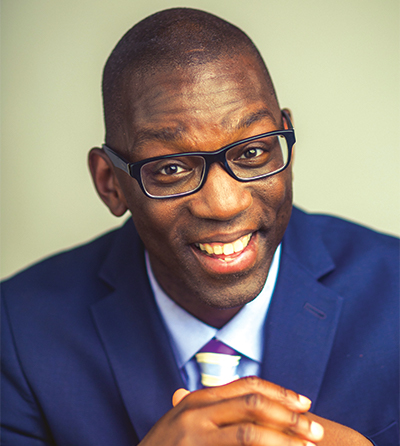 The journey to creating a positive impact began with his own inspiring story of reversing the foreboding start of a haunted past.

“His best attribute is his belief in people’s potential to grow and become better.”

Hiding underneath the pillows of a couch, at the age of 3, Williams shut his eyes tightly, trying to erase the image of his mother screaming and his thought-to-be-father suffering a tragic death at the hands of two intruders. The trauma, never to be spoken of, replayed in his mind throughout his years as a student in the public schools of New York City. Statistically, he could very well have become an incarcerated dropout. Though his single, illiterate mother could not help him with his homework, she was an inspiration to pursue a better life.

Years later, Williams graduated from New York University with a master’s degree in speech communication. His mother’s eyes welled with tears. She lived long enough to see her son become an English teacher, an after-school activity advisor and a mentor.

Williams went on to become an assistant principal serving the high-achieving students at the rigorous Brooklyn Tech high school—his alma mater. One day he was approached by a former student who told him: “You should be at another school where there are children who could use your help.”

The opportunity came when Williams received an offer from a superintendent of one of those underserved schools. Faced with only 24 hours to make a career-changing decision, Williams—a 20-year educator, six-year Toastmaster and finalist in the 2014 World Championship of Public Speaking—agreed to become the principal of a school that was in danger of closing. 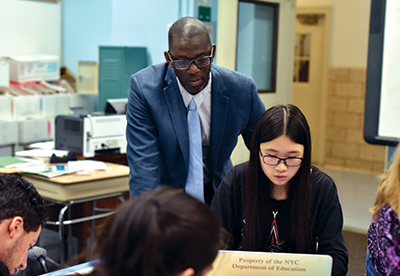 Marc Williams with students at the Secondary School for Journalism in Brooklyn, New York.

From an elite institution to a challenging environment with negative press, a revolving door of principals, and children from a zip code that match the area where he was raised, Williams took what he learned and the network he created as a Toastmaster to turn the school around. “To make the learning experience at the school better, Mr. Williams used data, enhanced critical thinking, and was open to suggestions from the community,” said chemistry teacher Annabel Dsouza.

Williams increased the school’s graduation rate; galvanized the staff, students and parents; and created a new vision as a school for journalism and communications. “His best attribute is his belief in people’s potential to grow and become better,” says English teacher Gerald Wagoner.

Outside of campus reads a sign: Secondary School for Journalism. Arriving on his first day, Williams didn’t see anything resembling journalism. The revitalized vision for the school was to build a premier journalism track from high school to the professional newsroom. Plans for a functional newsroom for students to learn both on-camera and behind-the-camera skills became a part of the discussion. Winning the Samsung grant could pave the way. Meanwhile, Williams worked with teachers to build journalism units within the core curriculum and furthered strategic partnerships with organizations like BRIC Media Arts and The LAMP to teach photo and video journalism skills after school hours.

“I have an aspiration of returning to the World Championship of Public Speaking finals and bringing home a trophy that I can display for my children.”

It is often expected that a principal must make major changes within three years. But those who have successfully turned schools around have attested that it takes more time. Williams has spent a lifetime turning his own life around. Using a sense of perspective and a drive that transformed the son of a mother who could neither read nor write, Williams is motivated to have the same positive impact on students.

After coaching a coworker on a presentation she was to deliver, she asked me if I had ever considered being a professional speaker. Then she lent me her collection of Want to Be a Professional Speaker? DVDs. While watching them, I noticed that all the presenters credited Toastmasters for their growth. I found the nearest club, LIU Brooklyn Toastmasters, and joined.

After my first year of membership, one of the teachers in my department commented on how I seemed more confident. Knowing that Toastmasters was the only new adjustment in my life, I credit my membership for my growth in confidence. That in turn gave me the confidence to join a team of professional development presenters. It put me at the front of the room to be seen by other educational leaders, including those at a national conference for the Association for Supervision and Curriculum Development. Months later, I was offered my position as principal. 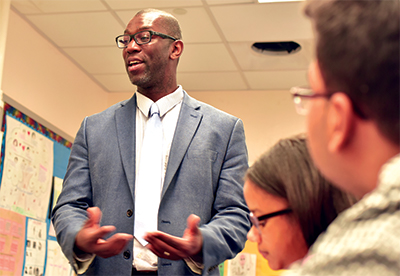 Marc Williams with students at the Secondary School for Journalism in Brooklyn, New York.

What advice would you give to someone who is faced with the challenge of transforming a difficult situation?

There are two critical components to the mindset that will help you overcome any challenge. The first is having a definitive vision for what it is that you want to accomplish. The second is the understanding that while success is never guaranteed, neither is failure. A former student revealed that as close as he got to rock bottom, what pulled him through was the belief that if you try simply to see if you can get the results you want, your efforts may lead to some surprising results.

It’s my dream to travel the world to speak on stages to help others empower their minds and equip them with the Rules of Engagement for presentations and communications. It’s the perfect combination of my two passions: speaking to inspire and educating others. The world will be my classroom. In addition, I will be transitioning from my role as principal to educate and train other educators to instill a greater impact on student achievement. I’ll be using my Toastmasters background to help educators develop self-marketing and presentation skills to secure permanent positions. The role gives me the opportunity to motivate, educate and elevate. On top of that, I have an aspiration of returning to the World Championship of Public Speaking finals and bringing home a trophy that I can display for my children, for students and for colleagues. It will be the symbol of what can be achieved and the reminder of the impact anyone can have on someone else.

John J. Glozek, Jr., ACS, ALB is a member of Huntington Club in New York and Long Island’s only advanced club, Pinnacle Speakers. He is the publisher of Golfing Magazine, the author of Business Golf: Your Key to Business Success Through Golf, the president of the International Network of Golf, and is working on being a stand-up comedian.