A New Era in Presentation Technology

In 2018, speakers are using mobile devices, 3D tools and online skills to make an impact.

The world of presentation technology is in the midst of a revolution. More speakers are using iPads and tablets to present to their audiences, using these mobile devices as a way to have “nonlinear conversations” with audiences rather than deliver formal presentations. The emergence of augmented reality and virtual reality technologies, as well as the arrival of Microsoft PowerPoint’s new 3D tools, is allowing speakers to add valuable new dimensions to presentation content and delivery styles.

In addition, as more speakers are asked to deliver presentations online, the ability to master evolving webinar technologies and develop online speaking skills has grown more urgent. Knowing how to keep audiences on the edge of their seats with just your voice and slides beamed to the screens of mobile devices will be an increasingly sought-after skill in the future. 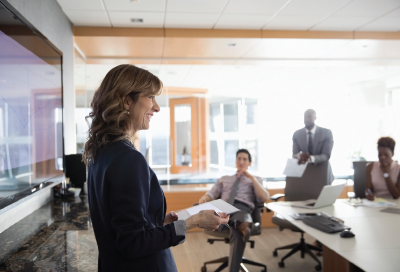 These were among the major themes at the recent Presentation Summit in Clearwater Beach, Florida, an annual conference with international flavor that showcases the latest presentation technologies, slide-design ideas and delivery tips in the industry. The Summit brings together many of the world’s top PowerPoint experts, presentation-skill coaches and technology vendors in the spirit of exchanging cutting-edge ideas and enhancing attendees’ presentation skills.

From Presentations to ‘Conversations’

One of the biggest trends in the industry is the growing use of mobile devices for facilitating “conversations” rather than delivering traditional presentations, says Tom Howell, creative director of Synapsis Creative, a presentation design agency in Sydney, Australia, who presented at the Summit.

“We’re seeing more people want to have two-way dialogues rather than give a traditional presentation, especially in smaller group settings,” says Howell. “The evolution of the iPad and tablets has made that possible because presenters can show slideware in small groups, putting more focus on back-and-forth discussion, answering questions and on interactivity than you can in many formal presentations.”

Howell says more of his executive clients are using tablets to make intimate sales pitches to customers or to present to colleagues. “They might have five or so people in a meeting and want to sit down with them using a tablet to show slides or other content, often passing the tablet around,” he says. “They’re finding audiences appreciate these structured but informal dialogues.”

Understanding audience expectations takes on even greater importance in these scenarios, Howell says. “If you hand someone an iPad during a presentation, they’re often expecting to interact with it and for it to behave like the apps they use in their everyday life,” he says. “That’s where we often see a disconnect, with presenters who want to put together slides in the standard way when presenting with tablets. You need to think outside the box in these situations.” 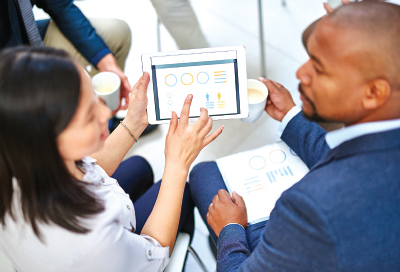 Howell encourages speakers to design slides for “nonlinear” conversations with audiences—avoiding committing to presenting slides in a particular sequence—which allows them to more easily move from topic to topic based on expressed audience interest.

“We often put together presentations for clients that are 100 slides long, but the presenter may only end up using eight or 10 of those slides because of what audiences require in the moment,” Howell says. “If you make people listen to you talk about product A when they really want more information about product B, you’re doing everyone a disservice.”

PowerPoint has long had the ability to hyperlink one slide to another to support this “leapfrogging” purpose, but Howell says many remain unfamiliar with the feature.

PowerPoint has versions of its slideware designed for iPad and Android tablets, and Howell suggests keeping your slide design simple—less is often more with tablet-based presentations—using uncluttered slides, few bullet points and avoiding flashy graphics. Pass the tablet around where it makes sense and encourage the audience to touch, swipe or scroll. For sales presentations, consider showing product photos or YouTube videos of client testimonials, he says.

Presenters also may want to connect their mobile devices to projectors or external screens and should know how to do so. Apple’s AirPlay device, for example, allows speakers to mirror presentation content from their tablets or smartphones to an Apple television screen.

Another conference theme was the continuing evolution of what’s known as immersive technology—systems that blur the line between the physical and simulated worlds and can bring valuable new dimensions and impact to presentations. While some of these tools have yet to achieve mainstream use, others have rapidly matured and are being used regularly in today’s presentations.

“The rise of augmented reality and virtual reality is helping presenters change the way they tell their stories,” says Lia Barnakova, a strategy and leadership consultant who works with Fortune 500 organizations to help them anticipate and stay ahead of market disruptions. Barnakova also shares innovative ways to use emerging technologies and PowerPoint on her popular YouTube channel.

In augmented reality (AR), virtual objects are superimposed over a real, existing environment to enhance the user experience. Environments are “augmented” with things like video, graphics, sound or even smell. Two examples are a car dashboard that can identify objects in front of a vehicle, overlaying a display of object details on top of what the driver is seeing in real life, and a virtual line displayed on a patient’s body to show a surgeon where to make an incision.

How might AR be used in a presentation today? Barnakova says a speaker could use the technology to “superimpose” videos on printed handouts for an audience. The speaker would install the first frame of the video on the handout, allowing audience members to scan that image with their smartphones and trigger playing of the full video on their phones.

One of the biggest trends in the industry is the growing use of mobile devices for facilitating “conversations” rather than delivering traditional presentations.

“Not only is the presenter leaving behind handouts, he or she is creating an additional layer of education and engagement with a video that further explains or demonstrates key points,” Barnakova says.

Toastmasters can use a free app called Aurasma to experiment with augmented reality in their own presentations; Barnakova created a tutorial on her YouTube channel that shows how to use the tool.

Microsoft also has added augmented reality features to its PowerPoint software, introducing a new suite of 3D tools for use on slides. Users can insert 3D models directly into presentations or documents to help illustrate points, to provide a 360-degree viewing perspective of products or other objects, with the ability to tilt up or down to show specific aspects of images.

A large collection of free 3D models is available through PowerPoint’s online catalog Remix 3D; the models can be customized for specific uses with a free tool called Paint 3D, Barnakova says. 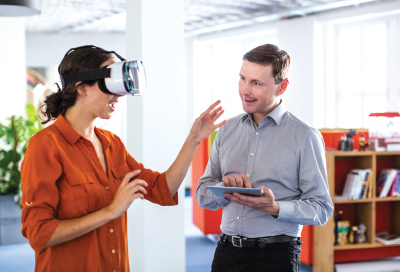 Virtual reality (VR) is another area of immersive technology that has gradually grown more affordable, user-friendly and practical for presenters. Virtual reality is an artificial, computer-generated environment that users can explore and interact with. One unique use of VR is to address the fear of public speaking, Barnakova says.

A company called Limbix offers a virtual reality experience designed to help users deal with a variety of phobias, including stage fright. The system was developed by technology experts and psychologists as a form of exposure therapy, using “real-world capture” video and mobile technology to create authentic environments built from panoramic images and videos, not animated graphics.

“Users put on a VR headset and see an audience sitting in front of them around a boardroom table—images of real people, not animated characters—and see their actual presentation slides on a laptop in front of them in the virtual room,” Barnakova says.

The process can start with neutral audiences then progress to more challenging groups who are yawning, looking at their phones or becoming disengaged. The system requires a Google Daydream headset that costs about 75 and a compatible smartphone, Barnakova says.

Another company called Byond also has a virtual reality system with potential for future use in presentations, she says. 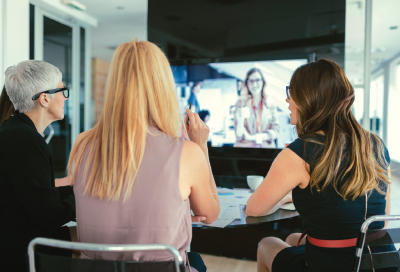 As the demand for delivering presentations online grows, so too does the need for speakers to master the skills needed to give effective webinars and webcasts. Ken Molay, president of Webinar Success, a company in Cary, North Carolina, that offers webinar training and consulting services, delivered a session at the Summit with tips and tactics for becoming a more memorable online presenter. What follows is a selection of Molay’s advice.

Simplify slide design. Participants will access your webinars in many different ways so adjust your slide design accordingly. “With remote attendees you often have no idea what’s happening,” Molay says. “They may be on a slow Wi-Fi connection or they might be viewing on a tiny screen on a mobile device.”

So simplify slide design and use strong contrasting colors, large text, graphics that are easily comprehended and beware of animation. “If you like using animated transitions from one slide to another, or if you use ‘fly ins’ on slides, those effects can often come out wrong or jerky on the viewers’ end and you have no way of knowing,” Molay says. Use simple “appears and disappears” or quick fades instead.

“The rise of augmented reality and virtual reality is helping presenters change the way they tell their stories.”

Use audience interaction strategically. It’s easy for remote audiences to become distracted by their smartphones or incoming e-mail, so using techniques to keep them engaged and focused is critical. Job one toward that end is to have quality content chock-full of real-world, relevant examples.

Webinar platforms allow presenters to use things like instantaneous audience polls, “things not possible when you’re presenting in-person to audiences,” Molay says. “In a room full of people it’s harder to ask, ‘how many of you believe A, B, C or D?’ and then receive instant, summarized responses on the screen.”

Presenters also can use the technology to provide a personal touch, since they can see a list of participant names on screen. “You might say, ‘Jim just typed in a comment and seems to believe this ... or Mary seems to indicate she does things a little differently,’” Molay says. “It builds a sense that you are having a two-way conversation rather than delivering a monologue.” 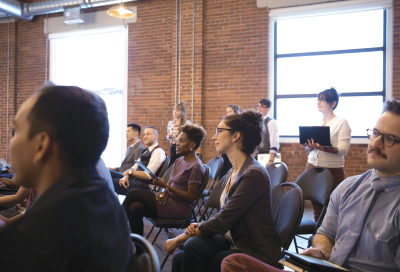 Presenters should be more “predictive” in how they plan and rehearse for webinars, Molay says, especially when it comes to audience involvement. “You can’t wing it the same way a speaker on stage is able to read an audience’s body language and switch gears if they sense boredom or restlessness,” he says.

Plan exactly where in your session you might insert an audience poll, where it makes sense to stimulate conversation through typed chat or when you might ask participants to click buttons to “virtually” raise their hands. “You need to factor in extra time for rehearsing with the technology so you can use it seamlessly,” Molay says.

Your voice is everything. Since most webinars only feature a presenter’s audio and little or no video, it’s vital to infuse the proper energy and variation in your voice, Molay says.

“Your voice is carrying the full load of expressiveness so you need to think differently about how you use it,” Molay says. “Abandon a conversational tone and put extra energy into your speaking style so you don’t sound flat. It might require going beyond your comfort zone, but it’s crucial to keeping audience interest.”