A Testament to Talismans

Good luck charms or special rituals give speakers a boost. 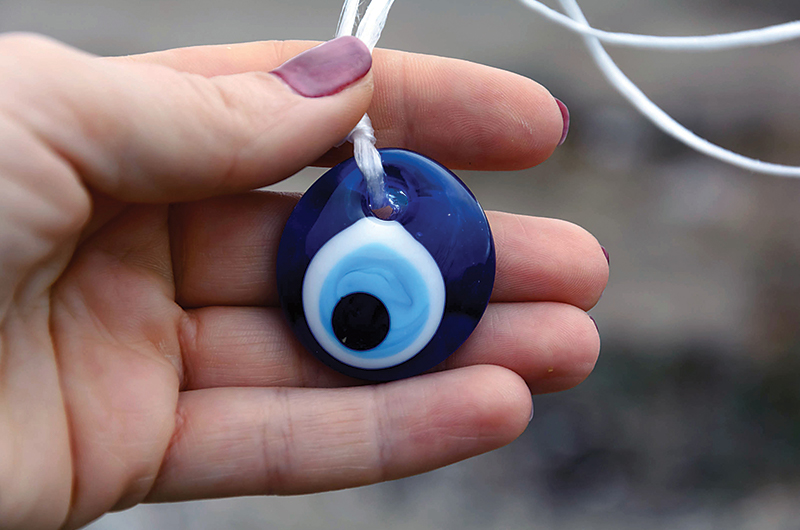 It’s believed the Evil Eye amulet will protect you from others’ harmful thoughts or wishes.

Even with ample preparation and practice, there were times when Rani P. Mohapatra, CC, CL, from IBM Blue Voice club in Kolkata, India, faltered. She would begin speaking to an audience and change from a lioness to a deer in headlights. “I realized confidence is not always directly proportional to efforts,” she says.

Over time, she searched for a talisman —something to bring her good fortune when speaking. One morning, she found it.

She was feeling groggy and grumpy. While brushing her teeth, she stared at herself in the mirror. “My gaze went into my own eyes, deeper and deeper. I saw my reflection as another person who was scared inside. I stared harder and told myself to stop being afraid and affirmed that ‘I am there for you.’ It felt magical!”

Some might call it speech preparation but Mohapatra calls her deep gaze routine her talisman—a ritual to empowerment. When she can’t perform it, she feels nervous and reverts to bad habits, such as speaking too fast and repeating herself.

Mohapatra is not alone. For Zoya Mabuto, CC, of The Social Network Toastmasters club in Johannesburg, South Africa, the ritual starts with breathing exercises to calm nerves and achieve harmony. Inspired by other successful speakers, she then performs power poses to build energy. Lastly, particularly for major events—she has won Toastmasters speech contests and given a TEDx Talk—she mentally puts on her “long, bushy fox tail,” which helps with posture and presence. Then her ritual is complete.

The tail visualization came from a speaking circle warm-up exercise. Everyone was asked to imagine they had a tail. At first, Mabuto thought it was crazy. But she tried it, picking a fox tail “because it’s regal” and fits her physicality. Now she recommends it to her own public speaking clients. Many are skeptical but she sees it transform people. “I see a spring in their step and an added level of confidence,” she says.

Talismans can be activities but are more often associated with items believed to protect against evil forces. They can also be good luck charms. The idea of talismans is more than 5,000 years old. There are many examples, with rich and varied histories found throughout cultures worldwide. One is the Evil Eye amulet, an ornament or small piece of jewelry.

Known as Nazar in Turkey or Mati in Greek, the Evil Eye definition and history can vary depending on the culture, but at its core it is about looks or glances that bring harmful thoughts or wishes. The Evil Eye amulet is said to protect against these bad thoughts and is prominent throughout the Mediterranean, Middle East and increasingly the rest of the world. 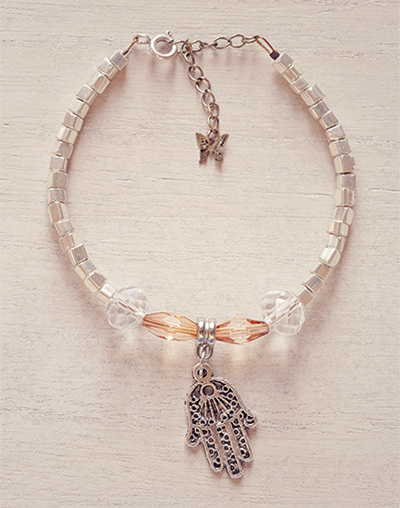 The Hamsa Hand is a talisman said to bring happiness and good fortune.

The Hamsa Hand, also known as the Hand of Fatima, is another symbol used to ward off the Evil Eye and bring happiness. A small sampling of other talismans includes Native American dreamcatchers, Chinese lucky character symbols, four-leaf clovers, horseshoes and images of elephants.

Some people have their own unique items. Stacey Shipman, DTM, from Hanover Toastmasters in Massachusetts, created a logo when she owned a yoga and fitness business. The logo’s meaning has evolved over the years. A heart surrounded by three open circles now signifies growth in confidence, connection and communication. “It represents courage—to be seen, be heard and be bold,” she says.

Shipman has logo-adorned jewelry and T-shirts and sells them at her events. She will wear her jewelry, particularly for high-stakes events, and rub the logo for assurance. It reminds her to be brave and helps her focus. As a communications coach, she suggests others develop similar anchoring tools and skills.

Aaron Leung belongs to three clubs in Hong Kong. Like Shipman, he uses talismans to serve as reminders: photos on his phone, a ring, and a fish symbol on his key chain. Together the items represent happiness, confidence, courage and reflections of his Toastmasters journey. Without the items he would feel lost, he says.

People around the world have relied on talismans for thousands of years—and counting. While nothing replaces preparation and practice for effective public speaking, talismans might help when you need something more.