Funny You Should Say That
April 2018

Read All About It

A good headline makes you want to read on. Alas, so many accomplish the exact opposite. 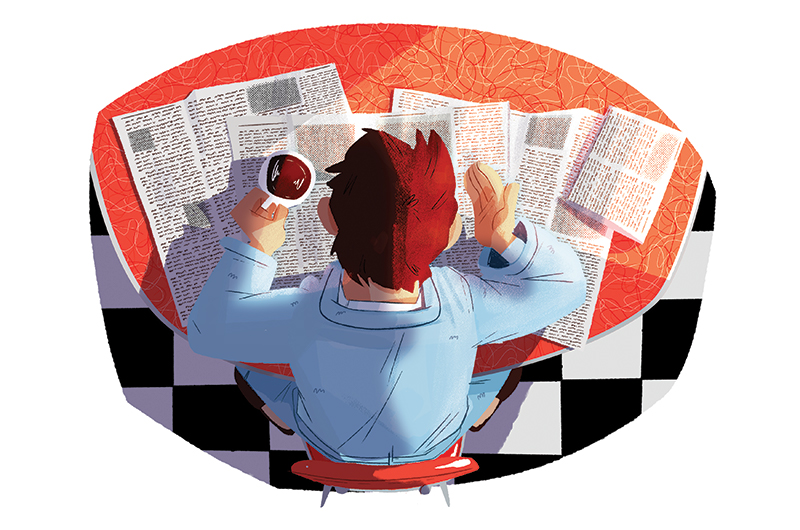 I have a tacit agreement with the people who write news stories: If you can intrigue me with a really good headline, I’ll read your piece. It’s surprising how seldom this happens. The Huffington Post apparently thought they could grab my attention with 18 Things You Didn’t Know You Could Do with Aluminum Foil. Seriously? First of all, I’m glad I don’t know 18 things you can do with aluminum foil. It means I have a life. Second, there aren’t 18 things you can do with aluminum foil. There are two. The first is to seal leftovers into the Tupperware container when you lose the lid, and the second is to make a little pointy hat so you can receive messages from outer space.

Then there’s this from the New York Daily News: 5 Safety Tips to Avoid ­Becoming a Summer Vacation Casualty. Sorry, folks, but when you pair “casualty” with “summer vacation,” I’m out. I don’t read stories when the headline makes me flinch.

And this from the New York Post: Chaos in the Hamptons Over Everything-for-5 Sale. The Hamptons comprise an enclave on Long Island, New York, inhabited by some of the wealthiest people on the planet, and they want to tell me about millionaires fighting over 5 sale items? Granted, in the Hamptons a 5 sale item could be a diamond-encrusted Versace handbag, but still—as much as I don’t like headlines that make me flinch, I definitely don’t like ones that make me sick.

Even the illustrious New York Times is prone to disappoint. In August of last year, the editors devoted two whole pages to a story entitled The Secret Life of the City Banana. They want me to read about what happens to a banana—a banana!—from the day it arrives at the New York docks in the dirty hold of a cargo ship to the moment it goes into my mouth. Boy, if there was ever something I do not want to know. On the other hand, if the article had been entitled Why Bananas Have Those Little Stringy Things You Have to Peel Away Before You Eat Them, I would have been all in.

The August Times missed again with this one: We Need to Talk Some More About Your Dirty Sponges. No, we don’t. I experience deep, crippling shame about my dirty sponges and I would prefer not to talk about them—especially in a mass circulation newspaper, thank you very much.

Perhaps the Detroit Free Press will offer something more tempting. Ah, here’s something: Yoga Twerks to Hip Hop’s Gritty Trap Sound. I have a rule: If I don’t have the slightest clue what a headline means, I’ll read the article to find out what I’m missing. I have another rule: Never read anything that promises to contain no useful information whatsoever. Which rule to follow? In the end, I passed on the article because (a) I don’t practice yoga, (b) I don’t understand hip hop, and (c) I don’t listen to music described by an adjective that reminds me of sandpaper.

So what headline did get me? It was in the New York Post’s Marriage Proposal on Top of Cliff Goes Horribly Wrong. Yes, I have a weakness for bad things that happen to other people. So do you. Admit it.

It happened in Cornwall, England. A man planned to propose to his fiancée during a romantic hike along the cliff tops, but instead slipped and broke his ankle. I felt terrible. Not for the couple. For myself. Here I was looking forward to something horrible and all I get is a lousy broken ankle. What did I want—a fatal plunge from 400 feet dashing the hopes and dreams of a loving young couple? Well … yeah, sort of. So now I feel cheated … and guilty for feeling cheated. And when a headline can make you feel cheated and guilty—not to mention frustrated that you didn’t even get the perverse pleasure of thinking Thank God that wasn’t me!—that’s the worst headline of all.