By Lisa B Marshall 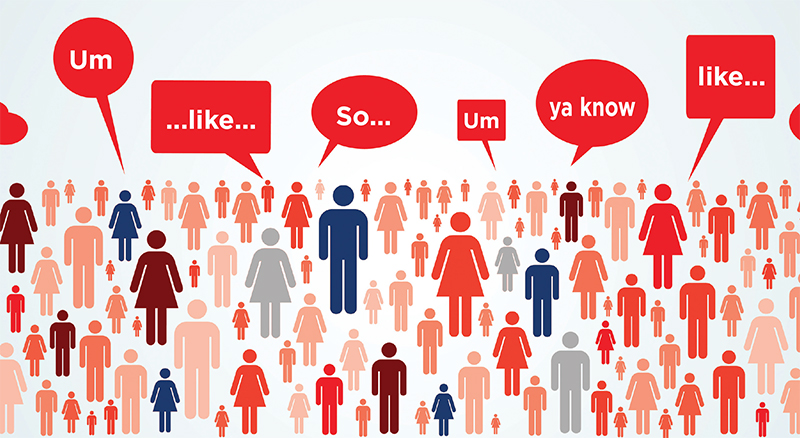 Recently I was interviewed by a New York Times reporter and at times it was difficult for me to focus on the content of my responses. Frankly, I was worried I’d let a stray “um,” “ah,” or “so” slip from my mouth. Why was I so concerned? The reporter was asking my advice on how to keep our language filler-free.

He wanted to know more about disfluencies. Never heard that term before? Sooooo, um, disfluency is, like, an academic term, ah, that is used to describe speaker he-he-hesitations, repeats, repeats, or expressions such as um, ah or ya know. As you know, in Toastmasters this is the primary purview of the Ah-Counter (which is a much catchier title than disfluency-counter, don’t you think?).

If you’ve ever been singled out by the Ah-Counter, it might help to know that our spontaneous speech is naturally disfluent—as natural as peas in a pod. In fact, a conservative estimate for the rate of vocalized disfluencies is six words per 100. That means if you speak at a typical rate of 150 words per minute, you should expect to say nine filler words in just one minute of speech! And it often gets worse when we are nervous or the subject is difficult or demands effort (in speaking and listening).


Why Isn’t Our Speech Fluent?

Early studies suggested we verbalize hesitations because our parents and teachers condition us to respond immediately, and when we don’t have something to say, we feel compelled to fill the uncomfortable silence. However, today most researchers agree that disfluencies aren’t just fillers; instead, these expressions communicate meaningful information. For example, we use um and ah to hold onto the “conversational floor” as we are planning what we are going to say next, with ah signaling a short delay and um signaling a longer delay.

Other research suggests that certain groups use disfluency as an expression of solidarity. For example, when a group of twenty-somethings talk among themselves and, like, totally infect their conversation with verbal viruses—it’s, like, totally cool! At least to them. (For outsiders, not so much—but we’ll get to that).

In addition, disfluencies are used to signal emphasis: She reads, like, TEN books. Or correction: Open the gree-,ah, blue book. We now know that not only do disfluencies improve attention, they also improve later remembering. This finding led a researcher to suggest that public speakers, policy makers and teachers would be better off including the occasional disfluency rather than giving perfectly scripted, error-free presentations.

So then why, as Toastmasters, should we be concerned with our expressions of hesitation? Notice the expert said occasional disfluency. When disfluency becomes repetitive and excessive, especially to the point of distraction, that’s when it becomes a problem. In addition, in high-stakes situations we have a higher expectation of fluency, and when the speaker is hesitant, it often leads to negative perceptions. In fact, disfluent speakers can be perceived as nervous, unprepared, lacking competence, lacking confidence or even as deceitful. In short, these verbal viruses become credibility killers. That’s why it’s important to learn how to reduce them but perhaps not entirely eliminate them.

Most experts suggest a seemingly simple solution: Replace verbalized pauses with silence. But that’s easier said than done. In my experience, most people are not fully aware of how much they hesitate or which particular situations transform their speech from acceptable to problematic.

So the first step to replacing ahs and ums with silence is to identify them in yourself and others. Try recording your speech patterns in a variety of settings: during meetings, work presentations, speeches, casual conversations and more. It is important to listen to and review at least five minutes of recorded speech daily for at least 14 days. Simply listen and actively acknowledge each hesitation in an effort to become painfully aware of your particular pattern. Ultimately, the goal is to recognize when you are just about to utter an expression of hesitation—but that takes time and work.

Ultimately, the goal is to recognize when you are just about to utter an expression of ­hesitation—but that takes time and work.

It’s also important to begin noticing which particular situations are troublesome for you. For example, during a recent Toastmasters meeting I was assigned the role of Ah-Counter. One of the prepared speakers delivered her speech and I dutifully counted the disfluencies. She didn’t have that many. But after her speech, someone asked her a few questions. During that time her ahs, ums and ya knows almost tripled. It turned out the conversation was politically sensitive and she had been carefully choosing her words (which jibes with the research about talking in difficult situations). Now she knows that when she talks about this topic and other sensitive ones, she needs to monitor and regulate her speech more carefully.


What Else Can I Do Besides Pause?

Here are two simple tactics when delivering speeches. First, remind yourself that during a speech no one is going to interrupt you—so you don’t need to signal that you’ve got more to say! Believe it or not, that simple reminder can really make a difference. Next, use more gestures (even when no one else is physically with you). Although researchers have not identified exactly why, fewer gestures equates to more disfluency.

Another helpful technique is to use shorter sentences. Research has shown that when you reduce your mental processing load, you’re more likely to increase your fluency. After eight years of recording a weekly podcast, I noticed that simple sentences are much easier to say without tripping up. If you’re a person who likes to write out what you plan to say, be sure to eliminate compound sentences, never start with a prepositional phrase, put most of your sentences in subject/predicate order and eliminate any vocabulary that you have difficulty saying without hesitating. The basic idea is to write for the ear, not the eye! Or better yet, if you feel compelled to write your speeches, then start from your spoken words and transcribe them.

If you want to see a big difference, slow down. Try using diaphragmatic breathing, which for most people takes effort to learn and practice. Not only will it help to slow your speech, it will also slow your heart rate and help to reduce any anxiety. More importantly, it allows you to replace disfluencies with a specific physical behavior—a long five- to six-second breath—between the end of one thought and the start of the next one. If executed properly, it will force you to create a silent pause. It may feel awkward, especially with such a long silent pause; however, it’s worth it because disfluencies that come just before a new idea is expressed are judged more harshly than others. Of course, another way to slow down is to deliver fewer messages so you know you have plenty of time to deliver your material with passion and expression.

Remember, hesitations in our speech are not just fillers—they have meaning and serve a purpose. In some cases they can improve attention and retention. But if used excessively, they can create negative perceptions. Your goal should be reduction, not elimination. I hope you’ll use these tips for your next speech.

Lisa B Marshall is a communications expert who delivers consulting and workshops, the author of Smart Talk and Ace Your Interview, and host of the Public Speaker and Smart Talk podcasts. Learn more by visiting her website.