Funny You Should Say That
September 2017

These examples come free with your conscription to this magazine. 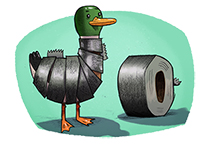 I used to live across the street from a woman named Helen, who had a wonderful way with words. Noticing the ground cover surrounding my home, she complimented me on my beautiful patch of “pachydandruff.” Another time she asked if I had any “duck tape” she could borrow. I briefly thought to correct her—the image of a duck wrapped in tape being slightly disconcerting—but I didn’t because I realized that here before me stood a source of entertainment far more creative than anything on television. And free!

Mistaking pachydandruff for pachysandra and duck for duct are linguistic mash-ups known as malapropisms. Grammarians call it the “use of an incorrect word in place of a word with a similar sound.” I call it fall-down-funny and I can’t get enough. I wish I had collected all of Helen’s malaprops, but there is no shortage to draw from. Look no further than the world champion of twisted syntax, Yogi Berra, to hear that, when it comes to American presidential elections, “the state of Texas has a lot of electrical votes.” Or the former prime minister of Australia, Tony Abbott, who expressed, with all the gravitas of a respected head of state, that “no one, however smart, however well-educated, however experienced, is the suppository of all wisdom.” Suppositories have their use, of course—and a valuable one it is—but they are a far cry from the intended “repository,” which holds things rather than loosens them.

The Irish politician Bertie Ahern warned his country against upsetting the apple tart.

The comic gold inherent in malaprops is not lost on the professionals. Stan Laurel of the famous American comedy team Laurel and Hardy worried that his partner was having a “nervous shakedown” because he kept referring to the Exalted Leader of a group they belonged to as their “exhausted” leader (which may have been true; just not what was intended).

In the political arena we have Welsh Conservative leader Andrew RT Davies encouraging his colleagues to make breakfast a success (he meant Brexit). Not to be outdone by the British, the Irish politician Bertie Ahern warned his country against upsetting the apple tart. He meant cart, of course, but turning an apple tart upside down has its consequences, too, especially if it ends up in your lap.

Back in the good old USA, Richard J. Daley, the infamous late mayor of Chicago, was not one to mince words, except when he turned them into mincemeat. To Mayor Daley, a tandem bicycle was a “tantrum bicycle” and no one could tell him otherwise. As for those with a weakness for strong drink, Alcoholics Unanimous was the mayor’s sage recommendation.

During the last American presidential campaign we got to know a little more about Rick Perry, the then-governor of the state with all the “electrical” votes—Texas. In his passion to maintain America’s competitive edge on the global stage, Perry urged all the states to become lavatories of innovation. And be sure to wash your hands afterward.

Malapropisms are so funny that one has to wonder if some of them aren’t intended. For instance, there’s the man who said, “Having one wife is called monotony.” He meant monogamy. Or did he? And the woman who remarked, “I have a very photogenic memory.” Photographic is the correct word, of course, but perhaps she was looking for a modeling job.

I’m sure you all have your favorites as well. With our natural tendency for the mind to so often out-race the tongue, verbal slip-ups are inevitable. My all-time winner came when I took my then-6-year-old son to Starbucks for breakfast. As he drank his chocolate milk he asked me if I was drinking decapitated coffee. Beat that. I dare you.