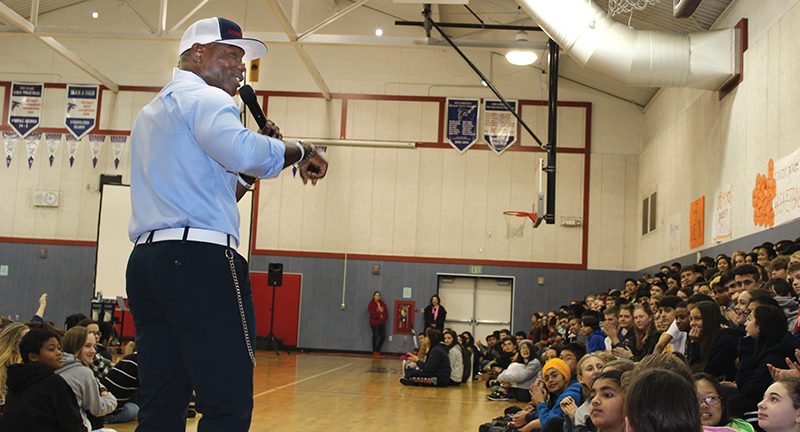 Kevin Bracy speaks to students of all ages about the need to eliminate bullying from all school campuses. Photo by KAMS Yearbook 2016-17

Imagine a high school gymnasium overflowing with students, faculty, staff and supporters, all roaring with positive enthusiasm. “Each one, reach one! Each one, reach one!” Leading this chant is a charismatic figure named Kevin Bracy, whose fervent anti-bullying message is a staple in Northern California schools.

In 2014 Bracy created the REACH One Alliance, a bullying prevention and character education program in middle schools and high schools. The concept grew out of his frequent speeches to students about the need to eliminate bullying and to demonstrate leadership, vision and ­character. The “each one, reach one” slogan highlights accountability. Bracy asks for a commitment from everyone: teachers, custodians, ­students, campus monitors and the school administration.

“We all have the ability to reach out to one other person with kindness and compassion every day,” he says.

Bracy, who joined Toastmasters in the late 1990s, is a commanding presence on stage. The onetime professional baseball player, still strong and fit, boasts a powerful voice and a forceful delivery. When he speaks about bullying, he mixes sobering statistics with personal stories of his own journey.

Bracy says he grew up in an abusive home environment where his father was violent toward his mother when he was under the influence. Filled with anger and sadness as a teen, Bracy lashed out at fellow students, becoming a bully himself.

“In high school, I was an athlete, so I could say stuff to make people look stupid and feel stupid,” he recalled in one speech, “and everybody laughed because I was popular and I was cool.”

His life changed when he was invited to live with a stable family who provided him with encouragement and support. Bracy tells students they all are leaders in their own way, and as leaders they must show compassion to other students and have “zero tolerance” for bullying on their campus.

School administrators say Bracy’s ability to communicate with people extends well beyond the stage. “To say that Kevin is charismatic doesn’t accurately describe the impact I have seen him have,” says Renee Mello, former supervisor of drug-, alcohol- and violence-prevention programs in the San Juan Unified School District in Carmichael, California. “What I appreciate is even when the room is filled with people, when you are in front of Kevin he makes you feel like you are the only one there. You walk away feeling heard and connected.”


Taking the Next Step

Bracy credits his Toastmasters experience for preparing him to be a professional speaker. When he joined the River City Speakers club in Sacramento, California, Bracy was already a successful business owner. He and his wife, Jessica, were co-owners of an off-campus bookstore for Cosumnes River Community College in Sacramento. Bracy was praised for his speaking ability in business settings, but he wanted speaking success beyond that. The consistent practice in Toastmasters meetings, he says, boosted his confidence and skills to a new level.

“Toastmasters was the bridge [to professional speaking] for me,” he says. “Whenever a speaker was requested, I would volunteer.”

Soon Bracy was hired to travel across the United States giving speeches for Monster’s Making It Count program, aimed at students applying for college. By the end of 1999, he was averaging 140 speeches a year. Meanwhile, in 2000 he came in third place in the Toastmasters International Speech Contest in Region 1 in the western United States.

“Kevin was very focused from the very beginning,” says Marty Taub, DTM, one of Bracy’s mentors from River City Speakers. “He really wanted to improve and actually took the steps to do that. He sought out mentors that could help him in different settings.”

One of Bracy’s most important mentors was motivational speaker Les Brown, recipient of Toastmasters’ 1994 Golden Gavel award. Bracy joined Brown’s Speaker Network in 2002 and traveled around the U.S. with him for two years.

Brown applauds Bracy’s dynamic style of reaching students. “I’ve been doing this work for over 30 years, and I’ve never seen youth respond like this before,” he says. “No other speaker that I’ve ever coached or trained is doing it like this.”

Bracy is no stranger to success, but he is also well acquainted with overcoming tough circumstances. As a youth, his painful family situation led him to behavior and academic problems at school. After he was taken in by a supportive family, Bracy blossomed as an athlete and worked hard in the classroom. Eventually, he earned a full scholarship to the University of Utah, where he was a standout baseball player. After college, he played minor league baseball in Canada.

Years later, as Bracy worked as a professional speaker, the national and local spotlight began to focus on the devastating effects of bullying on students, parents and schools. Jason Harper, founder of the Character Combine, an educational program for sports coaches and athletes, recruited Bracy to work with him at an anti-bullying event. Bracy asked himself, What in my life can I use for this? He quickly realized, Oh my gosh, I was that guy! He had been a bully. After that first successful event, Bracy became one of the best-known anti-bullying speakers in the area.

He was called upon in times of tragedy. When students committed suicide, schools asked Bracy to help bring their community back together. “I remember one time there was a boy in Folsom [California] who was bullied and died,” recalls Taub. “Kevin was just so impactful going out and interacting with that group with the pain that they were experiencing at that time.”

Mello, the former administrator with the San Juan school district, approached Bracy one day after Bracy led a rousing school assembly. She told him, “We need your program, the ‘reach one’ program.” When Bracy replied, “It’s not a program—it’s a chant, a phrase, an assembly,” Mello looked him directly in the eye and repeated, “We need your program.”

Bam, Bracy said to himself. There it is. With a sense of urgency, he developed the REACH One Alliance. “I looked at my experience with schools over the years, and I used my common sense for what I know students need in order to have better self-esteem.”

REACH exists as a self-sustaining campus club on middle school and high school campuses. It features daily messaging and regularly scheduled events. Bracy says his mission is to create a momentous positive shift in school climate and culture, extending to students, teachers, parents and the surrounding community.

Bracy initially instructs REACH members on how to develop as student leaders and reach out to at least one person a day to practice kindness, compassion, inclusion and service. He stresses the importance of academic performance, citizenship and demonstrating “greatness.” (Bracy is known to students as Coach Greatness.) A modified version of the program is also in elementary schools.

“I’m so thankful Kevin stepped out of his comfort zone and started speaking at the elementary-school level,” says Beth Bartkowski, a third-grade teacher at Lake Canyon Elementary School in the Sacramento area. “My students cheer when they know Coach Greatness is coming to visit our room.”

Bracy has a 23-year-old daughter, Kendra, and a 16-year-old son, Kobe. (Another son, Kaleb, died shortly after his birth.) In addition to his efforts in the schools, Bracy works as a trainer, running the Kevin Bracy School of Motivation. “I have a passion for developing speakers from the ground up to earn a living through speaking,” he says.

Clearly, he also has a passion for inspiring young people to do the right thing. Reflecting on his journey toward his life’s calling, Bracy expresses gratitude for the skills he honed in Toastmasters.

“Toastmasters was huge. I’m at a place in my career where I feel very fortunate. I don’t take one moment or one word for granted.”