October 2022 View PDF
×
Club officer paying dues? Click here to access Club Central. Please note: due to the volume of renewal payments and club business, you may experience delays in accessing areas of our website. 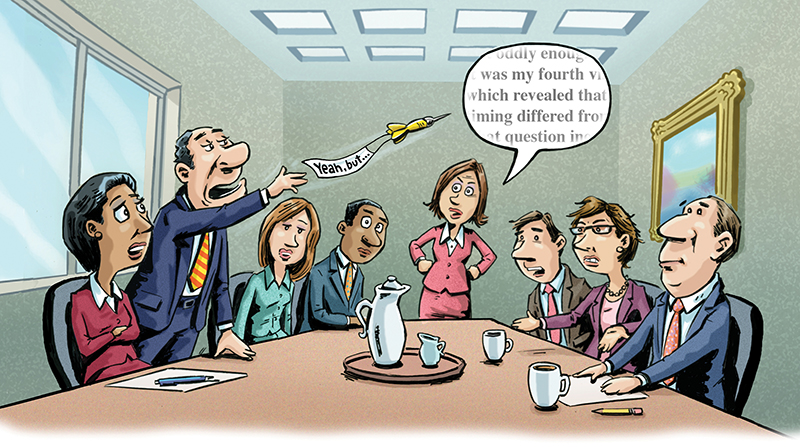 If you don’t already know this one, ask your kids—or any kid, because no kid can resist pulling a fast one on an adult—to tell you the “interrupting cow” knock-knock joke:

Cute, right? Gives you a little chuckle? Then what happens? You think about it a little more and before you know it you are giving some serious thought to grinding your teeth.

Why? Because we all hate to be interrupted. Or drowned out. Or conversationally dominated. We despise, secretly or otherwise, the verbal interloper. This scourge can appear in the guise of the loud talker, the close talker, the conversation hog, the story topper, the quick interjector, the extra-long joke teller or the questioner who never waits for an answer. They all share one basic infuriating aim: They want you to shut up and yield the floor, and they want you to do it right now.

Your first impulse might be to slip a few dozen tablespoons of hot sauce into the yakker’s double decaf latte, but, being the inventive Toastmaster you are, you ponder less explosive solutions (even as you eye the Tabasco longingly).

Check out these ideas to get the more civilized wheels turning:

If we take our cues in everyday conversation from much of modern political discourse, we may come to believe that bombast equals victory and good listening equals defeat. I shout ’em down and shut ’em up, I win; I keep my mouth shut, I lose. But that’s not conversation, that’s verbal bullying.

So why do so many people do it? The late American philosopher and educator Mortimer Adler, in his book How to Speak, How to Listen (1983), wrote that schools do not teach listening as a skill at any academic level. This leaves many adults unprepared to engage in truly intelligent conversations.

“Is anyone anywhere taught how to listen?” Adler asked. “How utterly amazing is the general assumption that the ability to listen well is a natural gift for which no training is required.”


Don’t be Dominated by Interrupters

Parlor conversation is one thing. But what if you’re in the bare-knuckle netherworld of the business meeting, sitting around a table waiting for a serial interrupter—the person who loves to score points through the domination of others—to strike again? How do you deal with the occasionally malicious verbal counterpuncher?

No less an authority than celebrated funnyman John Cleese, of Monty Python fame, lays out a handful of semi guerrilla tactics in a video called Meeting Menaces (one in a series of popular business-training videos from Cleese). First, however, he points out that not all interruptions in meetings are bad. Interjections to “save time or to correct mistakes” are fine as long as they’re quick and useful. He calls such breaks “running repairs to the discussion.”

Today’s interrupters, writes Connie Dieken, are a new breed. Often they aren’t merely rude, but rude and in a hurry. She calls them “The Chronically Impatient.”

It’s the egregious interrupting windbag who’s the true culprit. The initial speaker can lose control of the situation and “completely swallow the interrupter’s change of agenda.”

“Letting the interrupter take over isn’t the answer,” says Cleese. Neither is simply telling the verbal interloper to shut up an option. Assuming the meeting is chaired, the best defense, says Cleese, is to “keep your cool, ignore the interrupter and appeal to the chair.” And if that fails? The “ultimate deterrent,” says Cleese, is to pack up and start to walk out. Severe? Yes, but “it’s very unlikely that it will ever come to that,” says Cleese, “and if it did, it would be very surprising if the chair didn’t call you back.” Timing, of course, is everything.

One strategy that may disarm the serial interrupter before he or she can pounce, says Cleese, is to begin your floor time by stating how many points you’re going to make. This helps to close the yakker’s windows of opportunity from the start.

Another awkward and frustrating situation can occur when you give a speech—typically outside of the courteous environment of Toastmasters—and during a question-and-answer session, when you’re confronted with a questioner who goes on and on and on. They hog the Q&A time, to the extreme irritation of other audience members. In a June 2008 article for the Toastmaster magazine, author R.J. Stove described this kind of person as the “Never-Ending Questioner”—“or, rather, the interminable speechmaker who offers up his unsolicited biography and hopes it’ll be accepted as a question.”

Stove’s solution for handling such a boor? Say something like, “I’m sorry, I’m not quite sure what your specific concern is. Could you perhaps approach me about it afterward?” “In nine cases out of 10,” notes Stove, “the Never-Ending Questioner won’t accept this implied invitation.”


Be Decisive and Confident

Interrupting can be a form of domination and, depending on the degree, sometimes needs to be dealt with instantly and decisively. “Sometimes you must return the dirty deed with a polite retort—something like, ‘Excuse me, Debbie, but I didn’t get to finish. I’d like to add that ...’ ” writes business-communications consultant Connie Dieken in her Influence blog.

Today’s interrupters, writes Dieken, are a new breed. Often they aren’t merely rude, but rude and in a hurry. She calls them “The Chronically Impatient.”

“Buoyed by instant technology and addicted to speed, these pragmatic people are having a tough time tolerating long-winded ramblers,” she writes.

“The Chronically Impatient value time, clarity and action, and they want you to get to the point, pronto. If you dilly dally, they’ll either nudge you with a brief interjectory question or they’ll outright overpower you and butt in as if your words don’t matter.”

How to keep them at bay? When you’re speaking, be confident, don’t be long-winded or hog the floor, and stop “speed talking.” “If you’ve ever received feedback that you’re a fast-talker,” writes Dieken, “chances are you’re often interrupted. Why? After all, you’re talking as fast as you can. Bingo! Some people can’t digest what you’re saying at a high rate of speed, so they cut in to catch up.”

Dieken offers her own fail-safe weapon to use in the war of words: Keep right on talking. If you’re dealing with a relentless interrupter who just won’t quit, she says, then the last-ditch—and unconventional—approach is to push ahead with your own words and add more volume to them. That, she says, “delivers a jarring and unmistakable message. It conveys that you’re sick of being rudely interrupted and you’re just not taking it anymore.”

Patrick Mott is a Southern California based writer and regular contributor to the Toastmaster magazine.